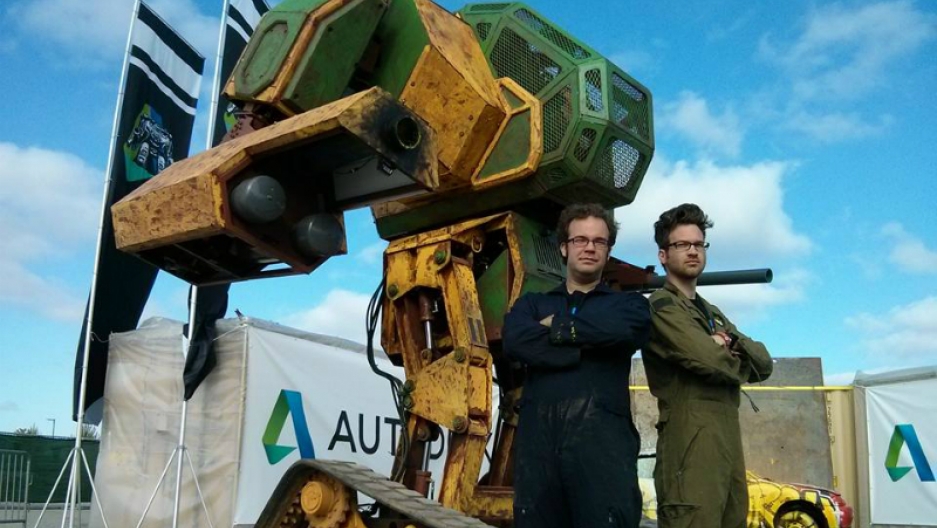 You've seen them inmovies likeTransformers andPacific Rim,and stepped behind the controlsin video games likeMechWarrior. But giant fighting robots havealways been fantasy --- until now. A company calledMegaBots, Inc.recently completed construction of a real-life "mech": a12 ton, 15-foot-tall paintball-shooting behemoth called the MegaBot Mark II. A pilot controls the Mark II from a cage insidethe robot's body, and for those who grew up playing the video game versions,seeingthe real thing in actionispretty thrilling. There's only one thing missing: an opponent (junkyard cars don't count). So MegaBotsissued achallenge to their rivals, the Japanese robotics company Suidobashi Heavy Industry, toa fight sometime next year. That's right, there are two companies working ongiant fighting robots. They're just doing it for fun, though! Nothing to worry about.

The challenge video earned nearly 3,000,000 views in just four days. Then, on Sunday July 5, Suidobashi replied with this:

So what's involved in getting ready for a giant robotic deathmatch? "The next steps are figuring out the ground rules that we can all agree to, deciding on a location, figuring out how to get both robots to the location, and then upgrading our robot for the fight," wrote Gui Cavalcanti ofMegaBots in an email to Studio 360. Last week, MegaBots accepted Suidobashi's acceptance (so many formalities with this dueling stuff) with a new video, playing up the whole 'Merica angle.

YouTubecomments are flooded withtalk of gettingtickets to the fight, possible entrants from other countries, and, of course, wagers over whowill win. One potential obstacle: the MegaBots founders mentiona Kickstarter tohelp themmakethe next round of improvements on the Mark II, but their last attempt at crowdfundingdidn't go sowell. Despite getting lotsof press, their November 2014 Kickstarter failed to reach its goalof $1.8 million. Maybe this time, with national pride on the line, they'll find a few more backers.