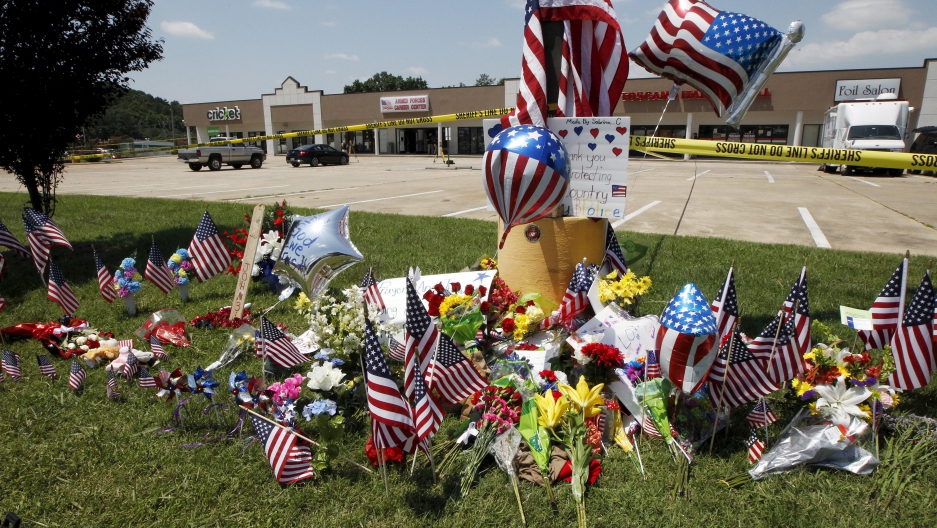 Items left at a memorial at the Armed Forces Career Center are seen in Chattanooga, Tennessee.

Police called it a “tragedy that no community should have to experience.” Dylann Roof, a sandy haired millennial, entered the Emanuel AME Church in Charleston during a bible study meeting, spent an hour sitting amongst African American parishioners before methodically shooting and killed nine of them. Now, 30 days later, Roof stands charged with nine counts of murder.

The Justice Department is considering charges against Roof, but has yet to decide whether to pursue the case as a hate crime or as an act of terrorism. That decision rests on whether prosecutors think they can meet the legal threshold for terrorism. And that standard is high, says Donald Stern, a former US attorney for Massachusetts,.

“Anybody who does some act of violence with some political purpose designed not just to harm or to kill the intended victims, but intended for a larger purpose; intended to instill fear or something like that in a larger community, in my view they’re terrorists.”

That would appear to apply to Dylann Roof, who before the shootings posted a rambling manifesto online explaining why he wanted to target black people in Charleston:

“We have no skinheads, no real KKK, no one doing anything but talking on the internet. Well someone has to have the bravery to take it to the real world, and I guess that has to be me.”

In June 26, when President Barack Obama eulogized one of the victims of the shooting, the Rev. Clementa Pinckney, he had no doubt this was an act of terror.

“It was an act that drew on a long history of bombs and arson and shots fired at churches, not random, but as a means of control, a way to terrorize and oppress.”

Yet, officials at the White House and the FBI, so far, have been reluctant to use the terms terrorism or terrorist in connection with the Charleston shooting. FBI Director James Comey in June explained why he does not believe Roof’s alleged crime fits the legal definition.

More perspectives on the word "terrorist"

Of course the Charleston shooting was terrorism. The question is, what’s the best response?

Should we call Dylann Roof a terrorist?

How Norway threw away the term 'lone wolf'

“Terrorism is an act done or threatened to in order to try to influence a public body or the citizenry, so it’s more of a political act and then, again, based on what I know so far, I don’t see it as a political act.”

But while the definition may be correct, says Northeastern University law professor Daniel Medwed, the conclusion is flawed.

“If you look at the FBI’s definition of terrorism, it cross references a definition contained in the US code. So that’s one definition from the FBI, but it departs from how other people have defined terrorism. Some people seem to consider it in a much broader light as any act designed to send a message to intimidate a group to reflect some type of larger political message.”

Medwed says that can lead to only one conclusion.

“I feel quite comfortable in branding Dylan Roof as a terrorist.  His acts in Charleston qualify as an act of terrorism. They were dangerous acts meant to intimidate the African American community and arguably influence government policy in the area of race relations.”

One thing is clear: If Roof had set off a bomb rather than using a 45-caliber handgun we might not be having this debate. Incidents involving weapons of mass destruction (WMD’s) — no matter domestic or international — are more clear-cut, says former US Attorney Michael Sullivan. “It is an act of terrorism.”

By example, he points to an incident that occurred in the summer of 2001. It was centered in Boston’s North End, where neighbors took pride in knowing everyone coming and going.  But they had no idea that a would-be-bomber was in their midst. Leo Felton, at 6-foot-7, should have stood out, even with his neo-Nazi tattoos hidden beneath black shirts and baseball hats. A store merchant said she never saw him coming:

“Yeah, you know he’s a big guy, so if he came in we could not have missed him. But I guess when it comes down to what he was all about, he probably didn’t want people to see him.”

What Felton was all about was trying — in his words — to start “a racial holy war.” He and a companion, Erica Chase were plotting to bomb the Holocaust Memorial at Faneuil Hall. In their Salem Street apartment, FBI agents found a 50-pound bag of ammonium nitrate, the same compound used by Timothy McVeigh to blow up the federal building in Oklahoma City in 1995. Felton and Chase were convicted of conspiring to commit terrorism and a hate crime. Sullivan, the US  prosecutor at the time, said there was little debate:

“What is the purpose of bombing the Holocaust [Memorial]? It goes beyond kind of the more traditional crimes of violence.”

Sullivan was appointed as US Attorney right after 9/11 and in addition to Felton and Chase, his office prosecuted the so-called shoe bomber, Richard Reid. And based on his experience, Sullivan says Dylann Roof would qualify as a terrorist.

“It would appear that the act was done to provoke a race war. It put a segment of the population in a state of fear. So I think, legitimately, you can easily describe it as a terrorist act.”

So what difference then does it make if Roof is charged with terrorism or committing a violent hate crime, because they are both capital offenses? Medwed says it does matter because of the message conveyed. One is considered a crime against some. The other, a crime against us all.

“There is this symbolic idea that a hate crime is more personal and it doesn’t relate to broader issues in society. Whereas an act of terrorism is often associated with a larger political movement. And by classifying it as a hate crime, someone might diminish its’ larger implication that surely this was an individual act by Dylan Roof.”

Reports say the Department of Justice is leaning toward bringing hate crime charges against Roof instead of terrorism charges. But DOJ officials have not indicated when a final decision would be made.