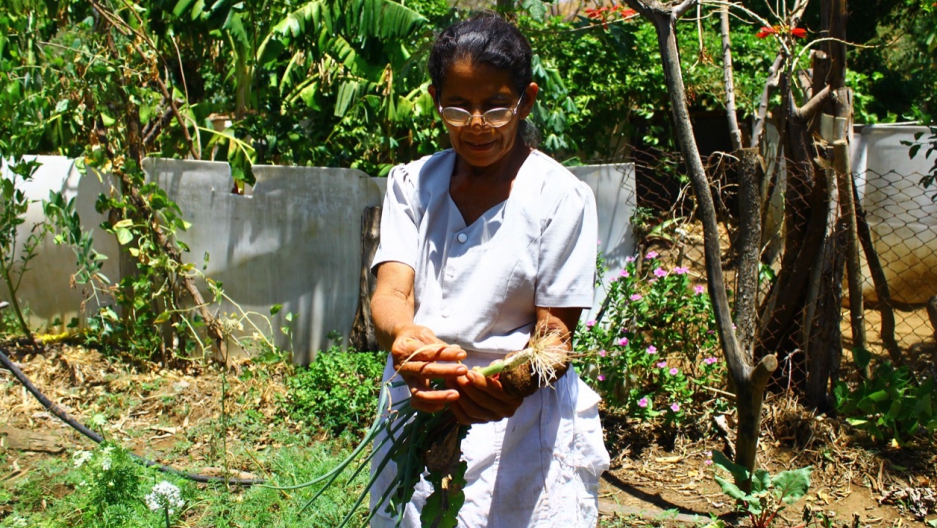 Instead of fried cheese, rice, beans, fried bananas, and soda made from powder — a typical first meal of the day for many Nicaraguans — he sipped a purple smoothie made of beets, carrots, milk and an egg.

Healthy eating is uncommon in Nicaragua. The normal diet is heavy with starches, sugar, and salt. Processed foods are ubiquitous. Deep-frying is a favorite way to cook.

Eighty percent of Nicaraguan children are malnourished, said Candelaria Zambrana, who helps run an advocacy group called the Center for Social Studies and Promotion. According to a 2012 study by the United Nations, more than 20 percent of the total population lacks adequate nutrition. Rates of diabetes and kidney disease — which can be caused by drinking water polluted with pesticides — are high.

Over the last couple of years, some rural families have sought to break out of this pattern by starting small organic farms. They use natural fertilizer and avoid chemical pesticides. The vegetables in Hernandez’s smoothie were all produced this way, in a garden behind his two-room home.

“Soaking a tomato in chemicals is not the same thing as producing it naturally,” he said. “This way is much healthier.”

The idea of sustainable agriculture first began spreading in northwestern Nicaragua about 20 years ago. It was in part a reaction against the heavy use of chemical pesticides in large cotton farms, which until recently dominated this region’s economy.

A few miles from La Trinidad, in the village of Copaltepe, the extended Rocha family, made up of about 20 people living in a shabby home, is pioneering the new approach to farming. For years, the Rochas used agro-chemicals and fertilizers. They grew cash crops, like corn and wheat, and bought vegetables and other foodstuffs in local markets.

Today they grow their own tomatoes, cucumbers, eggplants, radishes, bananas, carrots, and beets. They use compost, and although they still use pesticides, they have cut back significantly.

“What we used to buy at the market, we now produce ourselves.”

“What we used to buy at the market, we now produce ourselves,” said Daniel Rocha, who helps run the farm. “We save money, and we eat things we didn’t eat before.”

In 2009, the Nicaraguan government issued new policy guidelines aimed at promoting organic farming and better nutrition. It’s produced a series of instructional videos showing farmers how to make bio-fertilizers, recycle farm waste, reduce the use of pesticides, and rotate crops. This year it opened a seed bank that farmers can use to plant local crops, rather than others from different climatic zones.

“The government has always been very involved in food security matters,” Medina said. “But it doesn’t have the institutional stability or financial resources to provide good agricultural services to every small farmer.”

Small private organizations are trying to fill the gap. They distribute seeds, tools, and bio-fertilizers, promote family gardening, and offer classes in techniques of composting and sustainable farming.

“We also promote diet diversification,” said Ricardo Cruz, coordinator of a group called SosteNica that has an office in La Trinidad. “We have introduced non-traditional crops like carrots, eggplant, and beets that people thought were difficult to grow in such a dry climate.”

The reason organic farming is so slow to take hold in Nicaragua goes beyond the lack of funding and public education. Cultural tradition has a powerful hold on farmers here. It shapes what they grow, how they grow it, and what they like to eat.

“I have no faith in organic agriculture.”

“I have no faith in organic agriculture,” said a 71-year-old farmer in La Trinidad. “From what I see, there are no immediate results on productivity.”

Instead of spending three months preparing natural compost, farmers prefer buying chemical pesticides. Many mothers use processed corn flour to make tortillas because it is easier and faster that grinding their own corn. While Mr. Hernandez has converted to organic smoothies, local children who show up at his wife Doris’ makeshift store never ask for one.  They clamor for sugary pastries, ice cream, salted chips, and sodas made from Tang or other processed powders.

“Kids love those things,” Doris said with a smile. “I once told two boys that my beet smoothies taste good and give you energy. They tried one, but never came asking for it again.”