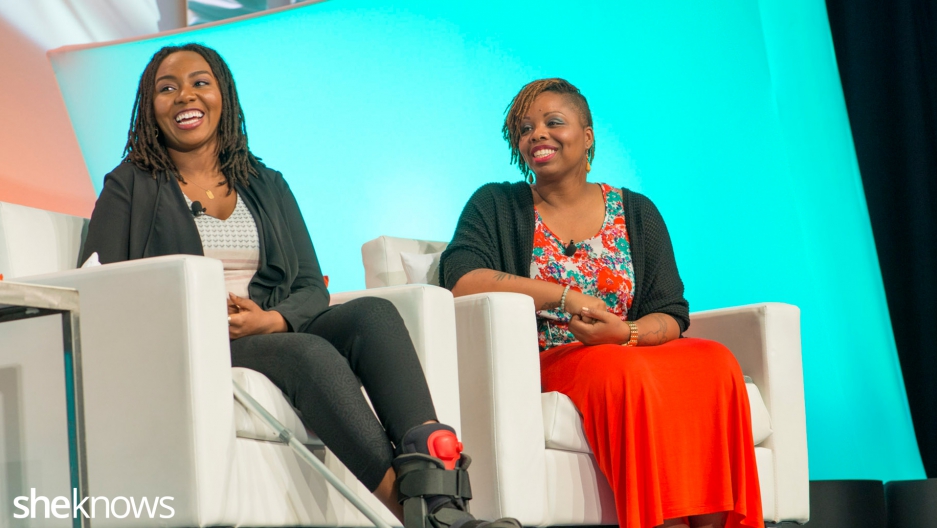 The death of a young black woman in a Texas jail has sparked a new wave of outrage on social media. On July 10, civil rights activist Sandra Bland was on her way to start a new job and life when she was arrested in Prairie View, Texas for a traffic violation. She had failed to signal when she changed lanes. Three days later, she was dead in her cell at Waller County Jail.

Police maintain that she resisted arrest and that her death was suicide; that she hanged herself. Her family strongly disputes that. And so do activists, including the founders of #BlackLivesMatter. The hashtag and site were created in the aftermath of the 2013 acquittal of George Zimmerman for the shooting death of Trayvon Martin in Florida; as a slogan, it's galvanized an international movement.

Patrisse Cullors and Opal Tometi co-founded Black Lives Matter along with Alicia Garza. Cullors and Tometi sat down with me in New York at the BlogHer15 conference for women in social media, to share their views on Sandra Bland, how women are often the victims of alleged police brutality, and why social media has transformed the civil rights leadership.

Here are some excerpts from our conversation. Click the audio above to hear the whole thing.

Cullors: Sandra Bland is probably one of the most tragic stories I’ve heard so far because she was stopped at a routine traffic stop. Next thing we know, she was incarcerated. Next thing we know, she had supposedly hung herself. And so the tragedy of her story is just so painful, and it’s this important marker for the reasons why we’ve built out Black Lives Matter.

Cullors: I think it’s important to talk about [the fact that] we’ve always uplifted black women in our segments, from Renisha McBride to Rekia Boyd to the seven-year-old Aiyana Stanley-Jones, who was killed by Detroit police in a botched raid. The Black Lives Matter movement has always lifted up these stories, and it’s just starting now that the media’s catching up with that....

Right now, the tragedy and the crisis within this country, and I argue the globe, is with black lives. If we don’t actually deal with the roots of white supremacy and racism, in which black people become the face for all of the atrocities here in this country and the globe, then we’re not going to deal with the issues of humanity.

Cullers: I know we’ve hit a moment…because you’re seeing the attack on black lives even greater. The murder in Charleston of nine black folks has everything to do with this current movement. It was a reactionary response to what a lot of white supremacist groups see as a “race war.” I think it’s pathetic that is the lens in which people are seeing Black Lives Matter — when in reality, we’re actually asking to be able to live our lives with dignity, to live our lives without fear.

Tometi: I work with a lot of mothers who don’t have their immigration documents…. A lot of these women are living their lives in the shadows. For our movement, in some ways, it’s really to shine a light on some of the issues that poor, working-class, black women are experiencing.

Cullers: Rosa Parks was not just a woman who sat at the front of the bus. She was a strategist; she was a tactician. I think what we are trying to push, because we have social media and they didn’t, is a new narrative. And we get to do that in this generation.