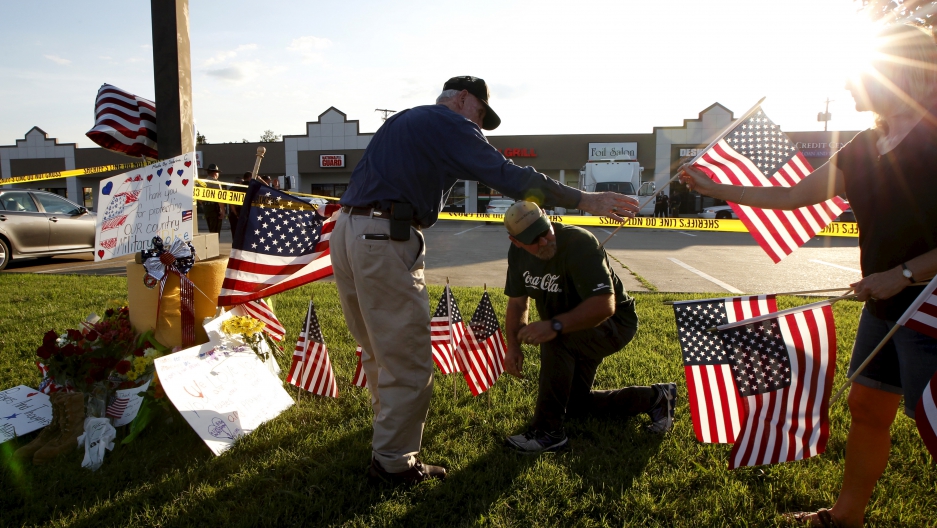 Mourners places flags at a growing memorial in front of the Armed Forces Career Center in Chattanooga, Tennessee on July 16, 2015. Four Marines were killed on Thursday by a gunman who opened fire at two military offices in Chattanooga, Tennessee, before being fatally shot himself in an attack officials called a brazen, brutal act of domestic terrorism.

Pray for the victims and their loved ones.

That was the first thought Omid Safi says went through his head when he saw news about the deadly shooting attack in Chattanooga on Thursday.

Then came a familiar sinking feeling.

“Not because the suspect is Muslim,” says Safi, who directs the Islamic Studies Center at Duke University. “When there is an act like this, it tends to undo all of the good work that has taken place in the community over the last years and months, and in particular in the month of Ramadan.”

The Islamic holy month that is just coming to an end wraps up a time when Muslims go out of their way to perform acts of faith, charity and social good.

“It’s almost as if the acts of one person, in the eyes of the greater society, ends up undoing these invisible acts of good,” Safi says.

Does that make Safi angry?

Not really, he says. “There is grief. There is genuine sadness,” he says.

“The sinking feeling is more just a sense of deep sorrow for a world in which acts of hideousness and violence become more prominent than acts of goodness and charity,” Safi says.

The scholar’s instincts during trying times such as these lead him to the teachings of Martin Luther King Jr. and the Jewish theologian Abraham Joshua Heschel.

“Heschel, in particular, has a wonderful saying where he says, ‘Few are guilty, [but] all are responsible,’” Safi says.

Applied to the Chattanooga episode of this week, Safi says the guilty party here appears to be the shooter and the shooter alone — not Muslims or Jordanians or Arab Americans as a group. But Heschel’s logic would implicate the rest of us as being responsible, Safi says.

“I take that same approach when it comes to the Charleston shooting or police brutality. We want to hold the individuals who are responsible for these horrific acts accountable, and then to step back and ask the question about how all of us … responsible?”

Mohammad Youssuf Abdulazeez, 24, is the alleged perpetrator of the shooting attack that killed four US Marines in Chattanooga. He was shot and killed police after he attacked a military recruitment center and naval reserve center.

Abdulazeez is reported to have written two blog posts in recent days that expressed his views about Islam. If he was indeed the author of the posts, Safi says they betray a hodgepodge understanding of Islam.

“You get a sense of someone who has a zealous ‘born-again’ type of understanding, without necessarily the maturity, the depth, the mentorship that comes with serious religious instruction,” Safi says.

The post, for example, referencing the story about three blind men describing an elephant to each other has roots in the Buddhist, Hindu and mystical Islamic Sufi traditions. If it turns out that Abdulazeez was inspired by an extremist group like ISIS, Safi says his radical fellow travelers would probably find his choice of religious texts somewhat ironic.

On Friday afternoon, US officials said Abdulazeez’s motives were unclear and that the suspect had no known links to international terrorism.