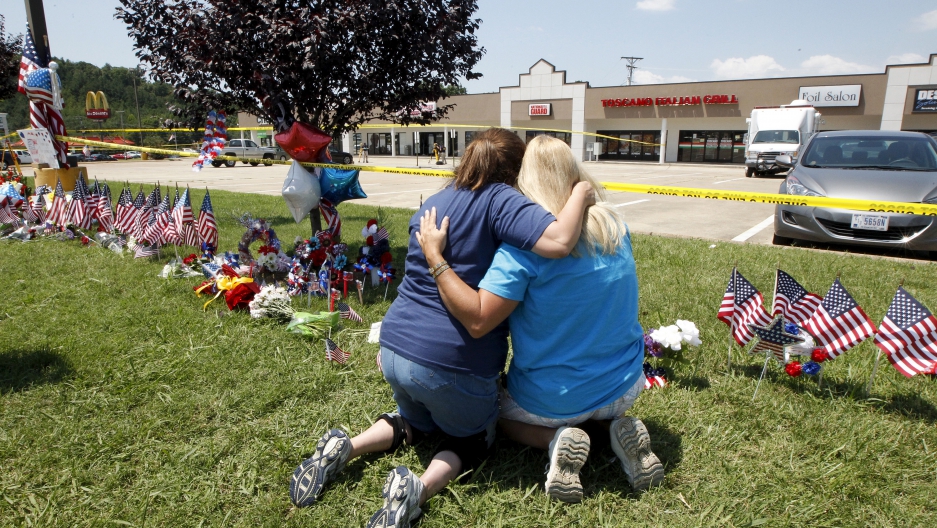 Betty Maynard (L) hugs her friend Cindy Atterton beside a growing memorial at the Armed Forces Career Center in Chattanooga, Tennessee July 17, 2015. Four U.S. Marines were killed on Thursday by a suspected gunman the FBI has confirmed as Mohammod Youssuf Abdulazeez, who opened fire at two military offices in Chattanooga before being fatally shot by police.

Mark Potok couldn't help noticing how quickly the massacre in Chattanooga was labelled "terrorism." That wasn't the case in Charleston where the shooter was white and the victims were black. Potok studies and tracks extremist groups for the Southern Poverty Law Center in Montgomery, Alabama.

"To me the difference is almost impossible to understand," he says.

"I think the attack in Charleston was, without any question at all, terrorism. By virtually any definition. It was a public act. It was meant not merely to kill the immediate victims but to send a similar message to all similarly situated people, meaning black people in America and in South Carolina in particular and also to make a kind of public declaration of the beginning of a 'race war.' If that's not terrorism, I don't know what is."

He's pretty sure Chattanooga is terrorism, too. "But the truth is we know less about this case than what happened in Charleston," he says. "Because there we have substantial evidence as to the motive of the shooter and that's not true in this shooting."

Potok has thought a lot about the labels we use to describe extreme violence. And he's come to the conclusion they are inherently political. "There is a reluctance to call people who are typically white or sort of all-American looking 'terrorist,'" he says. He thought that would change after the 1995 Oklahoma City bombing by Timothy McVeigh, but it hasn't.

"I think most Americans think of Islamist terrorism as something that doesn't organically come from us, from inside our own country, although of course there are domestic jihadists," he says. "For many on the political right, if a terrorist looks too much like an All-American boy or girl, the tendency is to say that person is merely mentally ill."

"This country has a fairly major movement on the radical right. It's pretty substantial. It's been growing in recent years, especially since [President} Obama took office, and it's very dangerous. I don't mean to minimize the threat of Islamist terrorism; one need only think of 9/11 to understand that. But the other is real as well."