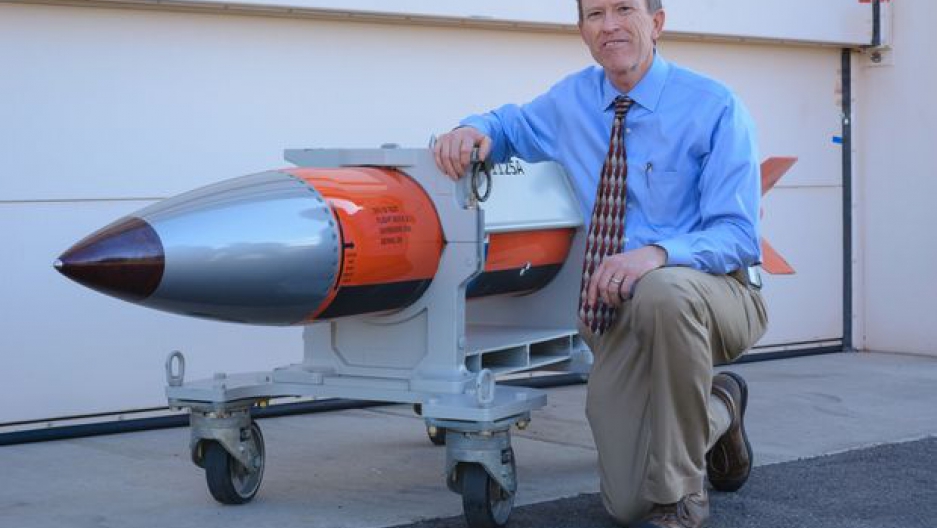 Phil Hoover, an engineer at Sandia National Laboratories, shows off a flight test body for a B61-12 nuclear weapon.

While the historic nuclear deal with Iran significantly limits the country's capacity to build a nuclear weapon, the United States might be secretly building up its own arsenal.

Secretly, because the US has publicly vowed to not produce new nuclear weapons in the aftermath of the Cold War — a promise that President Obama has said he would keep. Shortly after President Obama’s inauguration in 2009, Obama told a crowd in Prague, “Today, I state clearly and with conviction America’s commitment to seek the peace and security of a world without nuclear weapons.” He won the Nobel Peace Prize six months after this speech, in part for his commitment to reducing America’s nuclear capabilities.

Rather than produce new weapons, the US is supposed to be maintaining its current arsenal. But at two nuclear weapons laboratories in New Mexico, Sandia National Laboratories and Los Alamos Labs, an investigation finds that the US has been doing much more than simple maintenance.

Len Ackland, a contributor to the Reveal, a Center for Investigative Reporting podcast, who helped lead the investigation, explains: “The mission of the weapons labs, in particular Sandia, which is the engineering arm of the US nuclear complex, is to ensure the reliability of the bombs and the arsenal. That is being done, but instead of simply testing the parts, this new bomb is being developed.”

This new bomb is the B61-12. Despite claims from the Obama administration and the Pentagon that the bomb is simply an upgrade, it is the first radar-guided, rather than free-falling, nuclear bomb to enter the US arsenal.

The current plan is for the B61-12 to go into full production in 2020, eventually producing 400 of them. It’s part of a $350 billion plan that the US has to “modernize” its nuclear weapons over the next 10 years.

The B61-12 is particularly controversial due to its radar capabilities and the variable yield technology, which Ackland says could change the way nuclear weapons are used.

“The problem with this is that if the weapon, by being both more accurate and of lower force, is seen by the military as being a useful target, it increases the possibility that the military in fact might recommend [its use] to the president,” Ackland says.

The nuclear threshold has, of course, only been crossed twice: in August 1945, when the US dropped atomic bombs on Hiroshima and Nagasaki. The shift in new nuclear technology, Ackland believes, might eventually lead to crossing that threshold once again.

“I don’t believe [Obama would use the weapon]," Ackland says. "But what’s going to happen in the future? What other technical developments are going to come along? Who’s going to be elected? Who’s going to sit in the president’s office?”