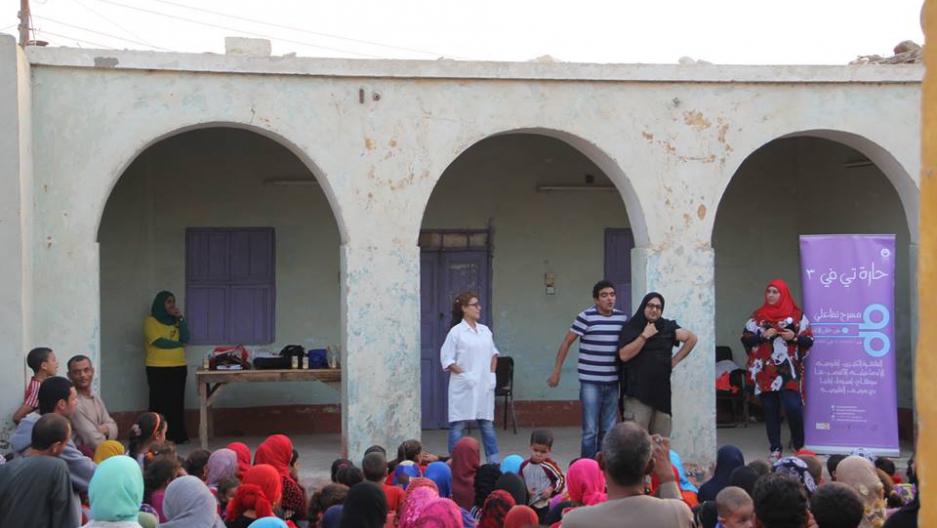 CAIRO, Egypt — In a small hall in central Cairo, a group of women are gathered around talking about sex.

All of them have undergone female genital mutilation (FGM), a procedure that usually causes the victim to take little if any pleasure in sexual intercourse. And many report a familiar problem in the bedroom: “borouda” — a word that translates to the English “frigidity” in bed.

“So, what’s the solution to frigidity?” asks one woman. “Pretend,” says one voice. Another adds: “What’s gone is gone.”

The gathering, part of an NGO-led project to educate Egyptians on the adverse effects of FGM, was organized by the Noon Theater Troupe in partnership with the UN Population Fund. The group organizes performances in areas where the practice is common.

“It makes women bored in intimate relationships,” says Hamdeya Ahmed, from Assiut in Upper Egypt, a mother of three, two boys and a girl. She had the procedure done to her, but spared her daughters.

“I hate it. It hurts. I hate it,” says another woman in the room, talking about sexual relations with her husband.

Most efforts to address the problem of FGM focus on stopping it being carried out on the next generation. But over 90 per cent of married women in Egypt have been cut. Nada Sabet, the group’s artistic director, says that one of the issues is that most women who have had FGM do not enjoy intimate relations with their spouses.

“They didn’t have any sexual contact before circumcision [the procedure is performed on girls as young as eight] so there’s nothing to compare it to, so this idea that things could or should be pleasurable doesn’t exist,” she says.

Some women who have undergone FGM report that they feel a lot of pain during intercourse. Some don’t feel pain but simply find it boring or mildly unpleasant.

Sabet’s group puts on plays on the subject of FGM. In one scene, a husband comes home from work and attempts to romance his wife and take her to the bedroom, saying, “Come on, darling, I’m your lawful husband, there’s no shame.” To which she replies, “but we already have two children.” The implication: why do we have to keep doing this?

There are other ways

One of the things Sabet talks to the women about is ways for FGM survivors to enjoy sex. “We talk about the idea of sexual pleasure and everyone shares,” she says, and the fact that “there are other ways of stimulating pleasure in the female body.”

A 2007 study in the Journal of Sexual Medicine suggests that in many women who have been cut, some of the fundamental structures needed for orgasm remain intact and that most women in the study reported being able to achieve orgasm as well as arousal and sexual satisfaction.

Sometimes this involves talking to their partners about what works, and what doesn’t.

One woman recounts a story about how, after talking to the staff at an anti-FGM organization, she explained to her husband how she felt and why she doesn’t enjoy sex. “Now there’s more understanding, there’s exchange about it, we communicate more.”

More from GlobalPost: It's FGM season in Egypt

The same was true for a woman from Giza, who spoke to GlobalPost on condition that she wouldn't be named.

“Because I’ve had FGM [sex] is only pleasurable for me in certain ways and my husband knows that. But not all men care about that. Many only care about what feels good for them and say, oh, she can’t feel it, it doesn’t matter,” she says.

In Egypt there is insufficient sex education among men and women. Young men will often say they want to be with a circumcised woman not really understanding what that means.

“I didn’t know what it was before,” says Ahmed Said, 24, before he began attending awareness-raising sessions at a local NGO in a village in Upper Egypt. He says that families sometimes stipulate that FGM is a condition for a prospective bride “to preserve the ‘decency’ of the woman.”

“In our society with our traditions we can’t talk about this subject. Men often don’t know much about it,” says Mohamed Fathy, a 25-year-old law student.

Ahmed says he is now against the practice “because it can create a lot of complications and difficulties in the marriage.”

One of the difficulties NGOs face when raising awareness is not wanting to stigmatize women who have undergone the procedure as people of both genders learn more about the complications.

Dr. Abdelhamid Attia is a Cairo-based gynecologist and became an advocate for FGM eradication 15 years ago. But prior to learning about it, he said that for years it did not occur to him to question it, though he would see its negative effects in his practice.

A drawing by a middle school child entitled 'A child's fear of FGM.' The little girl hides under the table saying, 'no, Mum, please,' while her mother calls to her as the doctor and nurse arrive. #Assiut #Egypt

“It was a custom that went on for thousands of years,” he said, “we took it for granted…and FGM was not taught in Egyptian medical schools.” He said it’s still not taught as part of the main curriculum.

Occasionally his patients ask about how they might have easier intimate relationships despite FGM.

“People in Egypt consider sex a taboo, they don’t go to doctors to solve their sexual problems,” he says. “But when you have very good relationships with your patients…and you gain their trust they start to speak to me about their sexual problems. I explain to them that there is a difficulty with the woman who has been cut, and this may decrease her pleasure and for the man you have to do a more active role to satisfy them. But this is the minority.”

Though FGM has been illegal since 2008, the first conviction came only earlier this year. Many of those who are supposed to enforce the law also have insufficient information about the issue. Dr. Attia is part of an initiative to sensitize prosecutors and judges about FGM. Here too, he says, the issue of pleasure comes up.

“These workshops showed me that many young men and even grown up men do not have enough knowledge about sexual life and about the needs of the woman and how to satisfy the woman.” He says that many say they learn more than just the legal side of FGM from his lectures.

“When we finish the workshop many of them say to us: 'you have taught us many things we didn't know about what is the role of the clitoris, how to satisfy the woman.'”

One of the problems, gender rights advocates say, is that the state eradication campaign hardly mentions sex.

“The elephant in the room is talking about sex,” says Dalia Abdelhameed, gender researcher for the Egyptian Institute for Personal Rights.

It focuses instead on the fact that the practice is not a religious duty and its potentially medical consequences.

She adds that it also helps the cause of eradication: “It makes people more adamant about stopping it because they have worked on their own lives and have experienced other ways of being and find out it’s a lot more fun.”