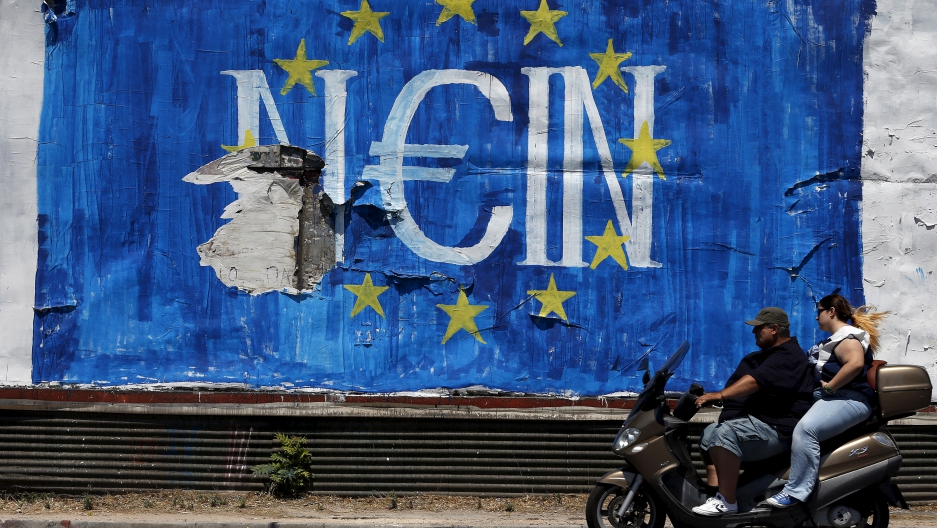 People ride past graffiti in Athens, Greece July 12, 2015. Euro zone leaders will fight to the finish to keep near-bankrupt Greece in the euro zone on Sunday after the European Union's chairman cancelled a planned summit of all 28 EU leaders that would have been needed in case of a "Grexit".

After the Greeks said no to the referendum, Prime Minister Aléxis Tsípras had to go against the will of the people.

Tsípras decided to accept financial aid despite his first statement saying that the EU-IMF bailout terms were unacceptable. Mark Lowen, the BBC correspondent in Athens, says Tsípras didn’t have much of a choice.

“Under extreme pressure from the eurozone, the ‘no’ became a ‘yes’ and Aléxis Tsípras and his government ratified this bailout agreement,” Lowen says.

Naturally, the Greek people felt betrayed by their government, but Lowen says they realize that the Greek government had a gun held to its head.

“But that won’t lessen the frustration here. [The Greeks] felt that they were going to get something new with this government and with the ‘no’ in that referendum. But actually they’ve had more of the same and yet more austerity measures,” Lowen says.

Tsípras is now in a very rare position as he admits that he doesn’t believe in the bailout option. Lowen says many changes will probably be made in the Greek government in order to have more bailout-friendly members of Parliament.

But, in spite of the controversial decision, Tsípras is still very popular in Greece.

“When you look at the opinion polls here, the majority of Greeks still wants him to stay as prime minister. He’s still the most popular politician in this country, because Greeks feel that he actually fought for them, unlike previous prime ministers here,” Lowen says.

After phases of revolts and depression, Greece has now entered a phase of fear. Especially fear of unemployment. Lowen talked to a local pharmacist who explained that she might lose her job because of the new policies.

They're going to bring in big pharmacy chains to reduce costs, but the pharmacist told Lowen she was afraid it would put her out of business.