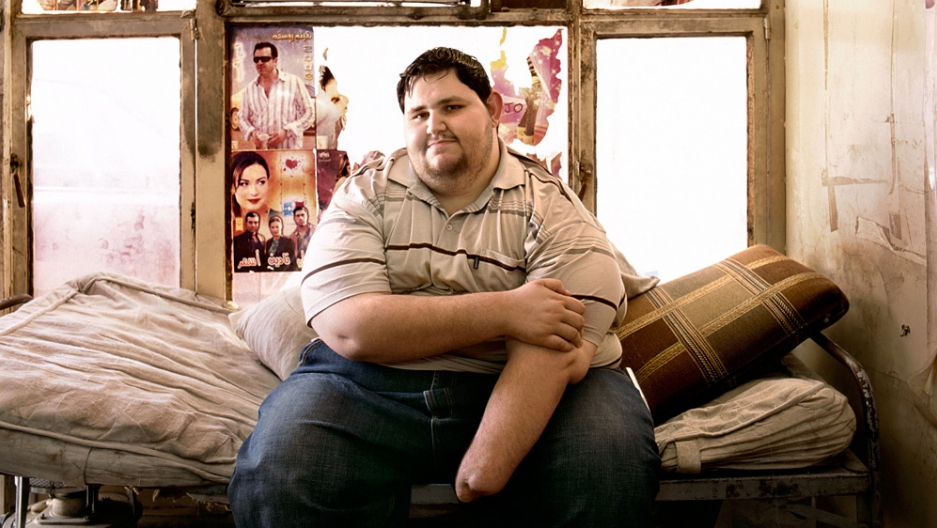 I first interviewed Khduer Hawakeen in the summer of 2011. Hawakeen was determined to lose 317 pounds, but, living in Baghdad, it seemed just a dream. Yet the way he said “Never give up” made me want to believe in him. I decided to keep following him.

That first time we met, Hawakeen was sitting on the middle of his bed like an iceberg, getting bigger and bigger as I lowered my eyes. He had a shy look and with his right hand he hung on to his left elbow, until he felt more at ease. He was living in a shelter on the driveway as he no longer could get up the stairs. Pictures of handsome, yearning Arab singers hung on the walls. Hawakeen was a Christian, a minority which is leaving Iraq en masse. His father passed away when Hawakeen was just 15, and he had been taking care of his mother and younger brother since. But he probably had started eating because in that same year, he helped a group of journalists from a burning building following a suicide attack.

He underwent stomach surgery two days later. I hoped the operation would be successful, but this was Baghdad. Violence from the past decade and the prior international sanctions against Iraq had not exactly encouraged doctors or hospitals to update their medical knowledge. People die in Iraq for the silliest reasons.

Yet it was 2011 and people were optimistic. Just around the corner from where Hawakeen lived, a young Kurd was opening the first shopping mall in Baghdad. A little further away in the shopping street Kerada, a young Shia was opening up one gym after another — guys were eager, after years of sitting indoors, to go out again. And across the river in Zawra Park, a young Sunni girl I met was working seven days a week at the big entertainment park that was again filling up with people. The US Army would pull out at the end of that year and people hoped that terrorists would no longer have a reason to attack.

It didn’t work out that way. A sectarian leader was left in charge and corruption became rampant as each political block formed its own militias. “Perhaps that’s necessary to survive as a politician in this country,” said Ad Melkert, the head of the UN mission in Iraq, UNAMI, at that time.

Although Maliki had won the elections in much the same way George W. Bush won his, Melkert insisted the Iraqi people had chosen him. Just two years later, Iraq spiraled back into violence. ISIS took control over large parts of the country, supported by the people in the areas they conquered who preferred anyone over Maliki. They quickly changed their minds. Since January 2014, another 3 million Iraqis fled.

Try staying positive under so much turmoil. Try staying on track — because, how else will you be able to lose more than half of your body weight? Yet Hawakeen persisted. He did even more than that: He won a girl’s heart and started his own business providing Internet to people in his area. He still goes to the gym every morning. Last time we talked he weighed 253 pounds. The end goal is 220 pounds. I admire his persistence. He taught me a very important lesson: If you want to follow your dreams, let no outside circumstances get in your way.