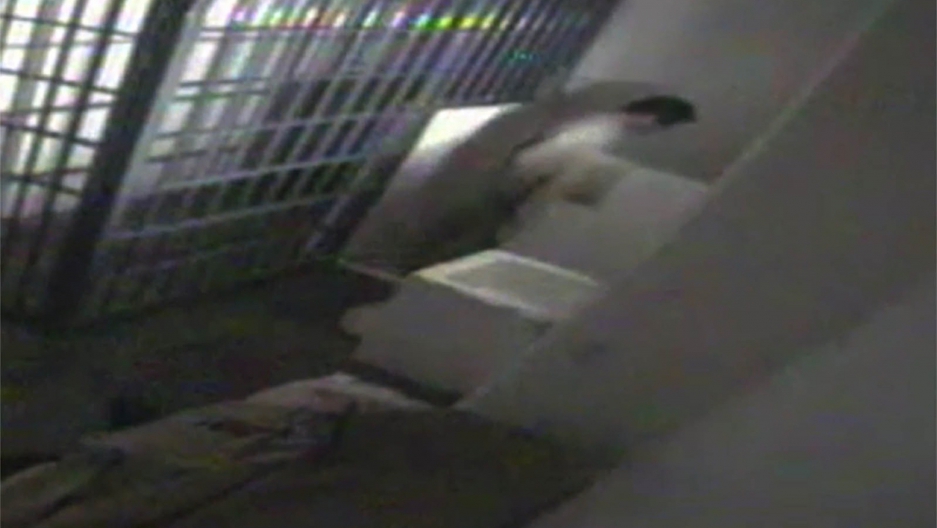 A still from the grainy CCTV video of Joaquin "El Chapo" Guzman during his escape.
Share

MEXICO CITY — One second, infamous Mexican drug trafficker Joaquin “El Chapo” Guzman is in a maximum security prison cell, pacing around the bed. The next, he’s vanishing like a magician in a disappearing act.

A video of the Houdini trick, taken from a CCTV camera in the cell, was released by Mexican officials last night. It’s rapidly becoming an internet hit.

Some media have put dramatic music to it; others step-by-step commentary.

Guzman, head of the Sinaloa cartel, made his jailbreak Saturday night, fleeing through a hole in the shower, which the camera didn’t catch. (Mexican security officials told reporters they thought it would violate his rights to film the prisoner’s private parts so they had left the blind spot.)

The drug lord then entered a mile-long tunnel, which was equipped with electric lights and an air vent. He’s believed to have zoomed through it on a motorcycle. He exited at a construction site in a residential neighborhood, with mountains of earth that his cohorts had dug out from under the prison.

The grainy video makes for good internet: an eyeful before one of the most spectacular jailbreaks in history. But it also adds to the suspicion that Guzman’s “escape” had help from officials.

Pundits asked how his cohorts managed to break through to the cell without making a racket that alerted authorities. And how did they succeed in building the tunnel to the exact point where Guzman needed it?

It also took guards half an hour to raise the alarm that Guzman had disappeared.

“There was obviously complicity from officials because you can’t accomplish the task of building a mile-long tunnel that led right into where Chapo Guzman would be in the prison without official support, either from prison guards or officials on the outside,” says Mike Vigil, the former head of international operations for the US Drug Enforcement Administration. “Additionally, they either got their hands on the floor plans, and likely a global positioning system on the inside to get the exact position where Chapo would be.”

Mexican federal prosecutors have been questioning more than 30 guards and other prison officials over the escape, although they have to yet charge any of them.

Guzman also escaped a Mexican prison in 2001 and went on a 13-year trafficking rampage before Mexican marines caught him in February 2014. The latest jailbreak has embarrassed President Enrique Peña Nieto and angered US drug agents.

The CCTV clip isn’t the only image making the rounds.

A blog specializing on drug trafficking released photos alleged to be Guzman sitting in a plane. Nobody has been able to verify if it’s really the kingpin or when these pics were taken.

True or not, those images are only helping build up Guzman’s reputation as outlaw that has reached legendary status in the underworld here and beyond.