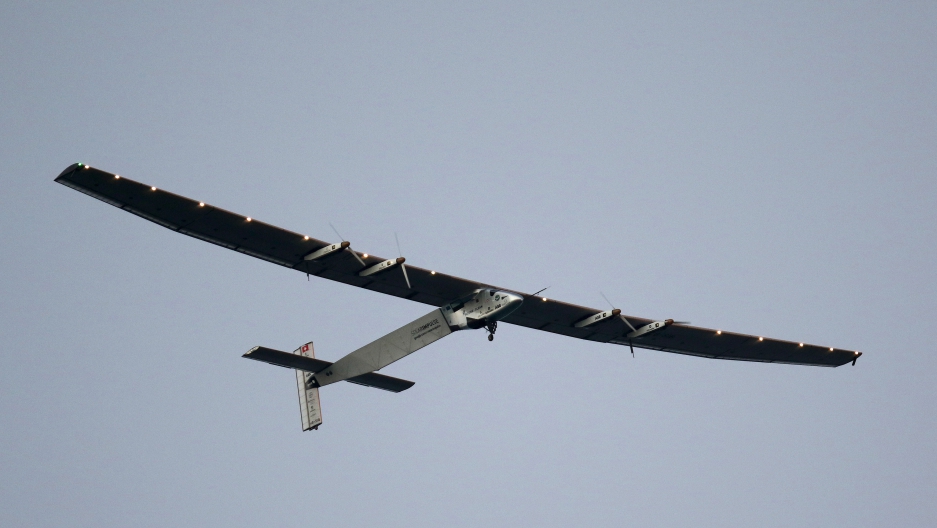 Swiss pilot André Borschberg already broke the record for longest solo flight in a fuelless vehicle when he landed Solar Impulse 2 in Hawaii earlier this month.

Most people would relish the opportunity to take eight months off in Hawaii, but for the team behind Solar Impulse 2, it’s pretty disappointing.

Just two weeks after completing a record-breaking flight across the Pacific Ocean, the solar-powered plane has been grounded until at least spring. Because of battery damage sustained during the latest leg of the journey, the solar plane will stay in Hawaii’s Kalaeloa Airport for repairs.

Swiss pilot André Borschberg finished a grueling five-day flight from Japan to Hawaii’s Kalaeloa airport earlier this month. Another pilot, Betrand Piccard, was scheduled to fly the plane from Hawaii to Phoenix, Arizona.

“We are disappointed, but not depressed,” Bertrand told CNN Wednesday.

The plane is about halfway through its entirely solar-powered round-the-world trip. And while the delay is frustrating, the team behind Solar Impulse 2 has already shattered the record for the longest solo flight in an fuelless vehicle by two full days. They hope the flight will inspire other aviation innovation when it is completed.

However, during the latest leg, the lithium-ion battery system was over-insulated, and as a result overheated beyond repair. The entire system will have to be replaced.

This definitely isn’t the first delay this journey has seen. Back in May, Borschberg was forced to reroute to Japan because of a cold front after less than two days in the air. After landing, one of the wings was damaged in a storm. foul weather delayed their departure from Japan again, even after the wing was repaired.

.@solarimpulse's Round-The-World will continue in 2016. We will never give up! pic.twitter.com/bRr6ZXcZIN

Replacing the battery will only take a few months, but a change in the seasons will make the journey impossible by them. Days in the Northern Hemisphere are already getting shorter, and by the time the plane is fixed there won’t be enough sunlight to power the plane.

“While Solar Impulse has completed eight legs, covering nearly half of the journey, setbacks are part of the challenges of a project which is pushing technological boundaries to the limits,” reads a post from the project’s blog. “Solar Impulse will try to complete the first ever round-the-world solar flight in 2016 and this delay will in no way influence the overall objectives of this pioneering endeavor.”