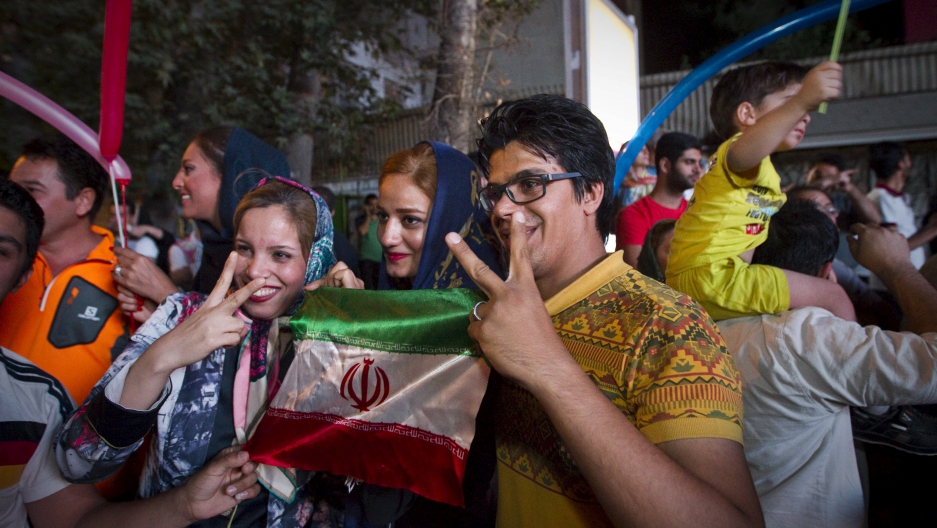 Iranians gesture as they celebrate in the streets of Tehran following the nuclear deal announced on July 14. Iranian president Hassan Rouhani said a nuclear deal with major powers would open a new chapter of cooperation with the outside world after years of sanctions.

Saman Arbabi, an Iranian American satirist, is tired of all the hype and navel-gazing over the nuclear agreement with Iran.

"All this is really is just a big business deal. That's all it is," he says. Arbabi was a mainstream journalist for several years, but chucked it all to make fun of the news, full time.

@SamanArbabi GreatPoint! @aarondmiller2 on #IranDeal "This is Not a historic catastrophe nor a historic transformation,it's a BUSINESS DEAL"

His take on the nuclear deal: "All this means is that at the end of the day the Great Satan's money is good, even for an Islamic Republic government like Iran." Arbabi says the whole basis of the 1979 Iranian revolution was "Death to America" and "Death to the Great Satan." But the nuclear talks changed all that.

"At the end of it, we like the money and as long a Uncle Sam spends some money for some of our stuff and gives us some fun toys, it's OK. We just downgraded it from the 'Great Satan' to the 'little devil.'"

Iranians inside Iran know Arbabi well. He's produced several Persian-language satirical news programs with Voice of America. And he's a fan of the nuclear agreement. It's just that his analysis comes out in one-liners.

"At the end of the day, you want a BMW instead of a nuclear bomb and that's kind of what Obama did with his nuke policy." On a slightly more serious note, Arbabi believes the terms of the nuclear pact will enable the United States and Iran to finally get to know each other. "It's taken the United States to a place in the deep, darkest basements in Iran where we didn't know what the hell was going on. Now we do know what's going on and we can hold a leash around their neck and make sure they don't go crazy."

This is my #Tehran pic.twitter.com/y6aSpOht0d

I can imagine Iranians broke a #Ramadan #Hangover this morning.

His final word on the nuclear deal: "The way I would describe it is that this is a very weird marriage. It's like America's third wife after the Israelis and the Saudis. Iran is sort of like the weird wife in the family."