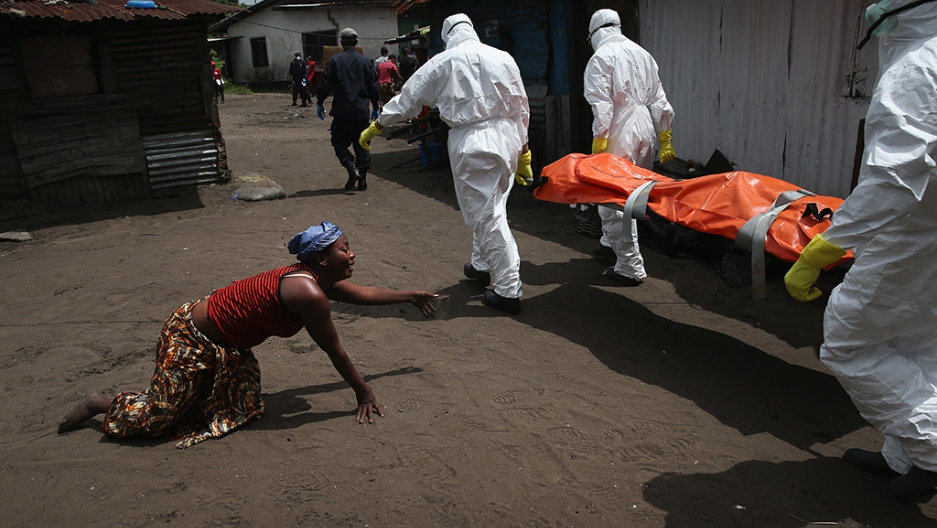 A woman crawls towards the body of her sister as Ebola burial team members take her sister Mekie Nagbe, 28, for cremation on October 10, 2014 in Monrovia, Liberia. Nagbe, a market vendor, collapsed and died outside her home earlier in the morning while leaving to walk to a treatment center, according to her relatives.
Credit: John Moore
Share

WASHINGTON — Even as donors pledged an additional $3.4 billion last week to those countries hit hardest by Ebola – Guinea, Sierra Leone and Liberia – those working closely on recovery remain cautious about how the international community is internalizing the lessons learned from the epidemic as it strives to preempt future health crises.

Humanitarian workers, advocates, and other experts in global health welcome the additional funding, but fear that the focus on Ebola could take away from existing work on other diseases and that without stronger donor accountability, the funds might not have their intended impact.

“It is encouraging to see additional resources being devoted to the Ebola outbreak and there is clearly still work to be done here,” said Erin Morton, director of Global Health Technologies Coalition, a group of more than 25 nonprofit organizations working on health research and development. But the group has urged the United States not to support Ebola efforts at the expense of research programs for other neglected diseases.

“We have a lot of lessons from Ebola that have been identified. I’m not sure that they’ve actually been learned,” said Ron Waldman, a physician who was in was in the trenches last year leading the Ebola response team for the humanitarian organization, Save the Children.

“The problem is much more complex than a one-to-one relationship between a cause and effect,” Waldman said. “And fixing it so it doesn’t happen again is going to require a very broad range of repair.”

Concerns about recovery and infectious disease preparedness were substantiated by a report released just days before the donor conference, in which the World Health Organization conceded that the Ebola crisis “exposed organizational failings” – and that the WHO still does not have the capacity to fully respond to a future medical emergency.

The new funding for Ebola recovery in West Africa was made at an international donor conference held last week in New York by United Nations Secretary-General Ban Ki-moon. Donors including the governments of the United States and European Union and the World Bank vowed their support to strengthen health systems across-the-board as well as to bolster education, infrastructure and economic development.

While this approach to Ebola recovery is a holistic one, those working in other areas of public health warn that the spotlight on Ebola could hamper efforts to address other global challenges.

“The real threat is that Ebola is taking away from other vaccine-preventable diseases,” said Richard Hatzfeld, a spokesman for the Sabin Vaccine Institute, an organization that develops and advocates for vaccines. “When you divert that attention it’s very difficult to get it back.”

Waldman, who traveled to Sierra Leone and Liberia in the height of the 2014 outbreak, saw this first-hand.

Malaria kills over one million people each year, and typically accounts for 40 percent of patients treated in Liberian hospitals and facilities. Last year Liberia, Sierra Leone, and Guinea saw an estimated 11,000 more deaths than average due to malaria, WHO reported in a press briefing last week.

The worst Ebola outbreak in history has resulted in 11,200 deaths in West Africa, and around 30 new infections are still being reported each week.

Last week’s $3.4 billion pledge exceeded expectations and brings the total amount committed to recovery to $5.18 billion - more than double the amount spent on malaria in 2014.

What remains to be seen is how effectively this funding will be put to use. There are concerns about how the disbursement of funds will be measured and tracked.

The ONE Campaign, an advocacy organization working to end preventable disease, recently released its own report calling for greater accountability from donors. ONE’s researchers found that inconsistent reporting by donors and the limitations of resource tracking mechanisms lead to an incomplete understanding of how Ebola donations are utilized. Keeping better track of resources, ONE wrote in the report, can save lives.

“If we don’t know what has really been pledged and delivered, no one can adequately match promised resources to the needs on the ground. That means gaps cannot be easily identified and we risk losing time, resources, and lives,” ONE’s Global Health Policy Director Erin Hohlfelder said in a statement.

There may not be one answer to what should come next in Ebola recovery and preparedness for a future outbreak, but there are leaders in the global health community who see progress.

“I do think we are better prepared,” said Dr. Edward Cox, director of the Office of Antimicrobial Products in the FDA’s Center for Drug Evaluation and Research.

Cox and other scientists are already thinking about how to bolster the US capacity to respond to the emerging threat of Middle East Respiratory Syndrome (MERS), which first emerged in Saudi Arabia in 2012 and to date has been recorded in 26 countries with 436 deaths – killing 30 to 40 percent of patients diagnosed with the disease, according to the CDC.

“Now we’re looking at MERS and trying to think about what do we need to be doing at this stage to be well-positioned,” said Cox. “We’re building a lot on what we learned and did for Ebola.”

“I think it’s important at this point that everyone keep a lot of pressure on. Because Ebola was very, very scary, but it could have been a lot worse and the next one could be a lot worse,” said Waldman, the physician for Save the Children.