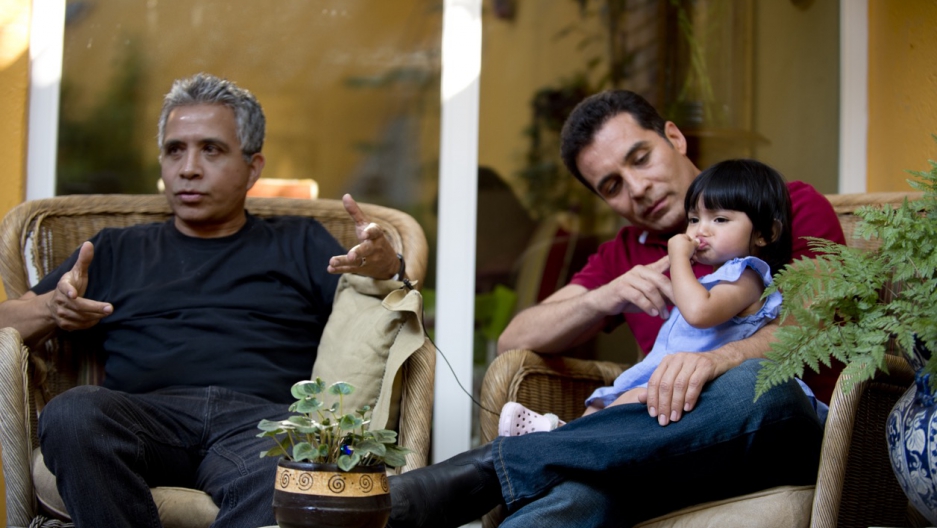 Jaime Morales and Felipe Najera in their Mexico City garden with their adopted daughter in April 2013.
Credit: Yuri Cortez
Share

MEXICO CITY — The Mexican capital’s churches have a new challenge: where to seat same-sex parents during their adopted child’s baptism.

Traditionally, the father sits on the right, the mother on the left. But since a law reform in 2009, various same-sex couples have brought their adopted children to be baptized.

“It creates confusion. So we normally seat them in the order of how they appear on the register,” says the Rev. Hugo Valdemar, spokesman for the archdiocese of Mexico City.

The Roman Catholic Church is against same-sex marriage and opposes adoption by gay and lesbian couples. But it will not refuse to baptize any children.

That baptism seating dilemma could soon be shared across this very big country.

Mexican Supreme Court Judge Margarita Luna announced on July 6 that she will present a motion to make it unconstitutional to deny adoption to same-sex couples.

This would make adoption laws already approved in the Mexican capital, a heartland of socially liberal reforms, effective throughout the country, including in much more conservative states.

In June, Mexico’s high court also ruled it unconstitutional to deny marriage to people of the same sex — shortly before the US Supreme Court did exactly the same thing.

Under a leftist city assembly, Mexico City became the first place in Latin America to legalize gay marriage with the 2009 reform. Adoptions by couples who married under this law have been taking place since 2010.

Still, nationwide, Mexico is not exactly the bastion of liberalism it may sound like. Eighty-two percent of Mexicans identify themselves as Catholic, according to the census. And more staunchly conservative parts of the country are pushing in quite a different direction from Coahuila and Mexico City.

Take the state of Campeche, the swampy setting of Graham Greene’s book on Mexican Catholicism, “The Power and the Glory.” There, lawmakers passed a 2013 law specifically banning gay adoption. (This could be overturned by the new ruling.)

Violence against gay people is also common in some areas. In June, a gay activist was stabbed to death in the north-central state of Queretaro, a murder that colleagues said was a homophobic attack.

What makes a family

Campaigners for the rights of lesbians and gays see marriage and adoption as key rights that naturally follow from each other.

“At its core you are asking what constitutes a family,” says Jessica Stern, executive director of the New York-based International Gay and Lesbian Human Rights Commission.

“There is more than one way to make a loving home. You have widows, siblings that cohabitate, step parents, divorced parents, and many others. You cannot say that someone who is not in a heterosexual unit will be any less of a dedicated or loving parent. That is totally irrational.”

In the United States, 38 states will now allow some form of adoption by same-sex couples, but there’s been no national ruling on the issue.

But in Mexico, while support for gay unions is growing, there’s more opposition to adoption.

A survey in 2013 here found that 52 percent of Mexican people supported marriage rights of gay and lesbian couples, but only 24 percent said those couples should be allowed to adopt children.

“We have to prioritize what causes more problems,” says Valdemar, the archdiocese spokesman. “Adoption by people of the same sex affects a child who has not chosen this. A child has a right to a mother and a father. Having two parents of the same sex could cause them psychological problems.”

Yet gay rights activists say the argument that adoptions by same-sex couples are unhealthy is based on prejudice, not fact.

A survey conducted last year in Australia looked at 500 children with same-sex parents and found they were as healthy, and in some cases doing better, than other children.

Stern, of the New York-based advocacy group, says attitudes are changing rapidly around the world. She sees growing acceptance of different families in the future.

“It is an exciting time of transformation,” Stern says. “And Mexico is a great country to look at in terms of the changing environment. It is at the vanguard.”