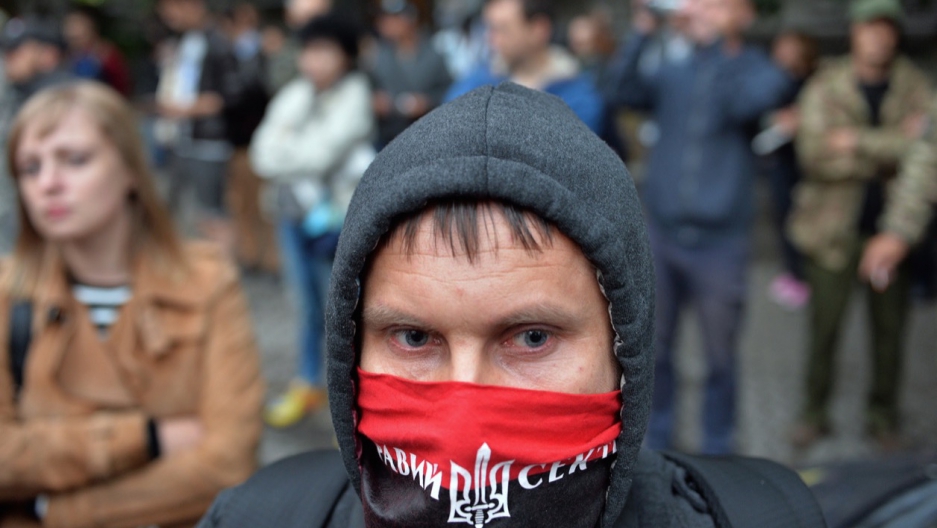 KYIV, Ukraine — A deadly weekend shootout between police and camouflaged gunmen might have seemed commonplace in eastern Ukraine, where security forces are battling Russian-backed insurgents.

Except for one thing: It took place on the other side of the country — only a short distance from the European Union’s border.

And this time, the militants were members of Right Sector, an ultranationalist paramilitary group that’s been fighting on the front lines for Ukraine.

The shootout happened Saturday outside a sports club in the far-flung western region of Zakarpattia and left at least two dead.

About a dozen gunmen fled to a nearby forest. By Monday evening, they were reportedly still hiding from security forces. Boys look on Monday as Ukrainian security forces comb the village of Bobrovyshche, near the small town of Mukacheve where a shootout occurred Saturday. The troops are trying to locate and arrest Right Sector fighters.

The incident has sparked renewed concerns that Ukraine — while dependent on armed volunteer forces like Right Sector to fight separatists in the east — is ill-prepared at keeping them under control outside the war zone.

“What happened in Zakarpattia was more reminiscent of Colombia than Europe,” journalist-turned-parliamentarian Serhiy Leshchenko wrote, referring to the South American country plagued by paramilitary violence.

Right Sector claims it was attacked by crooked cops and private guards serving a local politician involved in a lucrative cigarette-smuggling ring. It said was doing its patriotic duty by cracking down on the illicit business.

Others believe the two sides were actually vying for control over the racket, with another powerful politician backing Right Sector.

The above footage, posted to YouTube by Ukrainian lawmaker Mustafa Nayyem, is believed to be taken at Saturday's shootout, although GlobalPost could not independently verify its authenticity.

Observers say the assault represents a greater problem in post-revolution Ukraine, which is still struggling to root out corruption and strengthen its security services.

“The conflict in Mukachevo exposed all the weak points of the Ukrainian law enforcement system and the government in general, showing its inability to anticipate these kinds of developments as well as swiftly and authoritatively react to them,” read an investigative report in Ukrayinska Pravda, a leading news site.

A militant political group that grew out of last year’s street revolution, Right Sector has long made headlines in Ukraine.

Its formal political influence remains marginal. But its prowess in battle, controversial, nationalist beliefs, and disproportionate coverage in Russian state media have earned the group infamy.

Kyiv has relied on an array of paramilitary outfits, some of them tainted by fringe ideologies and accusations of abuse behind the lines.

The government has incorporated most of those battalions into the Interior and Defense Ministries. But Right Sector has remained largely outside the formal command structure and has been vocally critical of the authorities.

Some supporters say these volunteer combatants, who’ve fought in most major battles, have earned a bad rap over a few bad apples.

Semen Semenchenko, a prominent parliamentarian and commander of the Donbass Battalion, another key volunteer force, warned against jumping to conclusions over the shootout. He says that while Right Sector fighters may have been responsible, corrupt officials in various local agencies were also likely involved.

“The guilty need to answer for this, but it’s unnecessary to turn this into a campaign … against volunteers,” Semenchenko said on Ukrainian television Sunday.

There are signs the authorities might be getting that message.

On Monday, Prime Minister Arseniy Yatsenyuk ordered the dismissal of all regional customs officials in Zakarpattia, pending a full investigation.

Later, President Petro Poroshenko blamed both sides of the conflict and also pointed to the contraband racket as the primary cause.

For its part, Right Sector has staged small protests in major cities, drawing support from other volunteer fighters. They’re demanding the ouster of all officials tied to the shootout and the smuggling ring, as well as that of Interior Minister Arsen Avakov. Members of Ukraine's Pravy Sektor (Right Sector) and their supporters stand in front of National Guard soldiers during a rally in Kyiv on Saturday.

Right Sector chief Dmytro Yarosh, also a parliament lawmaker, has sought to ease tensions by denying reports that members across the country were mobilizing to the region in support of their comrades. Instead, he’s in talks with top officials to end the standoff.

But even if he reaches a deal, experts say, there’s no guarantee the fighters will lay down their arms.

Then there’s the other problem the shootout helped highlight: the influx of weapons into private hands since war broke out last year.

Controlling the flow will be a long-term problem for the government, Karasyov added, especially now that they’re ending up in other parts of the country.

“For that you need a strong army, strong security services, strong special forces — something Ukraine has never had, and still doesn’t have,” he said.

Still, critics warn of dire consequences if the authorities fail to rein in rogue fighters.

“If it is not stopped now, the next time they will be firing grenade launchers in the center of Kyiv,” Leshchenko, the journalist-turned-politician wrote, “hiding behind tales of patriotism and punishing the corrupt.”