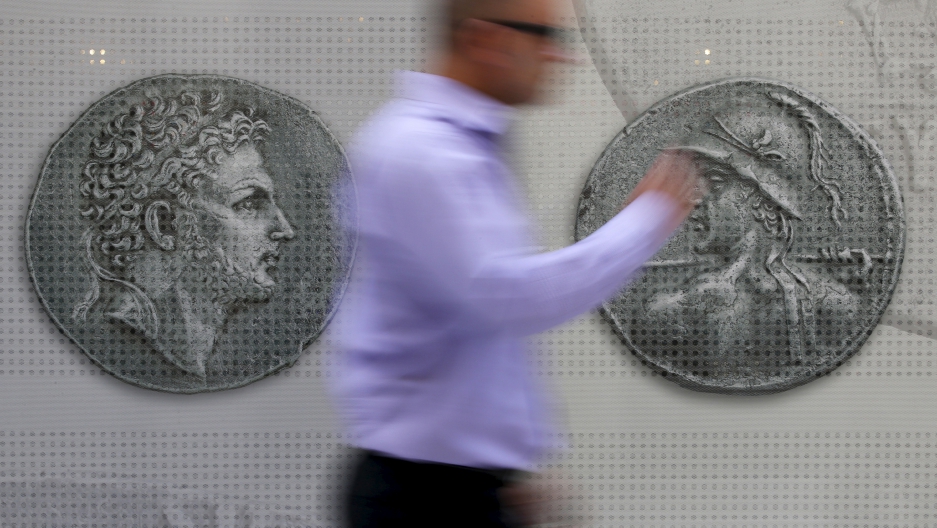 A man walks past pictures of ancient coins in central Athens

The mood in the northern Greek city of Thessaloniki, after the announcement of the latest European bailout deal, is one of palpable relief. That’s the judgement of reporter, Lilah Raptopoulos.

“Of the 50 or so people I’ve spoken with over the last 10 days,” says Raptopoulos, “all of them say a Grexit from the eurozone and the return of the drachma (the old currency), would be a catastrophe.”

“But nobody is celebrating,” she adds.

“I talked to a teacher,” says Raptopoulos, “and she’s lucky to have a stable job. Many of her friends have become unemployed over the last five years of austerity. Her husband is a taxi driver, and his work is less reliable. She put it to me like [this]: ‘We see no light. There’s no real visible end to this difficult time. And it will all just keep being hard.”

One the other hand, Raptopoulos spoke to a lawyer with a more positive outlook. “He’s in his late 30s. His wife is an orthodontist. They have two young children. And for the past few months they’ve been putting feelers out about possibly leaving Greece and moving out to Brussels or London, just to get some stability. Today, they’ve put that on hold. So they’re relieved in that sense.”

Spyros Economides, a professor of international relations and European politics at the London School of Economics and a Greek himself, says the Greek government will have to make a number of reforms if it hopes to actually access those bailout funds and keep people like the lawyer living in Greece.

“For the most part we have issues relating to pensions ... to VAT and other tax revenues," Economides says. "We have reforms of public administrations that are called for. ... It’s a really long range of issues that this agreement addresses and the Greek government has to tackle over the next 48 hours so the funds can be released.”

The Greek government, he says, needs to pass a number of bills through parliament to show eurozone officials the government is serious. After that, European leaders could ratify the agreement reached over the weekend.

“I think the issue right now,” says Economides, “is stabilizing the Greek economic and political system. ... Making some kind of deal retains Greece as a member of the eurozone.”

“I think the key here is that in the very short-term future, by the end of the year, the European partners of Greece should come back and say ‘you’ve acted in good faith, you’ve signed an agreement, you’ve put a lot of the legislative acts in place and attempted to reform. You’ve made austerity measures work and in return now we will consider restructuring your debt.”

One of the knocks against Greece is that it is rife with corruption — as well as that many Greeks don’t pay their taxes.

While that's true to varying degrees, especially on taxes, Economides says “the people in Greece, on the street, are foremost worried about their next paycheck."

"They’re foremost worried about whether they’ll be able to access their accounts in the bank. They’re foremost interested in surviving. … If Greece is going to prosper in the medium to long term, then what really needs to change is the mentality by which Greeks, and I include myself in that, treat the state and how they behave as citizens within the state — rather than abusing the state in a way that has led us in in the long term to the situation we are in now.”