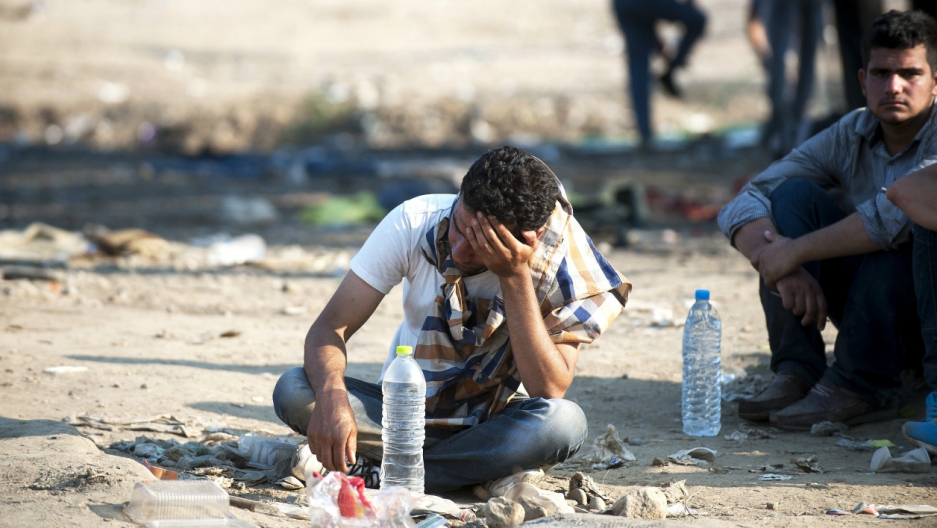 Migrants wait at the Macedonian-Greek border near the town of Gevgelija on July 9, 2015, waiting for an entrance to Macedonia on their way north to European countries.
Credit: ROBERT ATANASOVSKI
Share

In a report entitled: "Climate Change, A Risk Assessment," a global team of scientists, policy analysts and financial and military risk experts painted a grim picture of mankind's future on a much warmer planet.

As rising temperatures and sea levels shrink areas of productive land, humans will have reasons aplenty for warring with one another, they wrote — especially in already turbulent parts of the Middle East and Africa.

Even with average global warming of 0.8 degrees Celsius (1.4 degrees Fahrenheit) from the Industrial Revolution to date, the world was facing "significant problems."

"It seems likely that high degrees of climate change would pose enormous risks to national and international security," said the report.

"Extreme water stress, and competition for productive land, could both become sources of conflict."

"Migration from some regions may become more a necessity than a choice, and could take place on a historically unprecedented scale," wrote the team.

"The capacity of the international community for humanitarian assistance, already at full stretch, could easily be overwhelmed."

This could in turn push governments over the brink — even states considered developed and stable today.

"Countries in the Middle East and North Africa region may be at particular risk," said the report. Many are already facing extreme water shortages along with rapid population growth and predictions for an even drier climate.

Population numbers are also exploding in Sub-Saharan Africa, which already has the highest tally of hungry people in the world, while land temperatures are rising faster than the global average, and arable land is shrinking.

"Climate change is likely to increase environmental stresses on many countries at the same time," said the report, and even sophisticated governments may be unable to deal with the combination of pressures.

"The expansion of ungoverned territories would in turn increase the risks of terrorism."

The power vacuum left by failing or collapsed states are ideal conditions for terrorist groups to take root, and yield larger numbers of marginalized and disenfranchised people from which to recruit.

The report included contributions from over 40 experts from 11 countries, and is meant to guide policymakers.

UN members are negotiating a global pact, to be sealed at a conference in Paris in December, seeking to limit overall global warming to 2 degrees Celsius from pre-industrial levels.

This would be done mainly through cutting emissions of planet-warming greenhouse gases from burning fossil fuels.

Depending on the rate and timing of such cuts, temperatures could already be 5 degrees higher by 2100, said the report, and the sea level between 16 inches and 3.25 feet higher.

"What may appear to be small changes in climate could have very large effects, especially if important thresholds are passed," it warned.