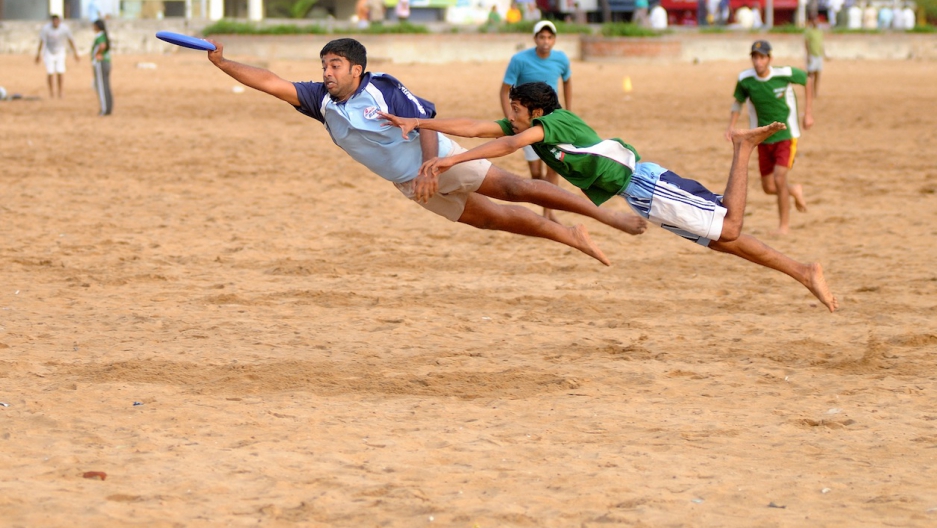 Diving for a pass on the beaches of Chennai.
Credit: Tarunya Suresh
Share

CHENNAI, India — Amid the open drains, stinging flies and makeshift roofs, an unlikely game is taking off among impoverished residents of India’s slums:

Chennai, a coastal southern city with a considerable population of subsistence fishermen, has become India’s hub for the sport, with eight club teams and hundreds of players tossing discs in the city's dry alleys and public beaches.

Over the last seven years this sport—commonly played by co-eds on the lawns of American colleges—has spread all across India, uniting Indians of disparate backgrounds, and culminating in the creation of India’s first under-23 team.

The team is an inspiring mix of people from across India’s social divide. Most sports in India have high cost barriers, particularly cricket, but Ultimate has brought together men and women of different castes, wealth, background, religions, and languages. Crowdfunding is enabling the team, which includes teenagers from the slums as well as wealthy graduate students, to fly to London for the world championships in mid-July. 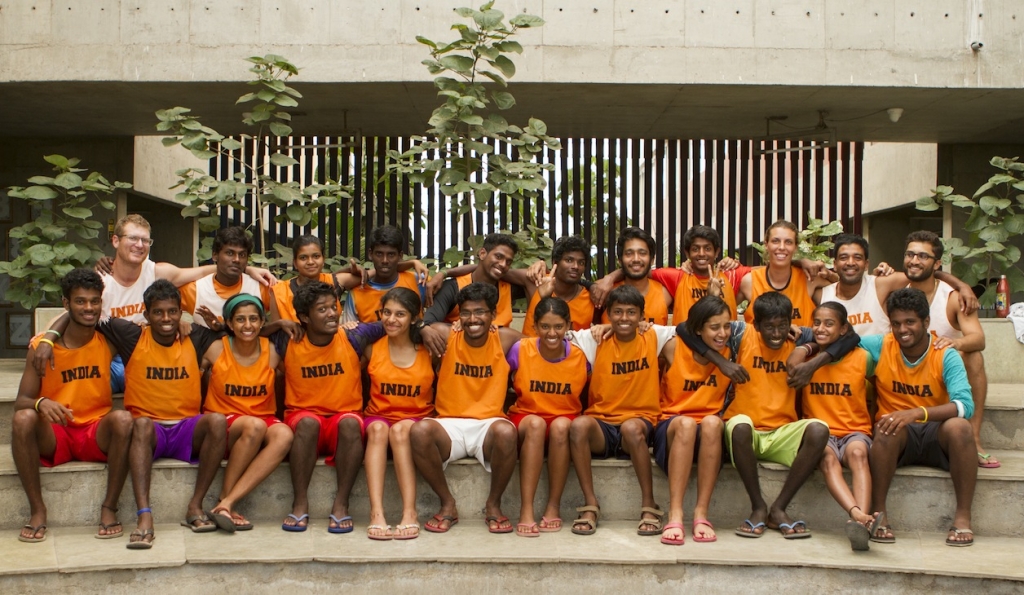 The full squad of India's under-23 team, who are headed to the world championship in London this July.

The game got its start in Chennai thanks in part to Manu Karan, 35, the founder and president of Chennai Ultimate Frisbee, the biggest community of Ultimate players in India. (There are roughly 300 active players in the city, he says.)

Karan fell in love with the sport in Boulder, Colorado, where he learned to play from local university students . He brought it back to Chennai’s beaches in 2007, when he returned to India to enroll in an MBA program. At first, people didn’t know what to make of Karan, asking things like “Isn’t that disc thing for dogs?”

But the Chennai beaches, one of the city’s most popular sites, quickly became a meeting ground for the sport. Because the game was cheap—players didn’t even need to own shoes—people from all walks of life began to join. Ranjani Shanker, 29, a musician, fell in love with Ultimate when a friend told her that to play, all she had to do was “show up.” The game's hypnotic, balletic movements of the players drew the curiosity of slum kids who spent their days on the beaches hanging out. Children of ragpickers, fishermen, and shopkeepers, they watched the games, and soon enough, some asked if they could join.

“It has taken off because it has very basic rules,” says Abhinav Vinayakh Shankar, an engineer and the assistant coach of the U23 team. “It has low entry barriers and no expensive equipment. Plus, I have never met anyone who hasn’t liked it.” India's U23 team in action.

One of the young people drawn to the game was Ganesan, 21. From a family of beach cleaners and fishermen, Ganesan could not afford to play other sports, but picked up Ultimate when someone asked if he could step in during a beach tournament. Thanks to the U23 team, he got a passport, left the country for the first time, and flew to Dubai for the World Championships of Beach Ultimate.

“I was concerned that people from other countries would be very tall,” he recalls.

India placed 11th out of 16 teams. When Ganesan got home, he eagerly showed his parents clips from the games on his phone. They hadn't been able to watch because they don't own a television.

For Ganesan, life before Frisbee was dull and aimless. In the evenings, he, like most of his friends from the slums, had nothing to do but bum around the beaches, steal mangoes from trees, or get into fights and scraps. “Ultimate has taught me to be respectful to others,” he says. “To dress decently. I used to be quite unkempt before. It has given me a purpose.”

Frisbee is life for me.

The success of Ganesan and other Ultimate players from the slums has inspired NGOs to take note. Pudiyador, a Chennai-based NGO that teaches life skills to under-privileged children, and IndiCorps, in Ahmedabad, a city in western India, now use Ultimate as a tool to teach villagers leadership, teamwork, and gender equality.

By playing together, people from the slums “get exposed to the upper middle-class, which does change their aspirations, makes them aim higher,” he says. “Many now want to go to college and work in an office. Some also got English language lessons.”

Another player of impoverished background credits the game with broadening his social ties. “Earlier, I would hang around with my friends only on the beach,” says Hariharan, 21. “Before I would not think of interacting of people from different classes of society. It would be intimidating.”

In India, Ultimate has also helped bridge gender gaps. The rules mandate that for every 4 men on a team, there must be at least 3 women. Amid the country’s notorious struggles with gender inequalities and sexual violence, the interactions on the playing field (or beach) force players to learn comfort and respect.

“Lots of these kids haven’t interacted with the opposite gender ever,” says Shanker, the musician. “They don’t talk, forget playing.”

When Shanker first took the field, she remembers having to tell off men on the team who wouldn't pass to her. “When they saw a girl, they looked away. It has been a learning curve for all of us," she says. "Initially you will always have men not throwing to women because ‘They don’t run fast or can’t catch.’”

The past year has been a whirlwind for the organizers of India's U23 squad, who have had to run to various corners of the country for try-outs, training camps, and events to raise $2,000 per player. The team has depended on diverse kindnesses: Australian Ultimate players donated each Indian player a pair of cleats. Players have juggled studies, jobs and training. The lack of access to gyms, weights and playgrounds has required developing some low-cost training regimes, which Dan Rule, the Australian coach has devised.

Some of the players are already finding ways to give back.

Ganesan, for his part, has started coaching peers in the slum. Many are inspired by his success, which shows that Ultimate can open doors to a world outside their tough daily lives.

“My mother initially didn’t get the sport,” he recalls. “She asked me to quit. But before I left for Dubai, she said, 'I want you to win.' Now she understands why frisbee is life for me.”