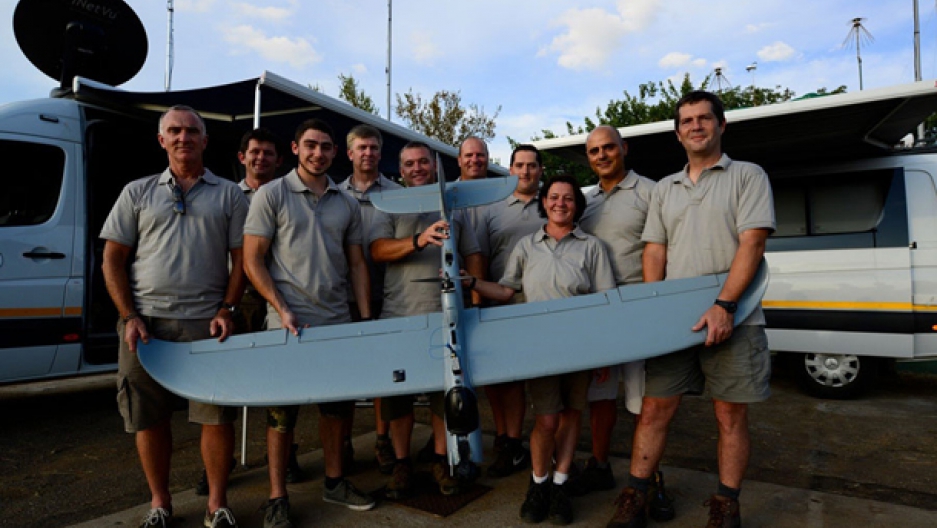 Staff members of South Africa-based UAV & Drone Solutions hold one of their drones. UAV supplies the drones and the ground crew for the Air Shepherd Initiative. Where these drones have been deployed, poaching has stopped.
Credit:

In the wake of record numbers of rhinos slaughtered in 2014 by poachers in South Africa — an estimated 1200 — there is a glimmer of good news: a high-tech anti-poaching technique is stopping the bad guys in their tracks.

And so far it has proven extraordinarily effective, according to John Petersen, chairman of the Charles A. and Anne Morrow Lindbergh Foundation, the organization that’s spearheading this effort.

For the six months that drones were tested in areas of South Africa that had previously lost 12 to 19 rhinos a month, not a single rhino was killed. Similarly, when park rangers tested the predictive analytics in a private game reserve, they captured 24 poachers and no rhinos were killed.

The combination of these two technologies has the potential to shut down poaching entirely in areas where they are deployed, Petersen says.

The idea for using predictive analytics was developed at the University of Maryland, which got a contract from the Department of Defense to create a tool that could predict the location of roadside bombs in Iraq and Afghanistan.

“By using historical information, topography, access routes, infrastructure and those kinds of things, over time they became very accurate at predicting where these bombs were going to be,” Petersen explains.

The head of that program, Tom Snitch, figured out that these same algorithms could be applied to anti-poaching efforts.

Solving the poaching problem depends, of course, upon knowing where the animals are at any given time, Petersen says, and some of these game parks are the size of Connecticut. “If you've got a little model airplane and you don't have any idea particularly about where to fly it, then you're wasting your time,” he says.

So, using the University of Maryland technology, Air Shepherd created databases that include the topography of the land and historical information about where poaching happened in the past: the time of year, the time of day, the weather, the location of watering holes, how close to the roads the animals were and many other factors.

Patterns emerge that allow the team to know with a high degree of confidence where the poachers will be, if they appear.

“The computers work all of the data and come up with a flight plan that says, ‘Tonight here's where the problem is and here's how you should fly your drone,’” Petersen says. “We download the flight plan and pre-position the rangers in that area and then launch the drone.”

The drone is launched from a mobile operations center that monitors its information in real time.

“In most cases, the poachers are in cars. They drive down the road, and they stop,” Petersen says. “Then we can alert the rangers — and because they're positioned close by, they can get there in a hurry and capture the person and arrest them before they have a chance to kill the animal.”

Then they upload all of the information from that day back to the computer, which makes the database more robust.

“We've joined the most effective operational capability on the ground with this supercomputer-based predictive analytics — and where we've tested it, it stops poaching,” Petersen says.

Wildlife conservationists believe that rhinos in South Africa will be extinct within eight or 10 years if the killing continues at its present rate.

“That is just psychologically, fundamentally, disconcerting,” Petersen says. “So it is exciting that we have the capability to be able to stop this poaching.”