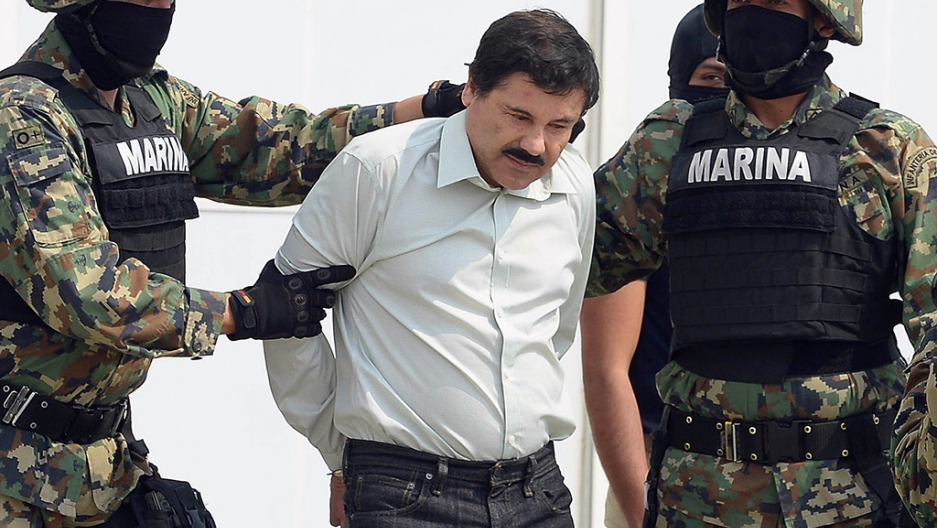 Mexican drug trafficker Joaquin Guzman Loera aka 'el Chapo Guzman', is escorted by marines as he is presented to the press on Feb. 22, 2014 in Mexico City.
Credit: Alfredo Estrella
Share

MEXICO CITY, Mexico — Mexicans are used to stories of extraordinary prison escapes. In one case, more than 140 inmates stormed out of a penitentiary near the border with Laredo, Texas. In another, 53 prisoners fled in a convoy of 17 vehicles backed by a helicopter in Zacatecas.

Yet the news of the jail break that woke people here on Sunday still beggared disbelief.

Drug trafficker Joaquin “Chapo” Guzman was in the nation’s supposed top security prison, Altiplano, the Mexican answer to the US Supermax. His arrest in February 2014 was hailed as a victory for President Enrique Pena Nieto for capturing the world’s most wanted man. The US government had put out a $5 million reward for him and asked for his extradition. And Mexican officials promised to keep an extra eye on the 60-year-old Guzman, who had escaped before, fleeing a prison in 2001.

But despite all the security and profile of the convict, Guzman waltzed out through a 1.5 km (one mile) long tunnel that boasted air vents, electric lights and a motorbike on rails, Mexico’s National Security Commissioner Monte Alejandro Rubido said at a hastily-called press conference.

“Along the tunnel, they found construction tools, oxygen tanks, containers with fuel and plastic tubes among other things,” Rubido said. “The passage came out at a construction site.”

Guzman had last been seen around 8 p.m. Saturday night when he received his medicine, Rubido said. On learning that he was missing late Saturday, authorities shut the prison down and launched a manhunt. They also grounded planes in the nearest airport of Toluca. The Altiplano prison is about 90 km (60 miles) from Mexico City.

After the jaw dropping at the news came a storm of criticism.

Opposition politicians, pundits and the twitter public lashed out at how the government could let such a convict slip their fingers.

“The really worrying thing about the second escape of Chapo Guzman is that it shows evidence of the weakness of the institutions of our country,” said Senator Alejandro Encinas of the leftist Democratic Revolution Party. “There is a blatant vulnerability to the power of money, and the power of organized crime.”

Many on social media called for officials to step down over the incident.

“The escape merits the resignation of (President) Pena, but as that won’t happen, at least of all the security cabinet,” this tweet says.

President Pena Nieto himself had just touched down in France for a state visit. He is expected to make a statement later Sunday.

Hailing from a ramshackle mountain village, Guzman rose to head the Sinaloa Cartel, Mexico’s oldest and richest network of traffickers.

After being arrested in 1993, he escaped prison in 2001, shortly after former President Vicente Fox took power.

Trafficking tons of cocaine, marijuana, heroin and crystal meth to the United States, he reached the Forbes list of billionaires.

At the same time, Sinaloa Cartel gunmen killed thousands to get control of the lucrative trafficking routes in border cities such as Tijuana and Ciudad Juarez.

Since 2007, Mexican drug cartels and the security forces assigned to fight them have killed more than 83,000 people, according to a government count.

Guzman’s nickname Chapo means Shorty as he is about 5 foot 6 tall, despite his larger than life trafficking stature. Following 13 years on the lam, Mexican marines caught him in the seaside resort of Mazatlan in 2014.

It was found he had used an elaborate network of tunnels then to escape police for so many years.

Such exploits are celebrated in hundreds of songs, known here as narco corridos or drug ballads.

One by the Tucanes of Tijuana describes his 2001 prison escape.

“The escape was well planned. Without a risk of failure,” the singer croons over a polka-style beat. “That is how the big ones work. Like Shorty Guzman.”