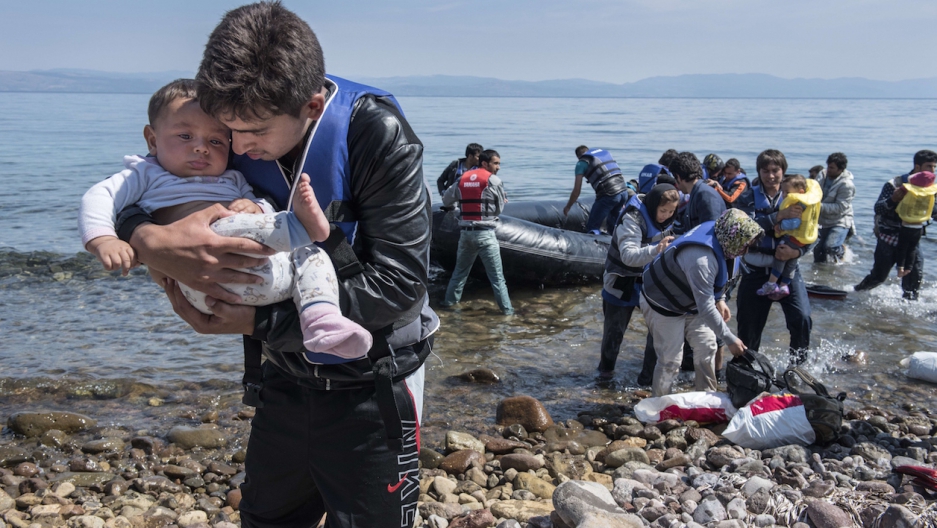 Afghan refugees arriving on the shores of the Greek island of Lesbos.
Credit: Soeren Bidstrup
Share

Chanda, 37 years old, expects to see five to 10 clients today. The hairdresser's — a hangout for the city’s Bangladeshi and Pakistani community — used to serve 10 times as many. In better days, the barber would take home 400 euros a week. These days, he’s lucky to make 100 euros ($112).

“I haven’t sent any money home for two months,” he says.

By home, he means Dhaka, Bangladesh. A decade ago, he paid a smuggler to take him overland to Greece, leaving behind his wife and two young daughters. The 200 euros he used to send them each month would cover their rent and food. Now, Chanda finds himself in a terrible dilemma. As Greece sinks, so do his hopes of supporting his family. And with no papers, he can’t return home to be by their side. Not that he’d be able to afford the trip.

Greece isn't just stuck in a major debt crisis. It's also at Europe's gateway for migrants risking it all to flee poverty and war in their home countries. According to the United Nations High Commissioner for Refugees, 48,000 arrived in the country in the first half of this year alone.

In the midst of the country’s economic collapse, the ruling Syriza party has embarked on controversial reforms to Greece's immigration system that's hitherto been characterized by epic-scale police sweeps and hellish detention centers. That proved not to work. Hundreds of thousands are trapped in legal purgatory — without documents or money.

In the ancient port of Piraeus, near Athens, Joseph Alexander is hanging around the back of a market in the hope of picking up the odd job or two. The 45-year-old arrived from Dar es Salaam, Tanzania, longer ago than he cares to remember. “I came here to find something better,” he shrugs. “Africa was Africa. Europe was Europe.”

For several years, he worked on the ships as a deck hand, earning 20 to 30 euros a day. But, in 2011, with industry’s decline, the work suddenly dried up. The idea of finding that kind of work again is “like a dream,” he says.

Eventually, he is enlisted to lift some boxes for one of the stall owners, returning later with some bread and a sausage. These days, he is paid with food, he says. “They also give me something to drink if I need it.” He’d like to leave the country, but, like Chanda, is caught between the cracks. “I am going crazy,” he says. “Because even for the people of this country, hope is finished.”

Alexander spent a year in prison, part of the so-called Operation Xenios Zeus, a violent crackdown on irregular immigrants launched in 2012 that earned the country international condemnation. Successive governments had allowed the far-right Golden Dawn party to infiltrate the country’s police force.

The new left-wing government has ditched Xenios Zeus. But talking to local Greeks in Piraeus, an area with an unemployment rate of 28 percents, tensions are running high. Allegiances are split between the Communists and Syriza, on the one hand, and Golden Dawn, on the other.

“Maybe we are not the best country to give them help. We can’t help ourselves.”

“Immigration is a huge problem that has created a lot of fights,” says Nikos, an employee at the local betting shop. “We would like to help them. But maybe we are not the best country to give them help. We can’t help ourselves.”

Nancy Retinioti, a social worker with the Athens branch of Doctors of the World, a nonprofit offering free assistance with accommodation and medical treatment, says she’s seen an increase in migrants suffering stress and depression.

It’s due to a mix of factors — previous traumas suffered back home or on the journey to Greece are compounded by the fierce challenges of adapting to a society in crisis. Around 70 percent of the 45,000 who sought help last year were migrants, she says.

Part of Syriza’s immigration reform package will involve granting citizenship rights to first- and second-generation migrants, who have been through the Greek education system. For many migrants in limbo, it will not change much. But, it’s a start. Retinioti suspects many of the beneficiaries will move on as soon as they have passports.

“What many want now is to go to another country. They want to live like human beings,” she says.

Tina sits in a bar by the promenade, lit by the twinkling lights of nearby ships. The 27-year-old arrived here from Ethiopia nine years ago. For the first few years, she worked as a nanny.

She swipes through the images on her phone until she finds one of a blue-eyed baby. “Two years, I looked after him,” she says. “But, then his parents stopped paying me.”

Now, as she puts it, she “entertains” men coming off the ferries. They come from places like Russia, China, Sweden and France. “I feel bad about it,” she says. “I do not have the character for this work. But I must feed my daughter,” she says. Seven years old, she is waiting at home alone.

“She is so good. When she is hungry, she doesn’t tell me to buy food. She just goes to sleep,” she says.

“I want a good future for her and me,” she says. “I would go anywhere.”

“But, we are trapped in this country.”