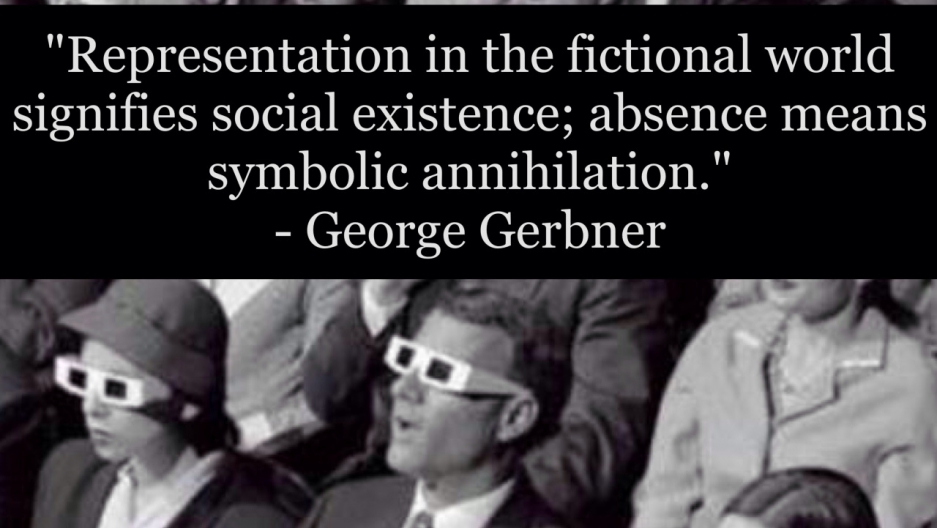 Venezuelan American actor Dylan Marron was sick of being told that there wasn't enough work in Hollywood for his "type."

So, he created the Every Single Word project, where he posts re-edits of some of his favorite mainstream films — with all of the parts where white people speak edited out. What's left? The speaking roles of actors of color. Moonrise Kingdom, an hour an a half long film, is reduced to 10 seconds. American Hustle, two hours and eighteen minutes long, has less than a minute of speaking lines for its non-white actors.

We spoke to Marron about his personal experiences as an actor and film lover who yearns to see race blind casting become the norm in Hollywood, how his popular Tumblr came to fruition and his advice for fellow movie lovers who wish to see Hollywood embrace diversity.

Isis Madrid: Tell me about yourself.

Dylan Marron: My name is Dylan Marron. I'm 27 and I'm an actor, writer and director living in New York. I like creating work that brings people together and starts conversations. I like consuming work that challenges me and expands my lens to the world.

IM: What inspired you to make the Every Single Word series?

DM: As a young kid and avid moviegoer I never really saw my reflection on film. Nobody really looked like me and, consequently, I wondered where I fit in to the bigger picture. George Gerbner coined the term symbolic annihilation in 1972. “Representation in the fictional world signifies social existence; absence means symbolic annihilation.” That really sums it up best. Did I exist? The stories I consumed suggested I didn't. Or worse, shouldn't.

In high school, casting directors who had seen me in school productions would sometimes call me in to audition for features or pilots or plays. Out of these auditions I sometimes got meetings with agents and they would tell me that I'll never play the romantic male lead and that they weren't sure how much work is out there for my "type." I accepted this as truth.

I went to college, joined a sketch comedy group, learned how to write and began developing material for myself. If there weren't parts out there for me, I figured I'd create them.

Currently, I'm a working actor and writer. I'm probably best known for voicing a beloved character on a popular podcast, Welcome to Night Vale. I was also in a well received web series and I'm in a large televised ad campaign in the US. I was just nominated for a Drama Desk Award for a play I wrote and directed this year. The meetings with potential agents have started again, and I'm being told the same thing as when I was in high school. I won't play the romantic male lead and there aren't many parts for my "type." It seems like no matter how far I've come, how much work I have under my belt, this industry still finds a way to tell me what I can and can't represent.

This series is a way of highlighting why I keep being told that there isn't much work out there for me and why so many other talented and hard working actors of color are being told the same thing.

I'm not picking these films because I don't like them. On the contrary, I actually really enjoy them. I read The Fault in Our Stars and cried my eyes out. I love that book. But nowhere in John Green's exceptional novel was any character's race ever mentioned. Why is whiteness the default? The story is not about whiteness, it's about love and loss and mortality. If Hollywood keeps using white actors to tell universal stories then it is suggesting that people of color don't fit in to the zeitgeist of human emotions. Or, maybe even worse, they shouldn't.

IM: Why do you think Hollywood continues to ignore this blatant whitewashing?

DM: I think one crucial way to understand this is that these stories are often told through the lens of straight white men. If you only have one demographic telling stories — and, maybe even more importantly, financing them — you're going to get an incredibly narrow scope of human experience.

IM: How long will you continue your project for?

IM: Was there a particular film that struck you as very whitewashed that inspired you to do something about it?

DM: It wasn't one particular film but a pattern I kept seeing over and over again. I finally got to the point where I just had to find a way to share what I was seeing.

IM: Who are some of your favorite actors of color that you wish Hollywood would feature more?

DM: Well, I think there is some incredible talent that we already know of. I think Mo'nique gave one of the best performances every captured on film in Precious. And there are other people I love. People like David Oyelowo, Rosie Perez, Sandrah Oh. But, maybe more devastatingly I think there are so many incredibly talented people we don't know about. People who we're never even going to hear about because they were told that there wasn't going to be a place for them in this industry or that the climb would be too steep.

IM: What are your top three films starring people of color?

DM: This is a hard question to answer. I like stories. That's what draws me to these films. It's hard to choose favorites. I think Beasts of the Southern Wild is an incredible film. I just saw Dope, which I loved. Also, Rob Marshall's 1997 adaptation of Cinderella is such a perfect example of how well race-blind casting can work.

IM: What can people who hope to see more actors of color on screen do to make it happen?

DM: Vote with your money. Support projects that you believe in, and go buy tickets to films that feature diverse voices that may not be in wide release — yet.

IM: Anything else you’d like to tell us about? Other projects you’re working on?

DM: I'll be touring more with Welcome to Night Vale, and I'll keep writing and performing in New York City. I have some exciting film projects in the works, too.