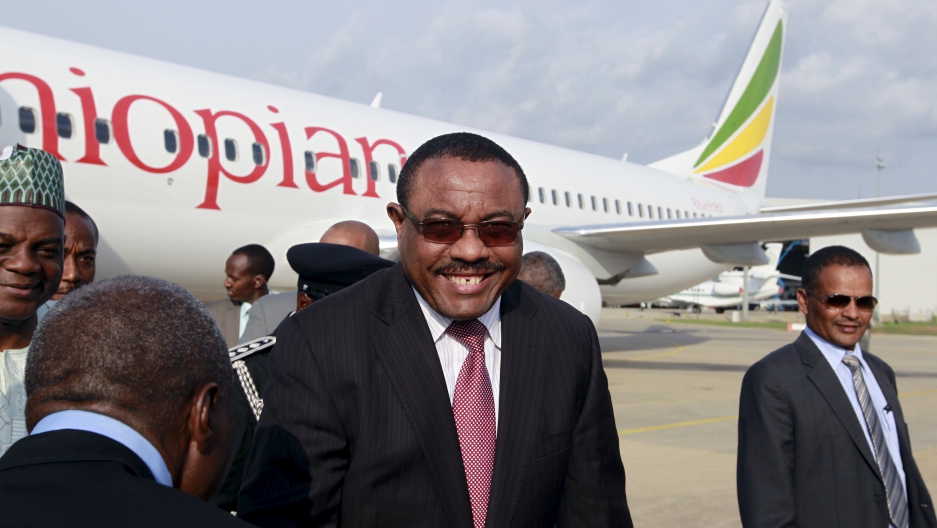 Ethiopia's Prime Minsiter Hailemariam Desalegn arrives at the presidential airport in Abuja, Nigeria May 28, 2015. What's he up to?

In the past two days, Ethiopia has released six writers who had been held in prison on highly questionable "terrorism" charges. The timing hardly seems coincidental — the move comes on the eve of US President Barack Obama's historic visit to the country later this month.

“Honestly I didn’t expect this. The Ethiopian government has very thick skin when it comes to international pressure, despite being huge recipients of foreign aid,” says Tom Rhodes, east Africa representative for the Committee to Protect Journalists. “They want to avoid some difficult questions that would have been asked by Obama during his time in Addis Ababa.”

Activists have greeted the move with muted celebrations — they welcomed the news, but were left wondering why other imprisoned journalists are still languishing in jail.

“We’re happy but didn’t want to celebrate at the same time. It’s really difficult to celebrate when other friends are still in prison,” says Soliyana Gebremichael, 28, an Ethiopian human rights activist and cofounder of the Zone 9 blog, who lives in exile in Washington, DC. “We are going to keep on pushing.”

Courtesy of the CPJ

The latest journalist to be freed, columnist Reeyot Alemu, was released Thursday, about a year ahead of schedule after spending the last four years in prison. The day before, three other journalists and two bloggers with Zone 9, a political commentary site, were released after the government dropped all charges against them. The five were arrested in a crackdown in April 2014 and charged under the country’s sweeping anti-terrorism law, which human rights organizations say criminalizes dissent.

Ethiopia’s ruling party, the Ethiopian People's Revolutionary Democratic Front (EPRDF), first cracked down on press in the wake of mass protests following a contested election in 2005. Another prominent journalist, Temesghen Desalegn, was arrested in October. More recently, the Zone 9 bloggers were arrested in April. There were also widespread reports of intimidation and harassment of opposition supporters ahead of parliamentary elections in May, which were dominated by the EPRDF.

Rhodes hopes that the release of the six journalists could be more than just a nod to Obama’s pending visit, but could also signal that the EPRDF, fresh off its sweeping electoral victory, may now be confident enough to tolerate dissident voices. According to the Committee to Protect Journalists (CPJ), there are 12 journalists still in prison in Ethiopia facing similar charges, including four other contributors to Zone 9.

“I’m hoping this might be a page turner in Ethiopia’s poor track record on press freedom, Rhodes says. “I’m hoping that their fear of critical voices upsetting the elections and their firm grip on power has now dissipated.”

Rhodes says that the government’s crackdown over the last year led many journalists to flee, hollowing out the country’s already small press corps. He hopes that trend begins to change.

“Maybe this will stave off the flow of journalists leaving the country and, who knows, if conditions improve, people will feel brave enough to return. I certainly hope so,” he says.

Endalk Chala, a founding member of Zone 9, is one of those who left. He studies at the University of Oregon, and has relentlessly sought to draw attention to the fate of his former colleagues by writing about their trial at trialtrackerblog.org and on Twitter with the hashtag #FreeZone9Bloggers.

He is happy to see some of his friends freed, but believes he still has work to do.

“I was lucky. There is a guilt feeling that I have been experiencing since their arrest,” he says. “The trial tracker and the hashtag and everything is a reflection of that because I feel that because these are my friends. Some of them are really my close friends. You feel obligated to do something. I’m happy if [my efforts] have helped create change. But I feel cautious. The remaining members of the blogging community should be free.”