We think of Tony Bennettas a golden-voiced crooner, an honorary Rat Pack member who made standards out of "Blue Velvet" and "I Left My Heart in San Francisco." But when Bennett first performed, "Boulevard of Broken Dreams," his signature blend of buttery vibrato and theatrical delivery was met with skepticism and, sometimes, distaste. Audiences expected to be able to dance to the music, Bennett explains to Kurt Andersen, "so if you did a ballad, you had to sing a long line so that people could do a smooth foxtrot to it. And mine was jagged." But Bennett stood by his musical choices even when his contemporaries scoffed. "The only way to be different is to be yourself," he says. This summer, Bennett is continuing his tradition of being different by touring with Lady Gaga. Even at age 88, the singer has some surprises up his sleeve.

Bennett took up singing during the darkest years of the Depression. "The whole family, my uncles and nieces and aunts, and everybody would come over to my house," he says. "And they'd put my brother, sister, and myself in a circle, and we would just entertain them," he tells Kurt. The family ritual provided him with both discipline and inspiration. "We couldn't wait, every Sunday it would happen. So we had to come up with something different every weekend."

After serving in World War II, Bennett studied voice at the American Theater Wing in New York. His favorite teacher discouraged him from imitating other singers. "She said, 'Find out the musicians that you really like and then try to incorporate that into your singing," he recalls. Bennett drew from the jazz players Art Tatum and Stan Getz to create his unique sound.

Bennett's longstanding friendship with Frank Sinatra inspired him to fund the Frank Sinatra School of the Arts, a public fine arts high school in New York. "There are no places for young people to break in [to the business]," he explains. Bennett hopes students will go out and perform in their communities. The most important thing is that "they're getting in front of people," just as he did in his formative years. 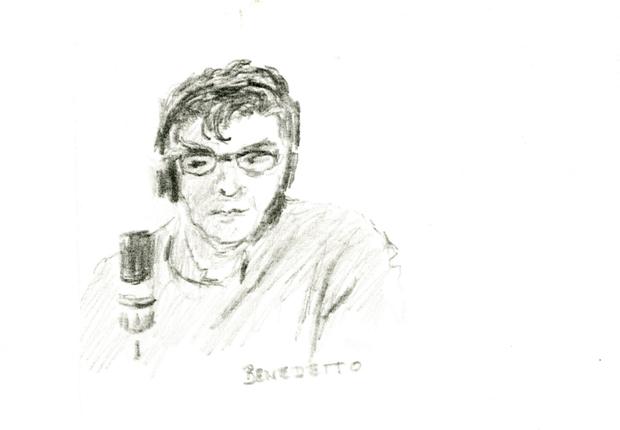 While being interviewed, Tony Bennett was busy drawing this portrait of Kurt Andersen
(Tony Bennett)