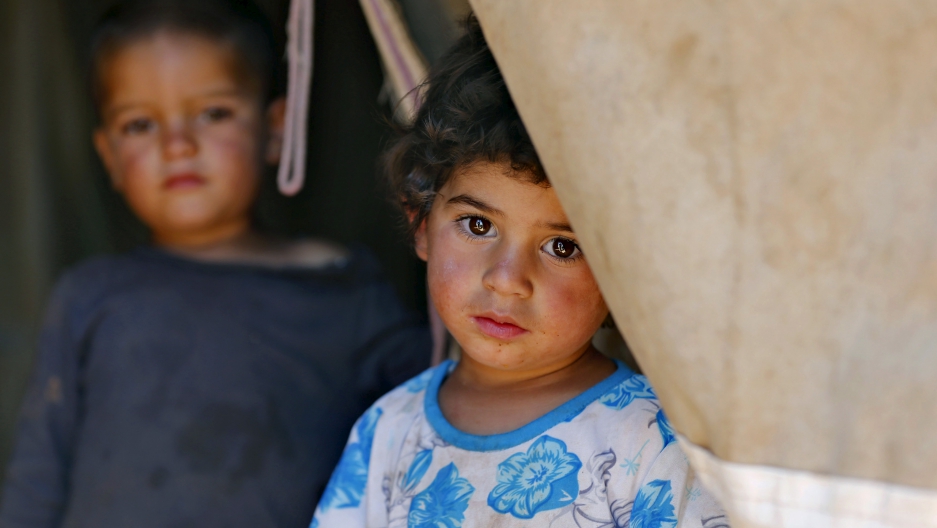 A Syrian refugee child who has been living in a tent in Jordan since fleeing her hometown of Idlib.

Half of Syria is on the run.

In what is now being called the largest exodus from a single conflict in a generation, more than 11 million Syrians are either displaced from their homes inside the country, or have fled across the border.

"That is an implosion of absolutely fundamental, almost biblical proportions," says David Miliband, the president of the International Rescue Committee and a former British Foreign Secretary. "What the people are saying to us, to all of our staff there, is 'Has the world forgotten us?'"

The burden of the refugee crisis is being shouldered largely by Syria's neighbors, especially Lebanon, Jordan and Iraq, Turkey. The United States has historically been generous to refugees from war-torn nations. But it has offered a home to fewer than 1000 Syrians since the conflict began more than four years ago.

Miliband calls the international inertia on Syria's refugee crisis "striking." He says the fatigue stems in part from the conflict's complexity.

"There is, for obvious reasons, in the wake of Iraq and Afghanistan, a fear in the West of getting its fingers caught in the mangle of another Middle East confict," Miliband notes.

Before the war, the vast majority of Syrians had no desire to leave their country. Chicago-based Syrian-American activist Ala'a Basatneh says she has hundreds of friends and relatives who've left.  A close friend of hers — she called him "Mo" although that's not his real name — was determined to stay in Damascus throughout the war. His goal was to graduate with an engineering degree from Damascus University. And although he was a visible opposition organizer, Basatneh said he was committed to non-violence.

"He was the kind of person where he would go out on the street and hand flowers to protesters so they can protest with flowers in their hands," she recalls.

Then a few weeks ago, Mo's life took a dramatic turn. He was picked up by Syrian authorities and held for ransom. Basatneh says government officials have asked for approximately $50,000 for his release.

"The regime has been battling the Syrian revolution for five years now. They are losing resources, they are losing money," she says. "They hardly have anything so now they are up to the point where they're detaining activists and asking for money."

Basatneh has been talking with Mo's family in Damascus on a daily basis. She says Mo's mother still hopes her son is alive.