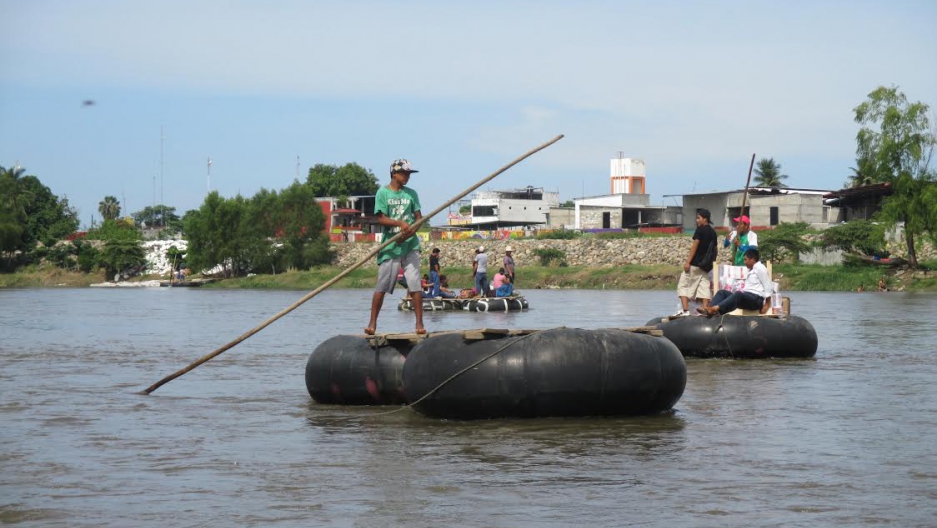 CIUDAD HIDALGO, Mexico — Honduran migrant Gerardo Cruz never saw the face of the man who pushed him off the train's ladder as he rode through Chontalpa, Mexico. But through the black of that March night, 20-year-old Cruz said he could make out the white lettering of “Policía Federal” or “Federal Police” on the man’s dark blue uniform.

When Cruz fell, he said, his left arm landed on the tracks and the train's wheels severed his limb.

“The government officials were the cause of this problem,” Cruz said of his injury, speaking in Spanish. “There should be compensation because this is a crime.”

Mexico’s Southern Border Program was launched in July 2014 in response to an influx of Central American migrants crossing through Mexico, creating a crisis that included tens of thousands of unaccompanied minors arriving at the US border. The program was designed to manage Mexico’s 750-mile border with Guatemala and Belize while protecting migrants settled in the country or en route to the US.

Yet abuses against migrants by both criminal gangs and authorities are actually spiking, according to humanitarian organizations working in Mexico.

“The Southern Border Plan was created — supposedly — to give security to the people coming from countries in Central America, but that’s not true,” said Chiapas-based immigration lawyer Elvira Gordillo.

“Instead of ensuring the safety of migrants, much more violations of human rights in all forms are being committed,” she said to a delegation of activists, religious leaders and lawyers from Los Angeles as they gathered in Tecun Uman, Guatemala. The group stood on the river bank with their backs to Ciudad Hidalgo, Mexico, having just crossed the river separating the two countries on rafts made of inner tubes and wooden planks as a symbolic gesture of solidarity with migrants and all they endure.

Migrants risk being kidnapped, murdered or robbed on their journeys, and human rights group Amnesty International reported on June 18 that "more than 200 migrants, including several children, were violently attacked and several killed by armed groups in two separate attacks in the last two weeks."

Organized crime, local bandits and government officials all act as perpetrators of these crimes and impunity is the norm, according to Amnesty. If apprehended, migrants can also face extended stays in detention centers or deportation.

“Mexico has become a death trap for migrants, with vicious criminal gangs at every corner waiting for their opportunity to attack them for a few dollars, while authorities at the state and federal level are more eager to deport people than to save lives,” said Erika Guevara-Rosas, Americas director at Amnesty.

For migrants traveling through Mexico to reach the US, the journey has always been dangerous. This remains true despite the recent government efforts, according to Father Heyman Vazquez, who runs a shelter called Home of Mercy in Huixtla, Chiapas.

“In Mexico, the law is one thing and the implementation is another,” said Vazquez. “The law is there, but it is never carried out. The migration is going to continue. We all know that.”

Increased security on “La Bestia” — the nickname for the freight trains migrants hopped for free but treacherous rides north — has caused migrants to travel riskier routes through less populated areas where they are more likely to be targeted for crimes and sexual assault.

Patron Saints of The Beast from GlobalPost on Vimeo.

Meanwhile, a Washington Office on Latin America report released last month noted that Mexico now detains more migrants than the US does as US Border Patrol apprehensions have decreased in the last year. Apprehensions of unaccompanied minors decreased by 50 percent from 2014 to 2015 in the Southwest Border Region, the most popular crossing area for Central American migrants.

But this does not necessarily indicate that the flow of migrants from Central America has abated. US Border Patrol statistics only show how many migrants reach their destination. More than 90,000 Central American migrants were apprehended in Mexico from October 2014 to April 2015, compared to under 50,000 during the same time period the previous year.

The Southern Border Program dedicates substantial resources to border infrastructure. The US has provided equipment and training to Mexican officials to ramp up border security through the Merida Initiative, a bilateral agreement through which the US has funneled more than $1 billion to Mexico since 2008.

When the amputee Cruz left his home country on March 2, he only made it to Chontalpa in the Mexican border state of Tabasco, about 250 miles from Guatemala, before his alleged encounter with Mexican Federal Police. Cruz still had 1,200 miles left on his journey to Houston, where his uncles live.

“In Honduras, what am I going to do?” Cruz said in Spanish while sitting on a cot in a shelter in Tapachula. He left because of gangs and lack of jobs in his home country, two issues that he believes perpetuate each other. “You don’t have freedom there.”

Cruz rested one arm in his lap. The other sleeve of his red Timberland V-neck was empty where doctors amputated his arm just below his shoulder. They were unable to save his arm because the wound became infected during his hours-long walk looking for help. Cruz now has a temporary visa to stay in Mexico until April 2016.

But the US is still his final destination. When there, he hopes to continue his studies to become an accountant.

“To the US government,” Cruz said. “Help me to have a way to enter the country and study.”