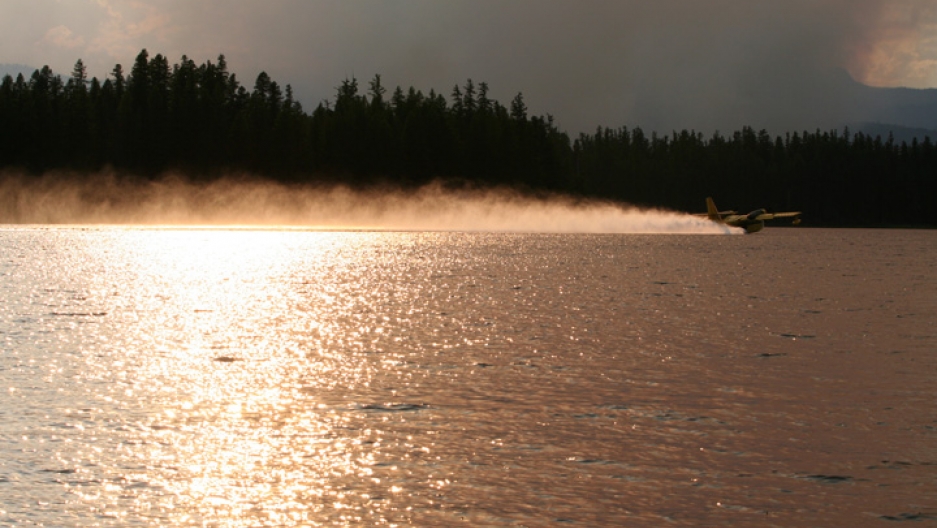 One of the best-known firefighting planes, the CL-215, refills its water tanks by skimming the surface of lakes.

If you thought you were having a hot summer, try fighting forest fires from a plane.

There are more than 200 wildfires burning in Canada right now. Since April, half a million acres have burned in British Columbia alone. That’s already twice BC’s yearly average, and the season has only just begun. And it doesn't account for hundreds of other fires burning in Sakatchewan, Manitoba and Alberta.

To put out the flames, the Canadian government is looking for all the help it can get. Firefighters have been called in from the United States, and from as far away as New Zealand.

Private companies have gotten involved, too — including “Air Spray Airtankers,” which has long-term contracts to maintain fleets of firefighting planes in Canada and the US. “We operate converted Lockheed Electras,” says the company’s vice president, Paul Lane. The planes have 4 engines and were first built in the 1960s.

Lane explains that each plane carries a 3000 gallon tank filled with a mixture of mud and flame-retardant liquid. The aim isn’t to put fires out — it’s to stop the spread of fires so helicopter and ground crews can come in.

Pilots have to remain on constant alert, stationed at remote bases in a strategy calledinitial attack. “When a fire call comes in, we’re looking to dispatch our aircraft immediately to the fire, and strike it quick and hard,” he says.

Once Air Spray planes have dropped their load, they land at bases to refuel and refill their tanks with mud slurry. “It’s much like in a Formula One race, going in for a pit stop,” says Lane. “Our pit stops typically take about 8 minutes to turn around.”

Thanks to a dangerous combination of climate change and man-made fires, fire seasons appear to be worsening in much of the world. “With long term drought conditions, fires are just getting bigger,” says Lane. In the absence of humans, natural fires would clear out dry fuel. Ironically, firefighting can lead to the accumulation of flammable material.

“And with more people living in wilderness conditions, having holiday homes, etcetera, what we’re seeing is a growth in the impact of fires,” Lane adds.

As destructive as wildfires are, Lane says the view from the cockpit can be unbelievable. Pilots slow their aircraft down and sink to as low as 30 feet from the treetops. When pilots drop a full load, the plane abruptly loses one-third of its weight. “All of a sudden you have an incredible lift in the aircraft. You’re that much lighter.”