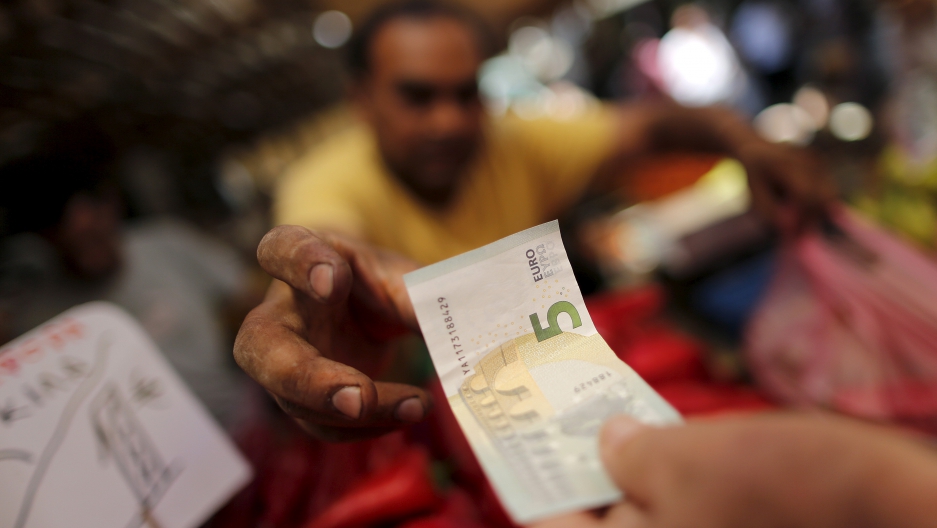 A vendor gets a five Euro bank note from a customer at the central market in Athens, Greece, July 8, 2015.

Lettuce farmer Andonis Vezyroglou is suffering from the effects of the Greek debt crisis, first hand.

“We expected some drop in sales,” he says. “But we did not have a clue what it would mean.”

So far, his sales have dropped between 20 and 25 percent in the past week, and he has no idea how much further they will go. “You’re not sure you’re at the bottom of the sea, until you can start going up.”

Vezyroglou and his father run a large lettuce farm in Alexandria, a small town outside of Thessaloniki, in northern Greece. They supply supermarkets and smaller retail outlets across the country.

Many of his suppliers are only accepting cash. For example, it takes longer for Vezyroglou to get the cellophane he needs to wrap his product. Excess product is being destroyed or given away. He’s already cut production plans for the rest of the year.

“He has one supplier from Holland,” says reporter, Lilah Raptopoulos, who met with the Vezyroglous, “who is asking for cash because they don’t trust the Greek banks. He may not have the cash because businesses, just like people, can’t just take out that amount of money from a bank. So he has to wait for a customer to pay him, for him to then pay this company, which is so mistrustful of the Greek banks that they’re sending a man to Greece to pick up this cash and bring it back to Holland.”

As a result the Vezyroglous are struggling to figure out how, physically, to pay their suppliers — and how their customers we'll pay them. Raptopoulos says they are also afraid “that there will be ‘haircuts’ on their bank accounts.”

“The good thing about their business is, it’s food,” Raptopoulos says. “People will always need food. Some [other] businesses are losing 80 percent of their business.

“The problem with their food, though,” she adds, “is that when people are pinched, they buy non-perishables; they don’t really buy lettuce and tomatoes and things like that.”