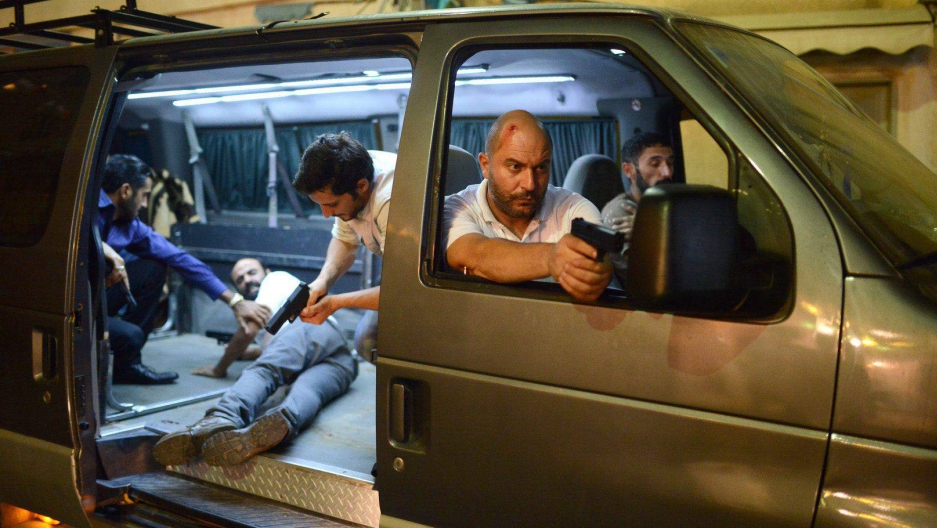 A scene from the hit Israeli TV show "Fouda."

The opening credits to Fauda are thrilling on their own: high energy music with a Middle Eastern twist, scenes of guys with big guns, beautiful women, sex and death. It’s no wonder people are hooked.

The Israeli action-thriller is the source of much excitement in Israel — and in Palestine. Fauda, meaning ‘chaos’ in Arabic, follows an elite undercover Israeli army unit operating in Palestinian society to catch one key militant member of Hamas. It sounds like a typical action series but for the region, the show is ground-breaking: It’s mostly in Arabic with Hebrew subtitles, and it shows the Israeli-Palestinian conflict in a way that makes people from all sides want to keep watching.

But no one could have predicted how popular the show would become — not even one of its creators: Avi Issacharoff. “Every media outlet, every taxi driver, every family on Friday nights was sitting and discussing Fauda, Fauda, Fauda,” Issacharoff says, looking bewildered. “I don't get this!﻿ I mean, people didn't want to hear about Palestinians, people didn't want to hear about the conflict, it was the most un-sexiest issue in the world for the Israelis.”

Issacharoff should know. He covered the conflict for 15 years as a journalist and reported on countless military operations, some like the ones portrayed in the show. He’s fluent in Arabic, and has strong connections in Gaza and the West Bank, where the fiction-based-in-reality of Fauda is centered. He expected the show to get criticism from leftists for being too racist and from right-wingers for being too soft on Palestinians. Instead, the show has received critical acclaim like none other: it is one of Israel’s highest rated TV shows ever. To him, he says, making the show is a dream come true. And now, the show has been picked up for an international audience by Netflix. The company also bought the rights to the second season.

That price is certainly something Mohammad Abumazen is aware of. The 26-year-old Palestinian lives in Ramallah, in the West Bank. For him, the conflict, tension and violence are all around.

He had never seen Fauda, but when I told him about the show, he knew exactly what it was about and he was curious. We decided to watch it together.

Fidgeting with excitement, Mohammad would shift from the edge of the couch, lean back, and skootch up to the edge again to get closer to the laptop screen. We blew through four episodes in one sitting.

Afterwards, I asked him: What do you think about a show like this that’s Israeli made?

“Wait, it's Israeli? It's not Palestinian?” He's stunned. 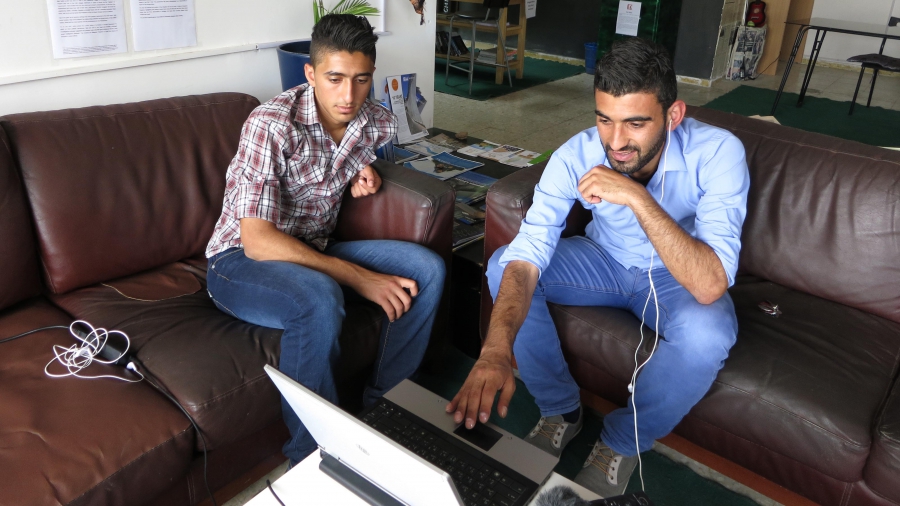 Mohammad (r) watches Fauda on a computer with his cousin at the youth hostel in Ramallah where they both work.

He says he has never seen anything like it on Israeli TV, “Because they were focusing on showing the world that we are terrorists, we are, like, carrying the guns [and] the weapons,” he explains.

Fauda, Mohammad says, makes you care about the Palestinians: You see innocent people getting killed, like a young groom who gets shot on his wedding night in a failed sting to catch his brother — a suspected terrorist. The scene was intense and heart-wrenching, as the newly widowed bride shrieked with horror. She later went on to blow up an Israeli bar. Those scenes, he says, are pretty true to reality.

Even more interesting to Mohammad is that he’s used to seeing Israelis portrayed on TV as unconditional heroes — but that’s not the case in Fauda. “Like, a wife cheating on her husband,” he recalls – a depiction that really surprised Mohammad, given it was the main character’s wife who was being unfaithful. “[I also saw] a soldier, he's fighting not because of Israel but because this is his duty or something. It’s like a job for them.”

“It's something really not as I expected. Really, it changed many things in my mind towards the Israelis and the way they are thinking,” he adds.

Seeing the unexpected — it seems Israeli viewers are drawn to Fauda for similar reasons. You can sympathize with pretty much everyone. Avi, an Israeli businessman living in Jaffa, was hooked by the first episode. “The first time I saw that it was not one dimensional and just that the Israelis are right or the Palestinians are right and you saw the conflict on both sides and you saw that both sides are like persons,” he says excitedly. “It was important and nice for me to see it. It's balanced.”

Vanessa, who works with an NGO that promotes peace through education, would sit with her kids each Sunday hungering for the latest developments. For them, the show was eye-opening. “I never understood the intensity of it and the danger of it ... and how similar we all are,” she says.

Issacharoff says he isn’t naïve: He doesn’t think a TV show can be the key to peace in the region or anything. But at the very least, Israelis and Palestinians might realize that the people they’ve labeled “the enemy” for so long aren’t so different, after all.