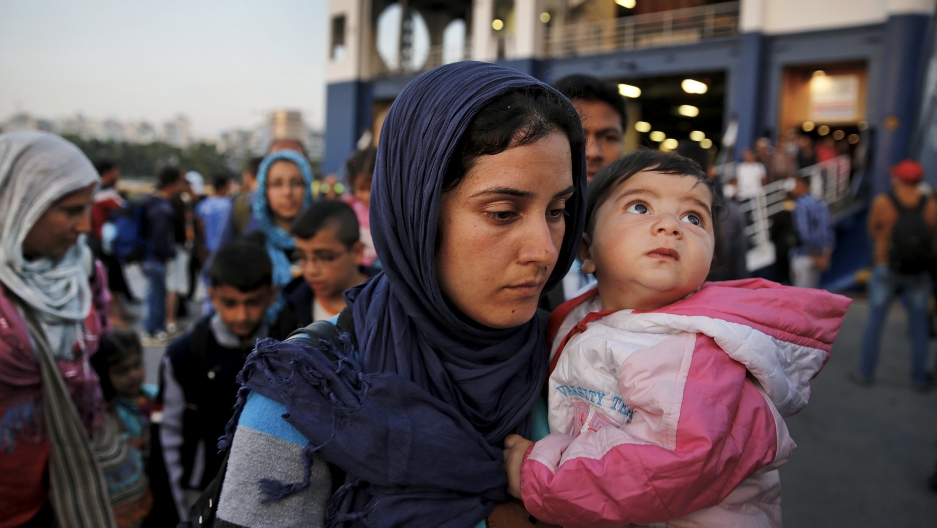 Syrian refugees disembarked from a Greek ferry near Athens on June 14, 2015. Over 1,800 predominantly Syrian refugees and other immigrants who crossed the sea from the Turkish coast to the Greek island of Lesbos were ferried to Athens after the Greek authorities supplied them with temporary documents.

Every day, hundreds of refugees from North Africa and the Middle East are taking a 40-minute boat ride in inflatable rafts from Turkey to the vacation island paradise of Lesbos.

Lesbos is in the Aegean Sea and it is the third largest of the Greek islands. Authorities there say they are overwhelmed by huge numbers of migrants coming ashore. So far this month, around 4,500 have made the trip. The population of Lesbos is only about 86,000.

The boat trip is relatively short, but expensive. Smugglers are said to charge about $1000 per person. And safe passage is far from guaranteed. The refugees must first evade Turkish coast guard ships to get across the waterway. Smugglers tell them to slash their rafts once they arrive on shore so they can’t be sent back by boat to where they came from.

At one beach on the northern shore of Lesbos, waves rolled over dozens of black, deflated rafts. Colorful life vests in adult and children’s sizes were scattered along the rocks. On Wednesday morning, the BBC’s Anna Holligan watched a boat arrive full of refugees at that spot.

“We saw 45 people come ashore,” Holligan says. “They scrambled over the rocks, the women and children and the babies first, and then, the men.”

Holligan says the children she saw were soaking wet. The inflatable rafts they had used were built to hold a maximum of just 15 passengers. The smugglers were sure to retrieve the engines from the rafts for future use.

Many of the refugees Holligan spoke with on Lesbos had originally come from the Syrian city of Aleppo, where fierce fighting continues to rage between government forces and a host of rebel groups. But some had come from as far away as Afghanistan and Pakistan. So many desperate people have arrived that authorities opened a new refugee camp to accommodate them.

It is nearly a 40-mile walk from this particular beach to the refugee camp and refugees usually have to make the trip by foot. Tourists who have picked up refugee families in their cars have been told not to and some have even been arrested for doing so, Holligan says.

People arriving on the beach have received no official assistance, only some food and water handed out by local volunteers. The newly arrived refugees are now in camps waiting for Greek authorities to process their paperwork. Most of them are hoping to travel to other parts of Europe.

The Greek financial crisis has not spared the refugees either. “Many of these people have sold their homes, sold their cars, and they do have money in the banks. But,” Holligan says, “the banks are closed because of the financial crisis. So, they can’t access their cash.

Tourists on holiday in Lesbos — this is near the peak of the summer holiday season — are also seeing the effects of the refugee crisis: