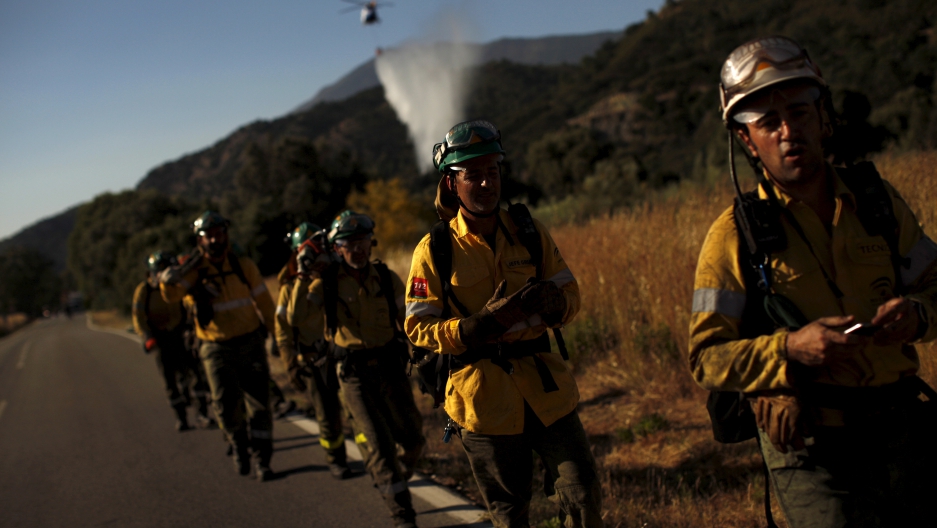 A helicopter drops water over a wildfire as firefighters walk along a road after extinguishing it in Benahavis, southern Spain, May 19, 2015

Wildfires in Canada have gotten a lot of attention this week — but fires are burning not just in Canada.

That means it's been a busy season for Paul Lane, vice president of Air Spray Airtankers, a company that deploys firefighting aircraft. "It's an exceptional season this year," Lane says.

Northern Spain and Portugal are also feeling the heat. Flames broke out Saturday in the northeastern Aragon region of Spain, near Madrid, and continued to rage through the weekend. Firefighting equipment, aircraft and more than 500 firefighters battled the blaze. At least 1,350 residents were evacuated to nearby villages. As of Sunday, The Spanish Ministry of Agriculture and Environment said the fire had already consumed 8,000 hectares of forest.

To the east, in the region of Catalonia, wildfires broke out north of Barcelona in Cardedeu. The Catalonia fire department said several cars and two homes were destroyed, but reported no injuries.

To the west, in Portugal, another fire broke out on Saturday in Alcobertas, north of Lisbon. Almost 100 firefighters fought the flames that raged through a forest there.

Spain's meteorological agency predicts the heat wave that has led to the current tinderbox on the Iberian Peninsula will continue for at least another week.