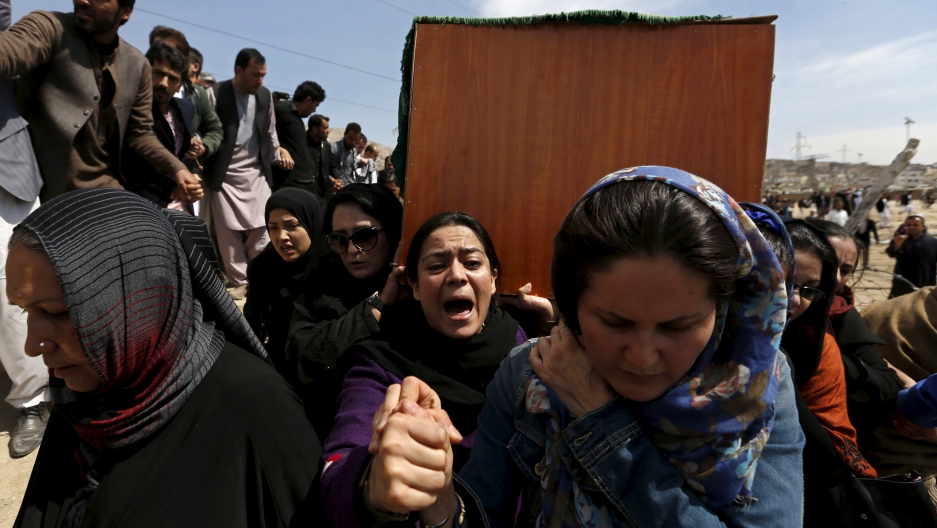 Afghan women's rights activists carry the coffin of Farkhunda, an Afghan woman who was beaten to death and set alight on fire on Thursday, during her burial ceremony in Kabul March 22, 2015.

Orzala Ashraf Nemat is the kind of person who prefers visiting shops and her local market on foot. But in her home town of Kabul, that is not always a safe option, particularly for women walking alone.

That fact was illustrated in March, when Farkhunda Malikzada, a young female Islamic theology student in Kabul, was murdered in public. Farkhunda was falsely accused of burning a copy of the Koran by an amulet seller at a local shrine. Overhearing the argument, a mob of male bystanders stoned Farkhunda to death, ran over her body with a car and set it on fire.

"After the Farkhunda incident, I really didn't feel confident or comfortable going anywhere, walking anywhere, alone, the way I was doing before", she says.

The murder sparked outrage around the world, and led to public protests by Afghan women. Four men were eventually sentenced to death for the killing, based on video evidence of their invovlement.

This week, however, the Afghan court system issed a surprise announcement: The sentences in the case had been revised in a closed hearing, and the death sentences in particular would be commuted to jail terms. No reason was given, but to Afghan women's rights activists like Orzala, the news has come as a betrayal of the government's promise to take women's rights seriously.

That network of support, she believes, allowed them to put pressure on the justice system, which still was vulnerable to corruption and intimidation.

"When you have a society or a country in which there are powerful people, and their power goes beyond the government, this is what happens," she says. She remembers politicians visited the court with armed body guards — a deliberate show of power over the justice system, according to Orzala: "It's to show they can do anything".

For women in Kabul's public spaces, Farkhunda's murder added a new element of fear to everyday life, in addition to the threat of suicide bombings and gun attacks. "What Farkhunda's case added is this sense of not feeling secure from people just next to you," Orzala says. "You can imagine they can just turn against you, and be as violent as you can imagine."