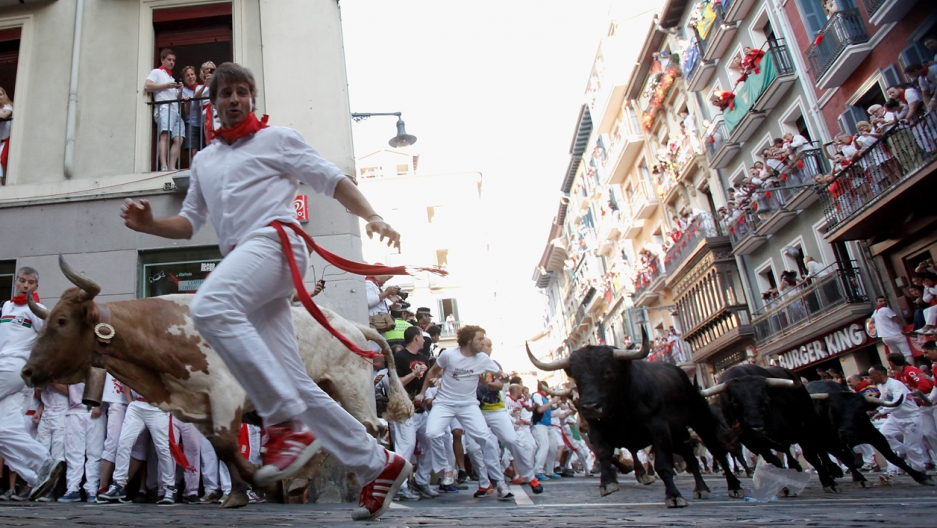 Revelers run with bulls at Curva Estafeta during the third day of the San Fermin Running Of The Bulls festival, on July 8, 2013 in Pamplona, Spain.
Credit: Pablo Blazquez Dominguez
Share

Ernest Hemingway likely had no idea what he was starting when he glorified the Spanish tradition of bull running in "The Sun Also Rises."

“Nobody ever lives their life all the way up except bull-fighters,” says Jake Barnes, Hemingway’s desperately insecure protagonist.

Today, more and more foreigners are taking Barnes' thoughts to heart and flocking to Pamplona, Spain to experience bull running themselves.

Last year, more than 17,000 people participated in the runs; 56 percent were from countries other than Spain, according to Pamplona city hall.

The United States, Australia, New Zealand and Britain provided the largest numbers of foreign bull runners. In these countries in particular, running with bulls is a YOLO-justified risk.

While the excitement appeals to many, the thrills come at a cost: hundreds of people are hurt in the runs every year, and fifteen people have been killed during them since 1910.

Many of the injured are the tourists who come to Spain to show their toughness.

In 1995, 22-year-old Matthew Peter Tassio from Glen Ellyn, Illinois was killed when he was gored by a bull in the town hall square of Pamplona.

Just on Tuesday, two Americans and a British man were gored by the running bulls in the streets of Pamplona. Three other Americans were lightly injured by the jostling crowds.

“It’s a macho thing. [At the end] you’re standing around counting your parts,” one American who had run with the bulls three times told the Chicago Tribune. “It’s like jumping out of an airplane.”

Festival officials say that too often the tourists participate with little knowledge of the dangers and insufficient training, not to mention on little sleep and hungover. That leaves them ill-prepared to outrun six bulls charging over the narrow half-mile route at an average of fifteen miles an hour.

After Tassio's death, Spanish television and radio talk shows held debates about whether foreigners should be allowed to participate in bull running at all.

"Europeans and Spaniards see the running as a show or spectacle like bullfights and leave the performance to the professionals," Daniel Ross, the US vice consul in Bilbao, told The New York Times. "Americans come here with the image of 'The Sun Also Rises' and just don't realize how dangerous it is and how easy it is to trip up."