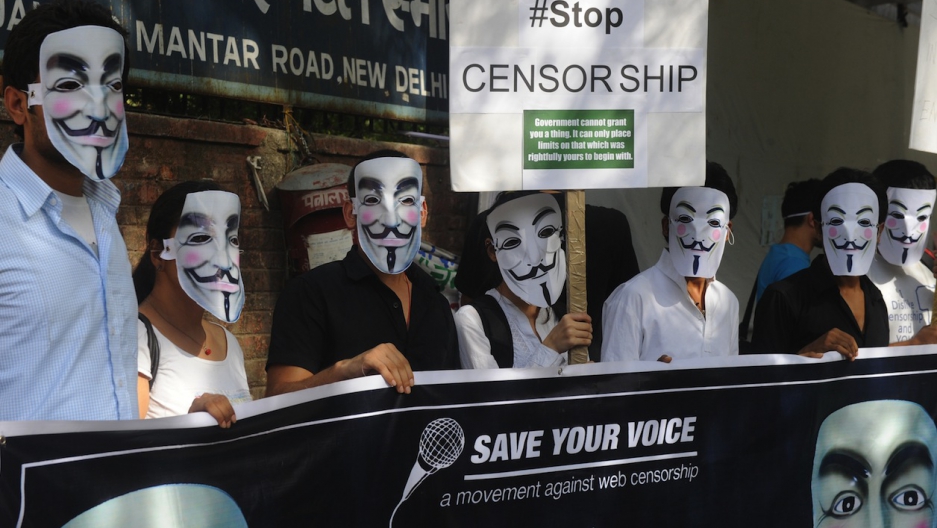 From TV to the internet, censorship is everywhere in India—and growing.
Credit: RAVEENDRAN
Share

But in the last year under a Hindu nationalist government, self-censorship on TV has veered into the absurd, with a notable broadening of what’s considered “naughty” to say or see. Now just about anything is at risk of being bleeped, muted, or cut. From Ashley Judd’s cheerleading in "Someone Like You" to blurred alcohol labels on MasterChef Australia to the word “beef” in a rerun of Friends, networks terrified of being taken off the air are going to extreme lengths to sanitize shows. Every third word in Justin Bieber's Comedy Central roast was bleeped.

It’s gotten to the point that when the 60-minute season finale of Game of Thrones aired in India this June, it was halved.

The list of no-no words on English-language television has broadened from a list of mild curses (“damn,” “ass,” “hell”) to include “condom,” “sex,” “ballsy,” and “butt.” Subtitles say “go to inferno” or “beat the jerk out of me.” Viewers are left to scratch their heads at what words might have gone missing. Did he just say “what a harlot”? Did she just call her nemesis “my witch”? “Effin’” becomes “smokin,” and “butt,” in one memorable instance, became “boat.”

India has 125 million English speakers, and many in urban India follow American shows and watch Hollywood movies. The 18 English entertainment channels offer shows currently on air as well as popular re-runs like Seinfeld and Friends. Those who have been watching these shows for the last decade would have noticed a significant tightening of "moral regulations" over time — like the word "cows" being muted when Phoebe talked about her pregnancy cravings for beef.

What is baffling is that an active censor board is not even at play here. All channels airing in India choose to self-censor, to avoid the dire repercussions of over-stepping the line and receiving a complaint about the content. In the past, channels have suffered millions of rupees in losses after being taken off the air for days because of topless models, MTV reality shows or even stand-up routines on Comedy Central.

Self-censorship guidelines were issued by the Indian Broadcasting Foundation, a self-regulating professional organization, in 2011. It is mandatory for every channel in India to give viewers information on filing a complaint about the content — and repeat it every 30 minutes. A 13-member Broadcasting Content Complaints Council, comprised of a retired Supreme Court judge and representatives from national commissions and the broadcasting industry, reviews the complaints before any action is taken.

Ashish Sinha, the secretary general of the council, is convinced that the guidelines have done more good than harm. “I can tell you with all the authority in my command that over the years, the nature of content has changed, and changed for the good. It has become much more positive,” he said. ​Channels that run afoul of the guidelines are warned first, he stressed, before receiving more serious punishments, such as fines and reports to the Information and Broadcast Ministry, which has the power to take a channel off the air. Last November, Comedy Central was taken off the air for six days for content with “vulgar” language that threatened “public morality or morals.”

However, there seemed to be no need to censor "cows" until last year, which also happened to be when a Hindu nationalist government came to power. Though the guidelines do have some absurd demands — the content should not “encourage the possession of wildlife as trophies,” for example — many of the restrictions seem lenient compared to the levels of censorship channels self-impose. Programs which children may or may not view, according to the time they are aired, are categorized separately; even the daytime shows are only asked not to show “highly coarse language with explicit sexual connotations” and “excessively explicit or gruesome crime or violence.”

Somehow, the networks interpret this to mean you can’t say “butt.”

Each channel has a standards and practices team, which assures that all guidelines are followed. They also have to keep the government's program code in mind, issued under the government’s 1994 Cable Television Network Rules. (Because these are government rules, the punishments can be much harsher.)

The mishmash of rules and an escalating climate of sensitivity in India have led to a stifling of popular culture. In the '90s, TV was relatively freewheeling, but under 2015's censorious regime, there are always new offenses that the public needs to be protected from—whether it's the human anatomy, the English language, or Ashley Judd’s split-jumps.