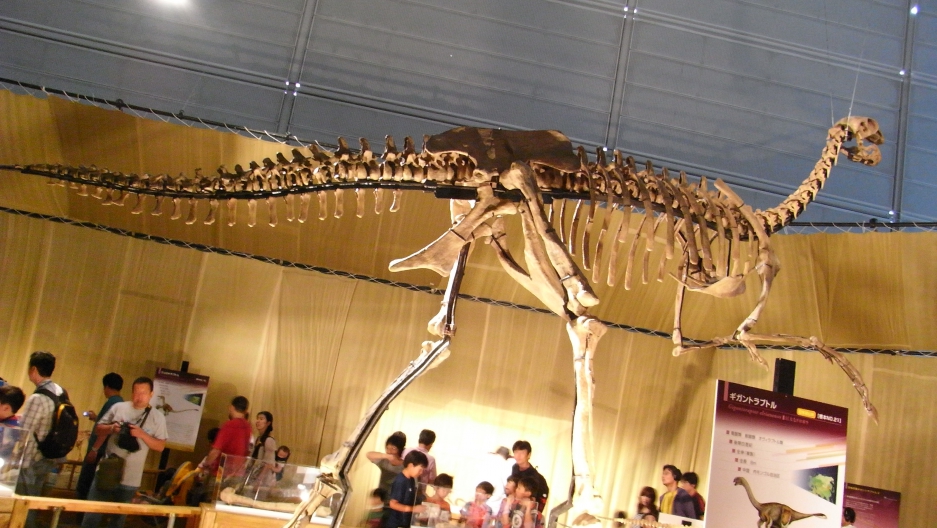 The story of how dinosaurs got their names is a great piece of history.

Everybody likes a good dinosaur story, but one of the best dinosaur stories of them all centers on the man who gave these remarkably extinct beasts their name.

Sir Richard Owen (1804-1892) was a celebrated naturalist and founder of the British Museum of Natural History. Some time around 1839, Owen began studying the bony remains of extinct races of reptiles: the carnivorous Megalosaurus, the herbivorous Iguanodon and the armored Hylaeosaurus.

To name these creatures, Owen compounded two Greek words: δεινός(deinós), which means horrible or fearful, and σαῦρος (saûros), or lizard. The result was dinosaurian or dinosaurs. For Owen, the reptiles were “terrible” or “terribly fearful,” a term which still holds great resonance even when staring at their long since petrified skeletons within the safe confines of a 21st century museum.

The word dinosaur made its literary debut in a long monograph Owen wrote called “Report on British Reptiles, Part II,” for an 1841 issue of the Report of the British Association for the Advancement of Science. In 1873, the term appeared again in The Story of Earth and Man, a popular natural history text by J.W. Dawson. Following more and more unearthing of these creatures’ remains, the use of “dinosaur” grew more entrenched in both the fossil record and our popular imaginations.

The Oxford English Dictionary also describes the origin of the slang use of dinosaur, which refers to someone or something that has failed to adapt to a new environment or circumstances. The O.E.D. notes that the term used in that sense first appeared in the Manchester Guardian (now known as The Guardian) on April 3, 1952. This reference is actually incorrect, however: The article, written by the famed British journalist Alistair Cooke, instead appeared in the newspaper on March 31, 1952. What’s more, the word was used in a quote from a speech by Harry Truman at the Jefferson-Jackson Day Dinner in Washington D.C. on March 29, 1952.

Criticizing the G.O.P., Truman railed: “This is the kind of dinosaur school of Republican strategy. They want to go back to prehistoric times ... this ... would only get the dinosaur vote — and there are not many of them left, except over at the Smithsonian.”

Regardless of its origins, it is never a compliment to be called a dinosaur by a younger colleague or relative.

But let’s get back to the creator of the word dinosaur, Owen. Although a contemporary of Charles Darwin (1809-1882), the influential Owen was a loud critic of Darwin’s transformative book, On the Origin of Species.

Owen is credited by many science historians with writing a devastatingly snarky — and anonymous — review of Darwin’s scientific masterpiece. The scathing essay appeared in the April 1860 issue of the venerable Edinburgh Review. Although Owen did believe in evolution of a sort, he found Darwin’s explanation to be simplistic and incomplete.

Owen also took Darwin to task for not respecting the views of “creationists” and making them look one-dimensional and naïve. Initially, the review gravely hurt Darwin’s psyche as he worried about its impact on his scholarly reputation. But with time, success and more reproducible scientific evidence, Darwin’s career soared.

The two never stopped bickering. And Owen was also involved in controversies with many other colleagues. For instance, several researchers accused him of claiming their scientific discoveries as his own.

Britain honored the great Darwin by erecting his statue in a place of pride in the marble and brick cathedral that serves as the British Museum of Natural History in South Kensington, London. Owen, who did not die until a decade later, was forced to view the statue every morning as he climbed the grand staircase to his office. Owen’s statue replaced Darwin’s position in 1927 (with the Darwin piece being shunted aside to a secondary room). But as The Atlantic Monthly reported in 2009, on the occasion of the bicentennial of his birth and the 150th birthday of the publication of On the Origin of Species, Darwin was rightfully restored to the main landing of the grand staircase.

In the end, of course, it is Darwin whom we remember, while Owen has been relegated to the so-called dustbin of history. Owen may have “invented” the dinosaur and even dominated the conduct of the world famous British Museum of Natural History, but it was Darwin who changed the world. Which begs the question: Who’s the dinosaur now?