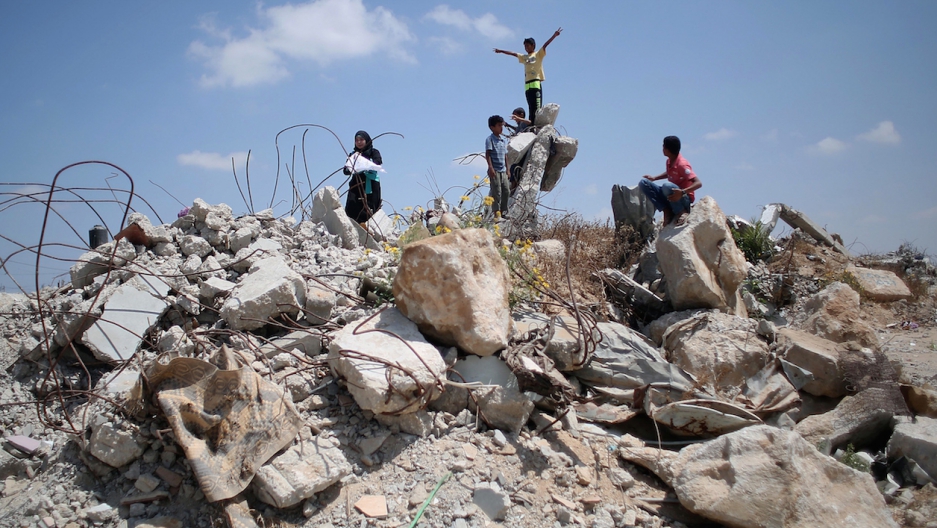 Palestinian children play in the rubble of houses in the Gaza Strip destroyed during the 50-day war between Israel and Hamas militants. July 7, 2015.
Credit: SAID KHATIB
Share

GAZA CITY, Gaza Strip — “Out of my five daughters, the only one uninjured in the war was Nada, and now she doesn’t talk,” a mother in Gaza says of her young child. “She cries a lot. She is exhausted all the time, suffers nightmares."

For Gaza’s children, last year’s war with Israel wasn’t just a horrific summer of violence. It was the third conflict here children 7 and older have seen in their short lives.

They live with the effects every day.

Seven out of 10 children in the hardest hit areas of the Gaza Strip experience nightmares, according to a new Save the Children report. Three-quarters of them regularly wet their beds — a common issue for children that trauma can make worse. In al-Shoka, a neighborhood in the southern part of the Strip, half of the children interviewed wet the bed every night.

Save the Children collected data in April and May looking at the mental health of children ages 6 to 15. They found that those living in the hardest hit areas showed “unexpectedly high levels of continued severe emotional distress and trauma.”

Some children now say they are afraid to leave their homes; others feel unsafe in school buildings. Some who moved to new areas after their homes were bombed say they feel too anxious to try to make friends in their new schools.

More from GlobalPost: Growing up in Gaza

At the start of the academic year, schools across Gaza spent the first few weeks providing psychosocial support to students who had endured 51 days of bombing. They were also learning to cope with the empty desks in their classrooms and deaths in their families.

Save the Children figures say 551 Gazan children were killed in the fighting, and 3,436 injured. Around 10 percent of the injured will be disabled for the rest of their lives. An estimated 1,500 lost parents.

One hundred thousand people remain homeless in Gaza. Significant reconstruction of health facilities, water networks and schools has not yet started because of the ongoing blockade, which restricts access to materials, and funding shortfalls.

For many children in Gaza, the war never ended. They continue to experience it “in their nightmares, their games, silently, in quiet corners, in their memories,” the report said.

Many young people saw things that would be hard for even seasoned adults to recover from.

“My children were in the street [during the war] and saw the body pieces on the street after a shelling. My son is now traumatized, and my daughter has nightmares and wakes up frightened. I don’t know how to help them,” one mother told Save the Children.

In some areas children still play atop rubble that hasn’t been cleared. Parents say their games are often violent and reflect scenes from wars they have seen. A particularly popular one is “Israelis and Palestinians” — which is a lot like “Cowboys and Indians” of the 1950s United States.

Even during peaceful times, the specter of bombardment lurks close by.

Drones and F-16s buzz overhead — children can tell you the difference between the sounds — and the Israeli security forces frequently shoot into border areas.

More than 70 percent of the children interviewed said they are afraid there will be another war.

Some reported feeling trapped, unable to escape. “Our future is gone,” one 14-year-old said.

More from GlobalPost: The situation in Gaza is so desperate that some are predicting another war