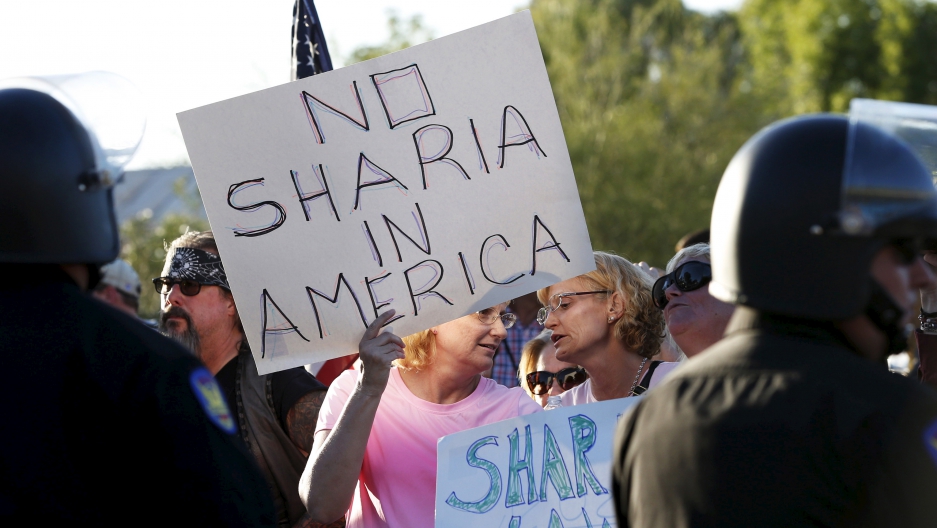 Anti-Muslim protesters at a rally in Phoenix, Arizona on May 29, 2015 pointed to Islamic sharia law as a problem for the United States. The sentiment is said to be a driving force behind failed legislation in Texas to ban foreign laws in American courts.

Roadside signs with quotes from scripture alongside Texas Highway 71 are a reminder that this is God’s country. And to most folks in these parts, that would be a Christian God.

But Muslims might be the fastest growing religious group in Texas. Islam is the largest non-Christian denomination in the state. The US Religious Census in 2010 estimated that 422,000 Muslims call Texas home. That’s more than any other state in the union.

And for some, that’s a problem.

Early this year, the Texas state house in Austin hosted its 7th annual Texas Muslim Capitol Day. It’s an opportunity for Texas Muslims to visit state government headquarters. A small but vocal group of protesters showed up. One of them even commandeered the podium during the day’s proceedings.

“I proclaim the name of the Lord Jesus Christ over the capitol of Texas! I stand against Islam and the false prophet Mohammed!” a woman shouted into the microphone. “Islam will never dominate the United States and by the grace of God it will not dominate Texas!”

Inside the capitol building, Texas state representative Molly White made national news after she had an Israeli flag draped over her desk and then told staff to ask any Muslims visiting her office to denounce terrorism and pledge allegiance to the US.

But Texas Tea Party activist, JoAnn Fleming says she supported the bills because they would have helped put a stop to creeping Islamic sharia law.

“We do see it creeping into communities across Texas and we just believe that it’s important for people to understand that when you come to our country, you need to be under our rule of law,” Fleming says.

“Frankly, if you don’t like that, then this might not be the right place for you,” Fleming adds.

Fleming says she is particularly concerned about the impact of sharia law on women. “As an American woman, as a citizen, I do not agree with the tenets of sharia law. I do not want it used in our courts against any women,” she says.

Mona Kafeel would probably agree with that statement. She’s with a group called the Texas Muslim Women’s Foundation, based in the Dallas suburb of Plano. Among other things, the group runs a shelter for women suffering from domestic violence. Kafeel says there is a lot of confusion about sharia law in the US.

Religion can be a problem when it comes to the mistreatment of women, Kafeel adds. But she says it can happen with any religion.

“Men who need power will abuse women on the basis of religion. I’ve heard so many stories of pastors’ wives. They will quote [scripture],” Kafeel says.

“[Imams] understand the law. They understand the text [of scripture]. They’re not misinterpreting it,” she says. “They work with women to understand what the issues are and how to solve them.”

When her husband became unfaithful and abusive, Alia Salem says she got help from her local imam to seek advice about getting a divorce. Salem is the director of the Dallas-Fort Worth chapter of the Council on American-Islamic Relations. 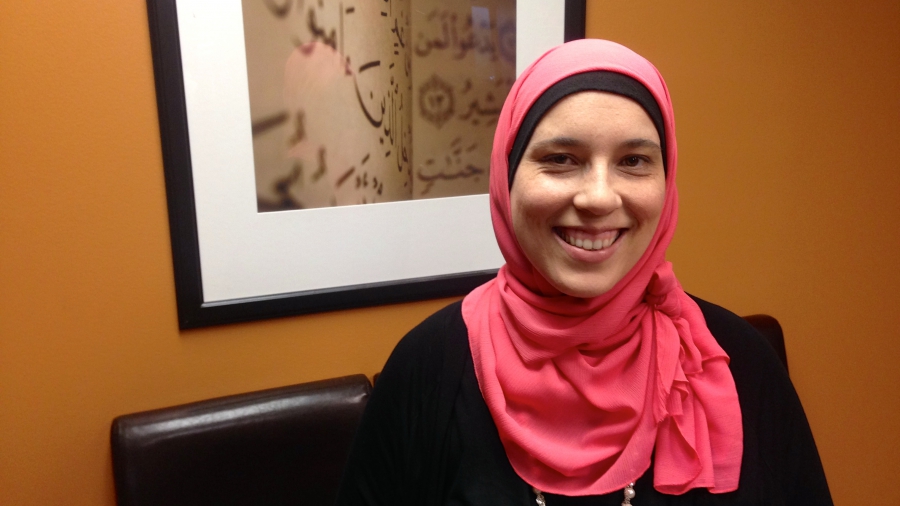 When Alia Salem made the difficult decision to seek a divorce, she says she got help from her imam.

“I approached my imam and I told him, I said, ‘I’m ready,’ Salem says. After some discussion, Salem says the imam asked her to write a letter to a religious court.

In this case, the court is a panel of religious leaders that help Muslims settle personal or business matters on a voluntary basis. Salem says the court’s ruling was all about finding religious meaning during a difficult time in her life.

The process with her imam and the religious court took about three weeks, Salem says. Going through the legal process of getting a divorce took about six months. These were two separate tracks, Salem says. The religious tribunal’s input had no legal standing, but she adds that it did help speed things along.

“When I went to my attorney and filed for divorce in the court system, I presented [the religious court ruling] – because it’s a notarized document,” Salem says. “[The attorney] said, ‘This is fantastic. I can use this as supporting evidence for an uncontested divorce.’”

Had it actually passed, this is the kind of thing the proposed legislation in the Texas state house might have halted. Any reference to foreign laws in Texas family courts would have been banned. Several states have passed similar laws. But legally speaking, many experts say they don’t do much of anything. And they might be unconstitutional.

Bee Moorehead is with an Austin-based interfaith group called Texas Impact. She says the legal ramification of the proposed foreign law ban was not the real issue.

“It’s specifically intended to hurt people’s feelings, to promote discrimination against one particular religious tradition. The spirit of it is anti-Muslim. That’s just not something we should be engaging in in this state,” Moorehead says.