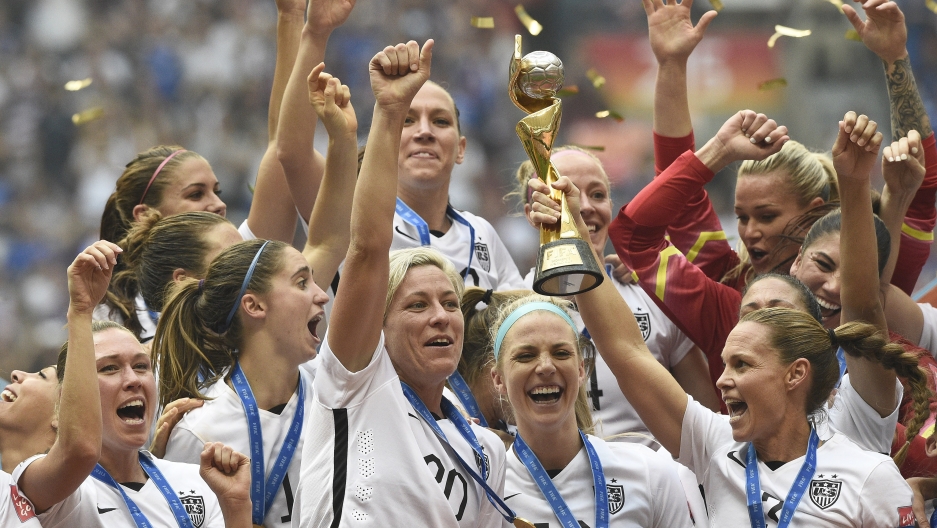 Carli Lloyd became the first woman to score a hattrick in a World Cup final as she inspired the United States to a 5-2 demolition of defending champions Japan on Sunday.

The United States, winners in 1991 and 1999, became the first nation to win the crown three times and avenged their loss to Japan on penalties in the 2011 final.

Lloyd, 32, scored her first goal after just three minutes on the pitch at Vancouver's BC Place Stadium with the second coming two minutes later, and her third after 16 minutes.

Lauren Holiday (14) and Tobin Heath (54) also found the net for the Stars and Stripes.

Yuki Ogimi got one back on 27 minutes for the Asian champions with their second coming thanks to a 52nd-minute own-goal by US defender Julie Johnson.

It was the third meeting between the two teams in a major championship with the Americans winning the Olympic gold ahead of Japan in 2012, when Lloyd scored both goals in a 2-1 win.

The stunned 'Nadeshiko' were in disarray just minutes into their title defence.

Wearing the captain's armband Lloyd, who was one of three US players to miss a penalty in the 2011 final, got the first two goals from set pieces as she delivered a performance that saw her presented with the Golden Ball award as the tournament's best player.

The 32-year-old picked up Megan Rapinoe's low cross from the right to tap in after three minutes.

Two minutes later the Japanese defence was in meltdown when Lloyd again found her way through following a freekick.

To euphoric chanting of 'USA, USA, USA' from the 53,341 fans in the packed stadium, Holiday got a third on 14 minutes with a volley after a weak defensive header from Azusa Iwashimizu.

And just two minutes later Lloyd completed her hattrick with a stunning shot from 50 yards over the head of a stunned Ayumi Kaihori in the Japan goal.

Japan's players huddled together to try and regroup, as they struggled to contain livewire midfielder Lloyd, who netted six goals in the tournament, equal with Germany's Celia Sasic.

But Houston Dash midfielder Lloyd raced forward again, looking surprised as she missed a chance for a fourth on 17 minutes as she fired just wide.

Ogimi lifted Japanese spirits in the 27th minute as she got one past Hope Solo -- whose work in the US goal earned her the Golden Glove award as top keeper of the tournament.

Japan coach Norio Sasaki brought on experienced midfielder Homare Sawa, the heroine of Japan's 2011 campaign, after 33 minutes in place of tearful Iwashimizu who had to be comforted on the bench.

Kozue Ando, who broke her ankle in Japan's opening game, and underwent surgery at home was back in Vancouver.

She was given a piggy back ride onto the field by reserve goalkeeper Erina Yamane at halftime.

But even her presence could not lift Japan, despite getting a goal back when Johnston inadvertently headed a cross into the back of her own net on 52 minutes.

Two minutes later Heath got her first goal of the tournament, as she picked up a cross from Morgan Brian following a corner.

Japan, nicknamed 'the Nadeshiko' - a pink flower symbolising grace and beauty - had won the 2011 crown in dramatic fashion in Frankfurt, Germany.

They became the first Asian side to win a World Cup with a victory that embodied the spirit of a nation struggling to recover from a devastating earthquake and tsunami.

The United States twice relinquished a one-goal lead before succumbing in a penalty shootout.