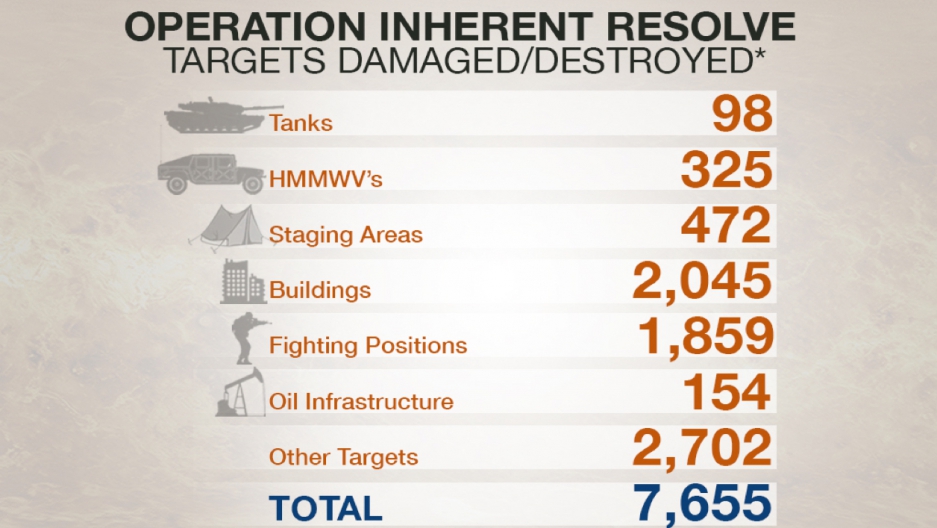 The Pentagon wants you to know it's blown up lots of things.
Credit: US Department of Defense
Share

Here's the latest from the US military's information war against the Islamic State: an infographic that tells a story about the conflict that the Pentagon probably didn't want to emphasize.

The US military wants you to know that it has blown up lots of things in Iraq and Syria. It doesn't mention how the Islamic State got all these things.

DoD News, the "official news" of the US Department of Defense's Press Office, tweeted the infographic Monday morning.

Ignore for a moment that the Pentagon has turned its military campaign against the Islamic State, which it calls "Operation Inherent Resolve," into a hashtag, and focus on the content.

In the past year, "Operation Inherent Resolve," which includes US coalition partners, has destroyed or damaged thousands of things, including buildings, staging areas, and fighting positions.

You'll also notice that the US military and its partner nations have destroyed 98 tanks and 325 HMMWV's — High Mobility Multi-purpose Wheeled Vehicles or Humvees.

Now this is where the Pentagon's infographic gets interesting. The infographic doesn't actually tell us much about the campaign against the Islamic State, except that 7,655 things have been blown up and that sounds like a lot. But these 98 tanks and 325 Humvees do tell a complicated story about the conflict — a story the Pentagon probably isn't trying to tell in the infographic.

While conquering territory in Iraq, the Islamic State also seized huge amounts of US-made vehicles, weapons, and munitions. Of these 98 tanks and 325 Humvees, then, it's practically certain that some of them, if not most of them, were US-made military hardware that might not even exist if the United States hadn't invaded Iraq in 2003. If their story is like that of most US military equipment that made its way into the hands of the Islamic State, some vehicles were probably provided directly to the Iraqi government either during the Iraq War or after. Some were probably left behind when the US occupation officially ended in 2011.

Some of the 325 Humvees, for example might have come from a huge cache of vehicles abandoned by Iraqi forces when the Islamic State overran Mosul in June 2014. Iraq Prime Minister Haider al-Abadi revealed the extent of the equipment losses in an interview last month. "In the collapse of Mosul, we lost a lot of weapons," he said on Iraqiya TV. "We lost 2,300 Humvees in Mosul alone."

(A few months after the fall of Mosul, the US State Department approved the sale to Iraq of 1,000 new humvees outfitted with .50 caliber machine guns and grenade launchers.)

It happened again in May 2015, when the Islamic State drove the Iraqi army out of Ramadi. Army Col. Steve Warren, a Pentagon spokesperson, admitted at the time that "some artillery pieces were left behind," as well as 100 wheeled vehicles and dozens of tracked vehicles, including "maybe half a dozen tanks."

So what does this Pentagon infographic tell you about #InherentResolve? While it's impossible to verify that any one of these 98 tanks and 325 Humvees was a US-made war machine, you can make a safe bet that some were. Which means the takeaway is this: the Pentagon is very busy blowing up war machines that it put there in the first place.