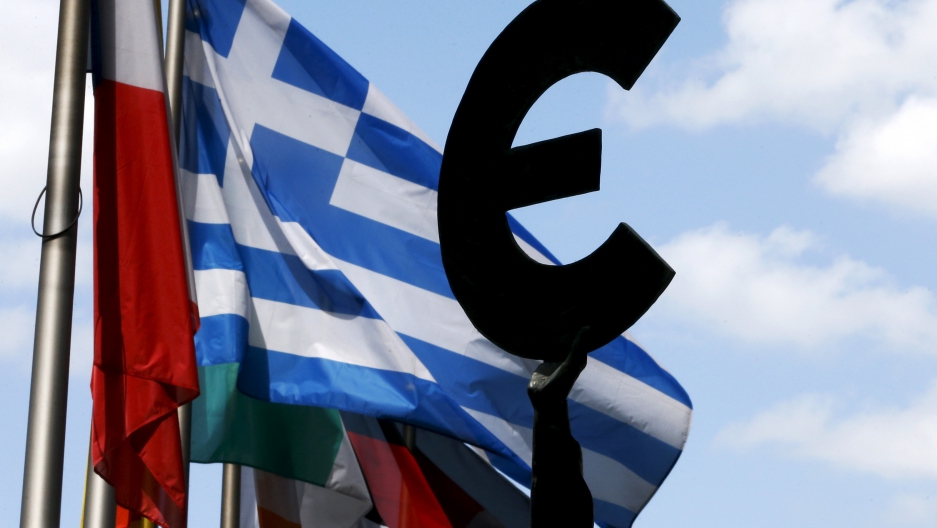 A Greek flag flies behind a statue depicting European unity outside the European Parliament ahead of a eurozone leaders summit on Greece in Brussels, Belgium, July 6, 2015.

Chaos is a Greek word — and it seems fitting today, with the Greek economy teetering on the brink of collapse.

Millions of Greek voters in Sunday’s referendum defiantly said "no" to more austerity — 61 percent, to be exact, as compared to 39 percent who voted in favor.

In other words, Greek voters rejected the terms of a proposed bailout designed to keep their country from financial collapse. “They’re very, very anxious. They’re very worried,” says Athens-based reporter Christos Michaelides about the mood of Greek voters, who are now facing an uncertain economic future.

Angst is a German word, meaning fear — and that’s an emotion felt right now in the heart of the eurozone.

Eric Jarosinski, a writer and former professor of German, has closely followed responses to the Greek crisis in the German media. “The referendum vote was being compared to a type of suicide,” he says.

German banks are among the most exposed to the Greek crisis, and German politicians have remained relatively firm in their unwillingness to renegotiate loans to Greece.

Still, it seems the Greek government is not yet giving up on negotiating a new debt deal with its mostly German creditors.

Neither are Greek voters, according to Michaelides. He says that although the No vote could be seen as a troubling rejection of a bailout plan, there’s another way to see the vote. “I have the feeling deep inside me that the majority of those who voted yesterday — and this might seem almost absurd — voted ‘No’ because they want to stay within the European Union and they want to send a message.”

He says No voters are betting on the government’s ability to successfully negotiate a new agreement that favors Greek interests.

It’s possible that Greece’s referendum on Sunday, which rejected the terms of European creditors, will worsen the country’s financial crisis and force the country to exit the eurozone.

Jarosinski, who was in Athens last week and is now in Berlin, runs the hugely popular Twitter account “Nein Quarterly,” where he wryly comments on German history and culture.

But he struck an uncharacteristically serious tone when discussing the Greek crisis. He says that in Germany, long-standing stereotypes of Greece have surfaced because of the crisis — especially the accusation that Greeks are irrational or irresponsible.

“I think that there’s a question about whether or not this is fair,” Jarosinski says. Some German politicians framed Greek’s debts as a moral issue. “That one pays back what one owes.”

Still, it’s difficult to summarize the diverse stances of the German public, given that thousands of Germans marched in support of a Greek ‘no’ vote. “There is no one German position,” he says.

Yet the German position that may carry the greatest weight, of course, is that of the country’s Chancellor Angela Merkel. She will meet with Greek leaders and eurozone officials in Brussels on Tuesday.

In advance of the talks, at least one leading German newspaper turned its attention away from Greece and toward Germany, says Jarosinski. “Their headline was simply addressed to Angela Merkel: What's next?"

And in that Germans and Greeks can all agree: No one knows.