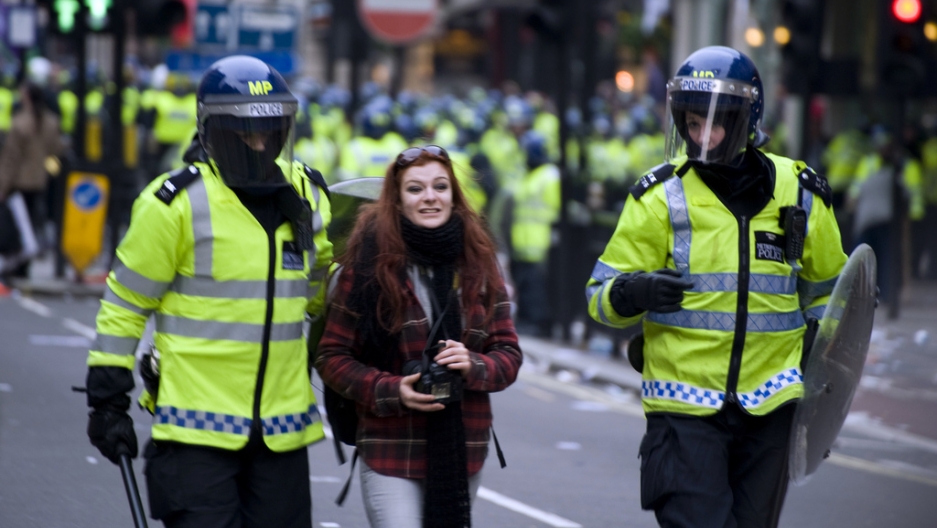 Metropolitan Police at 2011's March for the Alternative.

Anger and protests over police tactics and shootings have sparked a re-evaluation of the role, and structure, of policing in America. The national discussion continues, with new developments deepening it seemingly every week.

Reports continue to be released in an attempt to get an exact number of how many people have been shot and killed by police in recent years.

It’s a problem they don’t have in Manchester, England, where the number of deaths in the last 40 years is two. Sir Peter Fahy, the chief constable of the Greater Manchester Police, believes that the the number is the result of a radically different approach toward guns and mental health than we have in the United States.

“The whole way that we train officers is that the absolute last resort is to use your firearm," he says. "When you get into a situation, you assess the situation, you give yourself other options. And it starts from a position, always, that the best weapon is their mouth.”

The vast majority have to use their mouths, or at least not firearms, because only 209 of the 6,700 officers in Manchester’s force are armed. Fahy doesn’t believe that Manchester is particularly safe or small; it’s a busy English city with a population of 2.7 million people, dangerous situations and encounters happen every day.

Underlying these low numbers is a different perspective on the role of police and the types of situations in which police belong.

Strong mental health support, Fahy believes, is crucially missing in the United States, something that he notices when he’s just walking around.

“I am struck when I go to the US by the number of people on the sidewalk who clearly are suffering from mental health issues," he says. "And the trouble is that the police force are the outreach service that are dealing with them. Then they end up in situations where the person’s demeanor ends up getting them shot."

But it’s not simply a better way to deal with mental health that has resulted in Manchester’s success. Rather, underlying their entire system is an emphasis on community building. The force even introduced a new type of officer about 10 years ago, a 'police community support officer.' These police have no power, but rather simply go to communities to build relationship, which Fahy believes is at the very foundation of what policing should be.

“Often you find that the people you're coming into contact with — some of the criminals, particularly some of the people with mental health issues, they’re often very well known by the local officers,” Fahy notes. “That local knowledge is really important. It’s putting into place a whole structure and system that is very much based on understanding ... not by some other set of targets or some other particularly priority which is not important to that community,” perhaps referring to the system of quotas that exists in many US policing districts.

This is not to say that Manchester — or England as a whole — doesn’t have its fair share of problems, particularly with race. In 2011, major protests followed the shooting of a black teenager in London. But the proactive community approach seems to be helping.

“I think by the form of neighborhood policing that we use, we can be very active in dealing with community tension,” says Fahy, noting that tensions with the Muslim community are especially high. “Being proactive gives you a chance, but I wouldn’t want to say that the British police has had huge amount more success [than the US].”

In addition to lacking mental health support, Fahy believes community relations need to be improved. Even though there are more African American officers in the US than black officers in the UK, Fahy argues, “local people still feel that the badge is symbol of an unfair system,” something that transcends whether an officer is black or white.

“So for the police to be successful on issues like race,” Fahy continues, “you need a population that feels like they’re getting a fair chance and that the system is fair to them. And I think those are the issues that we’ve made some progress on.”

Of course, the UK’s approach exists within the context of a public that is much less attached to guns, or at least in a country with stricter gun laws, which Fahy acknowledges. But rather than trying to change a culture, simple reforms could change the types of situations that American officers face.

“Realistically, you’re not going to change the gun culture in the US. But it’s more about the way police officers have to deal with incidents where people may be carrying weapons, and there should be other ways of dealing with that, other than shooting them dead.”