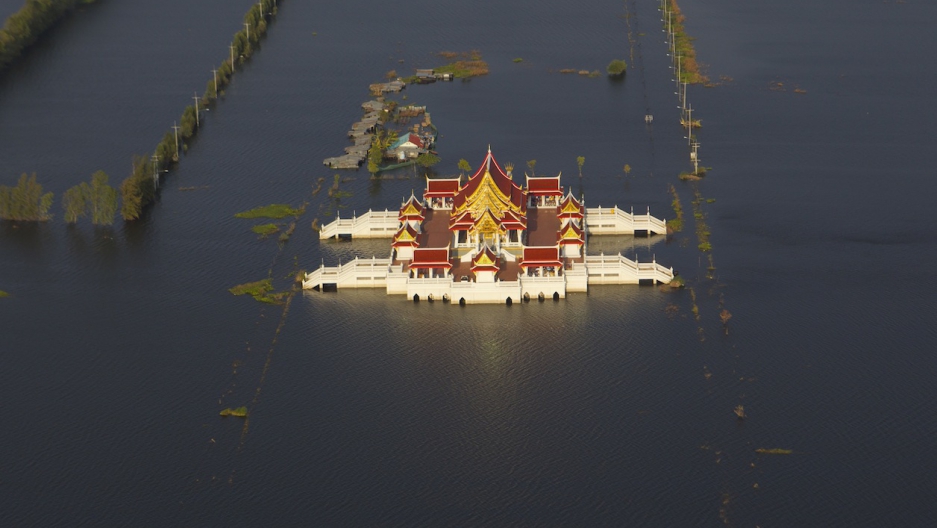 Editor's note: a previous version of this story misstated the portion of Thailand's GDP that a seawall for Bangkok would cost. It's nearly 1 percent, not half, of the country's GDP. It also misstated the rate of sinking. It is roughly 2 cm (.8 inches) per year in parts of the city, not 4 inches.

BANGKOK — Thailand’s capital is both glitzy and gritty, a city of glass towers and cement hovels teeming with nearly 10 million people.

All that steel and concrete and humanity sits on what was once marshland. The ground beneath is spongy and moist. Imagine a brick resting on top of a birthday cake. That’s Bangkok — and it’s sinking into the Earth at an alarming rate.

Thailand’s disaster specialists have been warning of this coming calamity for years. One expert has said he’s “worried about Bangkok resembling Atlantis.” Another previously told GlobalPost that the city will be under five feet of water by 2030.

The latest estimates suggest that Bangkok is now sinking as fast as 2 centimeters per year in parts of the city.

The predictions for 2100 are even more dire. By then, Bangkok will be fully submerged and unlivable.

Like global warming, which will accelerate the city’s submersion by raising the sea level, Bangkok’s sinking woes are repeatedly shrugged off. Thailand’s military and civilian rulers alike tend to obsess over immediate concerns (namely power, prestige and money) and keep punting the problem along.

But the monsoon season, currently underway, tends to bring this crisis to mind.

A nasty storm can suddenly turn Bangkok’s streets into gushing streams. Sewers overflow, taxis churn through fetid water and, occasionally, kids can scoop up displaced fish wriggling above the asphalt. Four years ago, during a particularly severe flood, GlobalPost found families in neck-deep waters on their second-story balconies.

Anond Snidvongs, director of the Southeast Asia Regional Research Center, predicts the city’s outskirts will be the first to go. Parts of the shoreline beyond Bangkok are already lined with pumps that grunt noisily and purge invading seawater. They don’t always work. During heavy rains, saltwater flows in the streets.

Bangkok is swallowed up a little more each day. Experts tend to offer two solutions.

The first is to erect a massive seawall that could cost nearly $3 billion — nearly 1 percent of Thailand’s current GDP.

The second option? Giving up entirely and moving the capital to higher ground.