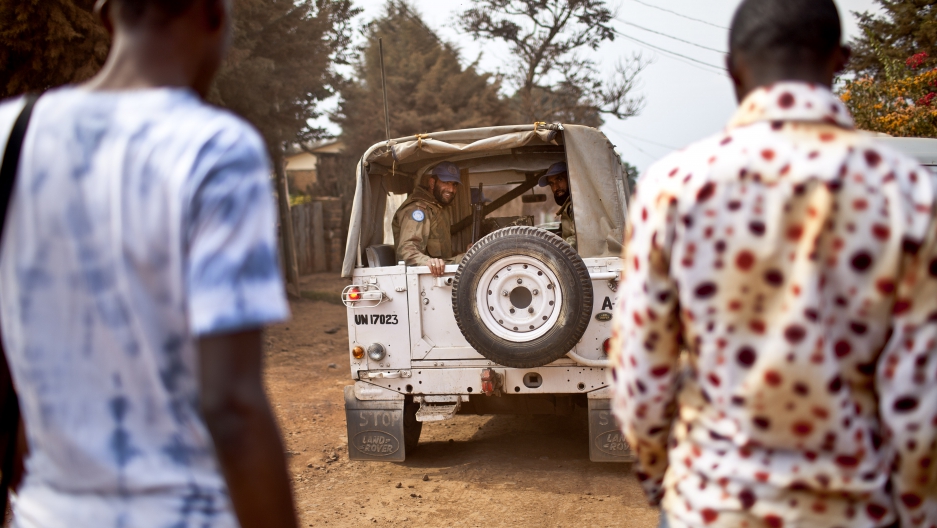 A truck of United Nations peacekeepers laugh as they pass the group from Rainbow Sunrise on the street in Bukavu, Democratic Republic of Congo.
Credit: Jana Ašenbrennerová
Share

BUKAVU, Democratic Republic of Congo — As the US Supreme Court’s ruling on marriage equality reverberates across the country to Egypt, Peru, China and beyond, many in the world are far from even dreaming of such freedom.

Though the Democratic Republic of the Congo technically has no law that makes homosexuality illegal, there is absolutely zero societal acceptance for it, which makes the idea of equal treatment a fantasy. LGBT people are routinely arrested on other charges related to “public decency” and gays often choose to remain hidden to protect themselves from physical danger and social stigmatization.

Joseph Saidi, 29, is the former president and founder of Rainbow Sunrise, a non-governmental organization that supports the gay community in the city of Bukavu in eastern DRC.

Saidi has endured police abuse in both his home country and in Uganda, where last year he was arrested and charged with sodomy, which can carry a life sentence, before a friend posted bail and he eventually fled the country.

The previous year, in May 2013, local police in Bukavu arrested, detained and abused Saidi as a strike at his activism.

"When I was in jail, I spent two days without food or drink,” he said. “I was tortured, and I was raped by three inmates. I suffered from cruel, inhuman and degrading treatment. I was discriminated against based on my sexual orientation. I was beaten by inmates. I thought I was going to die because since my birth I've never been subjected to such treatment."

After spending nine days in the hospital following his release from jail, Saidi said three masked intruders broke into his home in a murder attempt.

“I was spared because I hid in the ceiling of the house,” he later wrote.

Parents in the DRC who find out their child is gay or lesbian often react very negatively. In many cases the children become homeless overnight. Rejected by their parents, left unable to pay their school fees, many start a career as a sex worker to make ends meet. They offer sex in exchange for money to anyone willing to pay, even those that have HIV. It becomes the norm, a standard routine. But it’s not a chosen lifestyle.

When Saidi told his family the truth about his sexual orientation, their reaction was clear.

“I was Satan, a disgrace to the family,” he said. “My father no longer wanted to see me. I was not his son anymore, and he wished I would have died at birth. I was attacked physically by my uncles and cousins at the request of my mother, who also asked me not to call her mom anymore.”

Saidi stopped his studies, lost his home, and became a sex worker shortly after. Often found in dance clubs, his clients come from a range of backgrounds and professions. They are foreigners, married men with kids, politicians and even priests, he said.

The DRC is a country with a violent and dramatic history that will affect generations of people to come. Its reputation as “the rape capital of the world” only adds to the instability and misery of the population, mired in a conflict of constant fighting and threats from both foreign and local armed groups. Last month a gay man was killed by police in a jail in the town of Goma.

Rainbow Sunrise was founded in 2011 and is progressing very slowly due to a lack of funds. Still it plays a critical role for local gay men and women, providing free HIV testing, condoms, sexual education, and perhaps most importantly, a safe place to share their personal struggles with others, without having to feel ashamed, rejected or judged.

There is currently almost no legal support for the gay community outside the occasional gesture from international sources and NGOs. Their precarious situation seems to be getting worse as Rainbow Sunrise increases its activity. They have a place to meet and organize, but getting known in their community is actually increasing the risk of attack, and threats are received on regular basis.

Saidi left the DRC in 2013 after the traumatic experience in jail and the assassination attempt that followed shortly after.

He was afraid to return to his home country, as he believed he will not be able to escape the next attack and will get killed. After living in Uganda briefly and the arrest for sodomy last year, he managed to escape to Sweden where he now lives.

Reflecting on the US Supreme Court ruling on same-sex marriage, Saidi wrote from his current home in Stockholm, “I am very happy about the decision that gay couples are allowed to marry. I hope this decision will change the African homophobic mind. It’s a big victory for all the gay activists in the world."