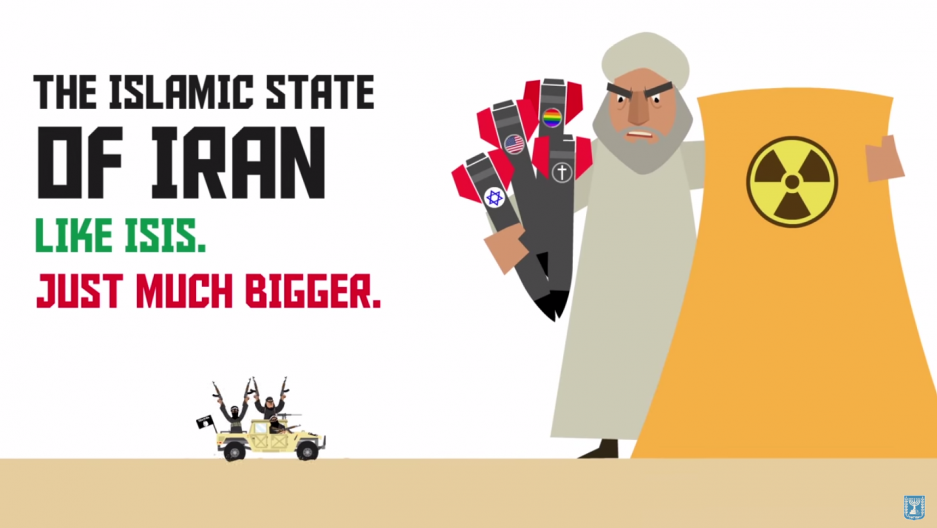 A still from an Israeli government video that argues Iran is just a larger version of the Islamic State.
Share

CAIRO, Egypt — The world is a complicated place. And the Middle East is surely a contender for the most hard-to-explain, difficult-to-understand place within it. But that’s not how the Israeli government sees it.

Over the past couple of years, Israel has taken to explaining the issues it faces in a series of cartoons that seem increasingly lacking in nuance. War, terrorism, the media — there are few subjects that cannot be explained with crayons. Of course, there is nothing wrong with trying to explain complex issues in a simple way, and political cartoons and animation have a long and storied history (see: The Simpsons, South Park).

But when done badly, the result is often a gross oversimplification, or simple propaganda. Here are a few examples:

1. Iran is the Islamic State

Just this week, the office of Prime Minister Benjamin Netanyahu — the prime minister — released a cartoon via its Twitter account titled: “The Islamic State of Iran – like ISIS. Just much bigger.”

Tasteful from the beginning, the animation shows militants in armored vehicles brandishing guns driving over kneeling orange-clad captives that explode in splashes of cartoon blood. Then the voiceover invites the viewer to “imagine how dangerous the Islamic State would be if it had armored divisions, fighter jets and ballistic missiles, imagine the Islamic State building atomic bombs.” The voice pauses: “Well, maybe it’s not that hard to imagine, the Islamic State of Iran.”

The image changes to a figure that appears to be a cleric holding missiles that have the flags of the United States and Israel (and a rainbow flag) on their tails. The symbolism doesn't really convey the fact that the US has been in negotiations with Iran for many months on a nuclear deal, engaging in diplomacy — in stark contrast with how it's approaching the Islamic State (IS).

The bigger irony is that Iran and the United States — Israel’s greatest ally — are actually de facto aligned in their opposition to IS. Iran has forces fighting IS on the ground in both Iraq and Syria, while the US is bombing the group from the air.

2. Open your eyes about Gaza

Last month, another Israeli government department produced its own similarly styled cartoon (it’s unclear whether the government has an in-house animator or hires a freelancer). “Open your eyes about Gaza,” released by the Foreign Ministry, targeted foreign media’s coverage of Gaza during the 2014 conflict with Israel.

In the cartoon, a hapless Western journalist is shown referring to Hamas building a new "subway system" as militants transport weapons through tunnels behind the camera. The reporter refers to Gaza’s “pluralistic” society as a Hamas operative abducts a fruit vendor who is flying a rainbow flag.

At the end of the video another figure provides the reporter with glasses to see the "reality of Gaza under Hamas rule," and the reporter faints.

The cartoon was released in advance of a UN report on Israel’s operation in Gaza last year. The video was roundly criticized on social media for conflating any criticism of Israel’s conduct with support for Hamas, and for minimizing the significance of the thousands of Gazans killed by Israeli bombs last summer.

The Foreign Press Association said it was “surprised and alarmed by the Israeli Foreign Ministry’s decision to produce a cartoon mocking the foreign media’s coverage” of the war.

“At a time when Israel has serious issues to deal with in Iran and Syria, it is disconcerting that the ministry would spend its time producing a 50-second video that attempts to ridicule journalists reporting on a conflict in which 2,100 Palestinians and 72 Israelis were killed,” it added.

The video has since been taken down by the foreign ministry.

The Foreign Ministry has some history in the cartoon business. At the height of the Gaza offensive last year it released a video entitled “High living and low lifes.”

The video depicted life in a fictional upscale Gaza neighborhood that showed cartoon Hamas militants abducting toddlers from playgrounds and carrying them through the tunnels. Meanwhile actual bombs were raining down on actual Gaza neighborhoods. By the date of the cartoon's release, 1,300 Palestinians had been killed, 243 of them children. By the end of the offensive those numbers would be much higher.

In the midst of negotiations between the US and Iran over the latter’s nuclear program several years back, Netanyahu addressed the United Nations General Assembly in an attempt to dissuade the international community from supporting the deal.

Rather than using an animated cartoon, the prime minister produced a picture of a cartoon bomb to explain how Iran could gain a nuclear weapon. It did not go down well.

The episode was even mocked by the White House, who used Netanyahu's cartoon bomb mock-up to show how the deal they were negotiating would actually prevent Iran from getting a bomb.

The White House trolled Netanyahu by tweeting this cartoon of a nuclear bomb http://t.co/FuPz4g11fe pic.twitter.com/XHm7RU6Gh3

That is not to say none of the government's cartoons are helpful. This one explaining the Israeli electoral process (presumably for an American audience — "Don’t you elect a president?") appeared to be an honest attempt to explain something quite complex. And this one that marked the visit of Pope Francis to the Holy Land, in which the Holy See and the State of Israel become friends on Facebook.

Of course, that was before the Vatican signed a treaty recognizing the State of Palestine.