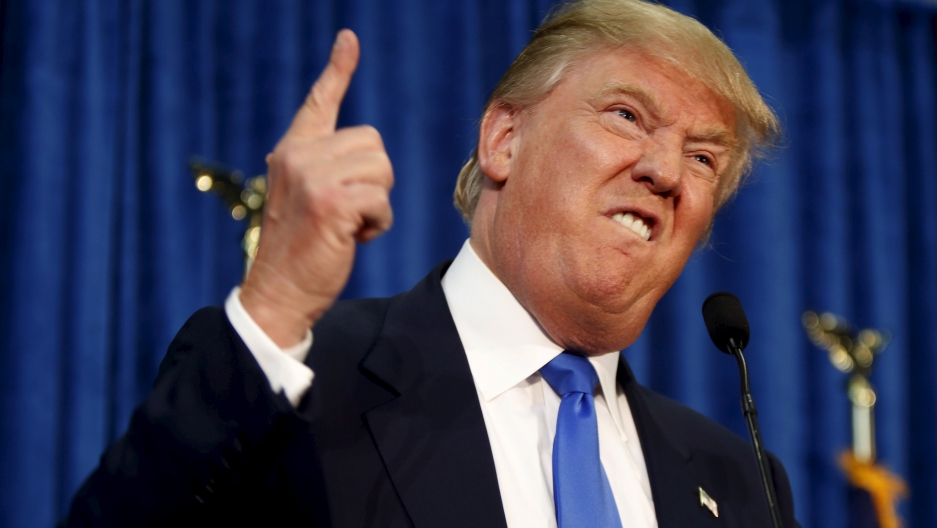 When it comes to the latest company to ditch Trump, Macy's, the businessman and Republican Party presidential candidate says he cut ties first.

Will the last person to fire Donald Trump please turn off the lights?

I guess this kind of thing happens when a presidential contender and real estate mogul says Mexican immigrants are "bringing drugs, they’re bringing crime. They’re rapists." And it certainly doesn't help when he says John McCain, a respected senator, previous presidential candidate and prisoner of war isn't a war hero.

Since these comments over the last few months, more and more people are jumping off the Trump train. We figured that it was a good time to put a face to the (many) names and companies. 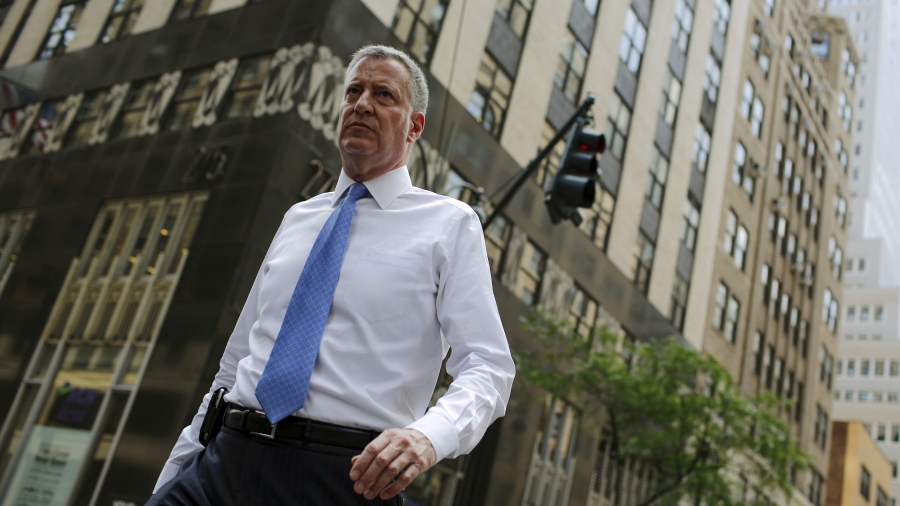 During a press conference Monday, New York City Mayor Bill de Blasio said he's not sure whether the city can break the existing contracts it has with Trump, "but we're certainly not looking to do any business with him going forward."

De Blasio said he's waiting to hear back from several analysts about the city's options when it comes to the current agreements it has with the real estate developer and politican. Those include a Central Park carousel, a Bronx golf course and two ice skating rinks, according to The Hill.

In past weeks, Trump has doubled down on his immigration comments, but added to the controversy surrounding him by claiming that Sen. John McCain is not a war hero. McCain spent more than five years as a prisoner of war in North Vietnam.

"What Mr. Trump said about Senator McCain was unacceptable," de Blasio said. "Senator McCain is a war hero by any measure, and [Trump] should really apologize for that. And I've said repeatedly Donald Trump doesn't represent the views of the people of this city — certainly not of the majority." 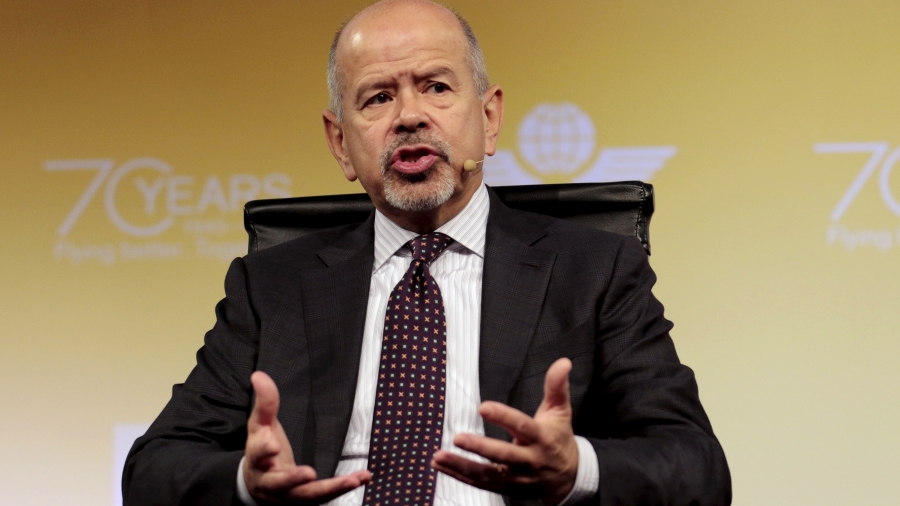 The Federal Aviation Administration announced they would be renaming three of their navigation points above Palm Beach International Airport. Trump's coordinate names were DONLD, TRMMP and UFIRD, after the catchphrase from his popular reality show "The Apprentice".

The names of the navigation points are entered by pilots when plotting a course from one airport to another. Trump's name and catchphrase were attached to the navigation points in 2010, after a suggestion from an air traffic controller who was a fan. "In general, the FAA chooses names that are noncontroversial," Laura Brown, an agency spokesperson, told The New York Times.

When asked how he felt about his name being booted, Trump referenced his campaign slogan. "'Making America Great Again' is far more important to me than an honor I never knew I had...meaning a blip on a radar," he said.

According to the Times, however, Trump spoke to a reporter in 2010 and said he was flattered his name was chosen. 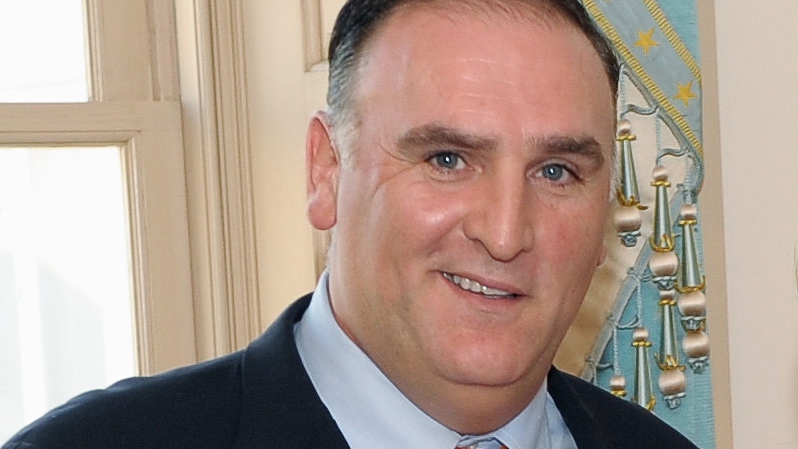 Andrés announced he would no longer be opening one of his restaurants in the future Trump International Hotel in Washington DC. Andrés was born in Spain, and became and American citizen two years ago.

"More than half of my team is Hispanic, as are many of our guests. And, as a proud Spanish immigrant and recently naturalized American citizen myself, I believe that every human being deserves respect, regardless of immigration status" Andrés said in a statement.

This news comes on the heels of another revelation about Trump's $200 million, 270-room luxury hotel in progress: That many of the people building it could, in fact, have come to the US illegally. The Washington Post reported that several workers on site earned citizenship or legal status through various immigration programs, while others admitted that they were staying in the US illegally.

4. Pete Bevacqua, The PGA of America (as well as ESPN and the LA Galaxy) 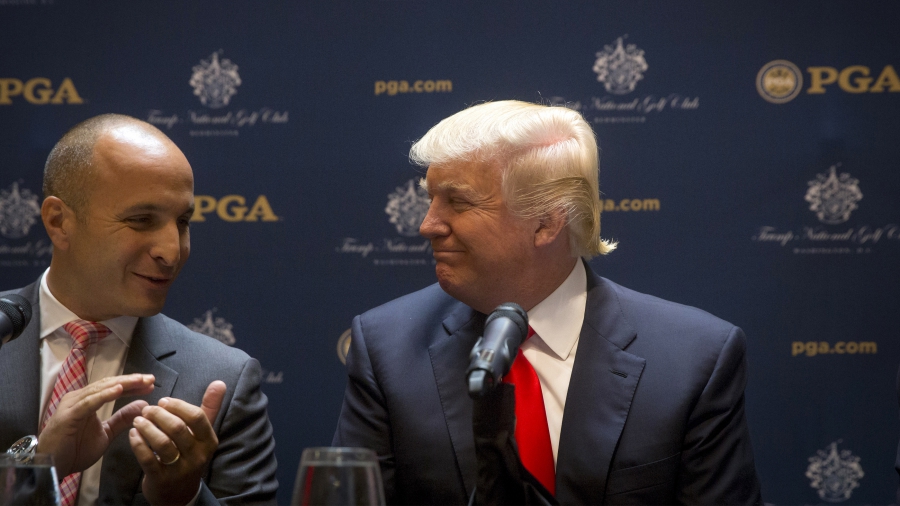 The PGA of America released a statement announcing that they had chosen to relocate their 2015 PGA Grand Slam of Golf. The competition was originally going to be held at the Trump National Golf Club in Los Angeles. Last week, Trump told the Golf Channel that he has had "tremendous support from the golf world, because they all know I'm right."

In response, the PGA Tour, PGA of America, The Ladies Professional Golf Association and the USGA all released a joint statement rejecting Trump's warm and fuzzy feelings toward the golf community.

The more recent statement about the moving the location of the tournament makes no explicit reference to Trump's derogotary statements about Mexican immigrants, instead calling the choice a mutual agreement.

The PGA Grand Slam of Golf isn't the only prominent tournament to cut ties with Trump in recent days. On Monday, ESPN announced that they will change the location of their ESPY Celebrity Golf Classic from Trump's golf course to Pelican Hill Golf Club in Los Angeles. Their decision came on the heels of an announcement from The Galaxy Foundation, which represents the professional soccer club the Los Angeles Galaxy. They also pulled their annual charity golf event from Trump National in Rancho Palos Verdes. 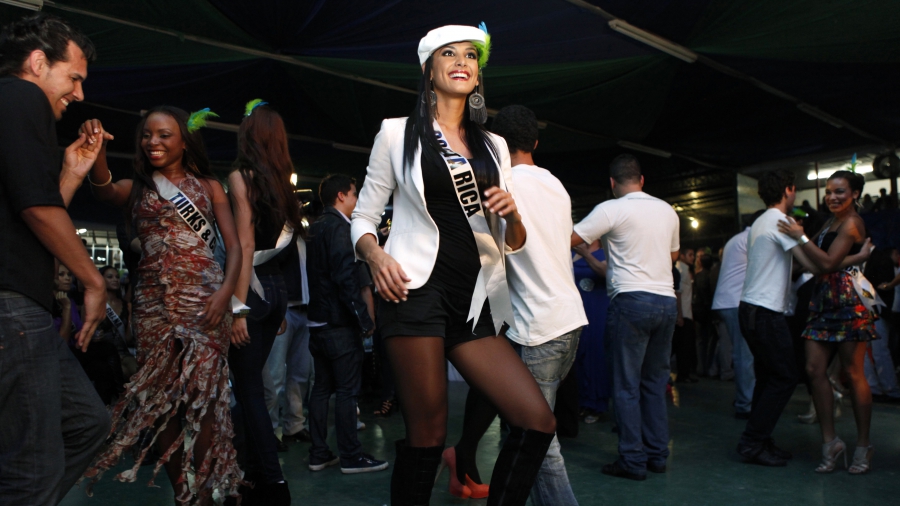 Television company Televisora de Costa Rica announced that it would be pulling its broadcast of the Miss Universe pageant, adding that they wouldn't be sending the winner of the upcoming Miss Costa Rica competition either. Pictured above: Miss Costa Rica 2011, Johanna Solano.

In addition, Serta — the largest mattress manufacturer in the US — severed ties with the businessman and politician. They said they won't be renewing their contract to sell Trump Home-branded mattresses at the end of the year. 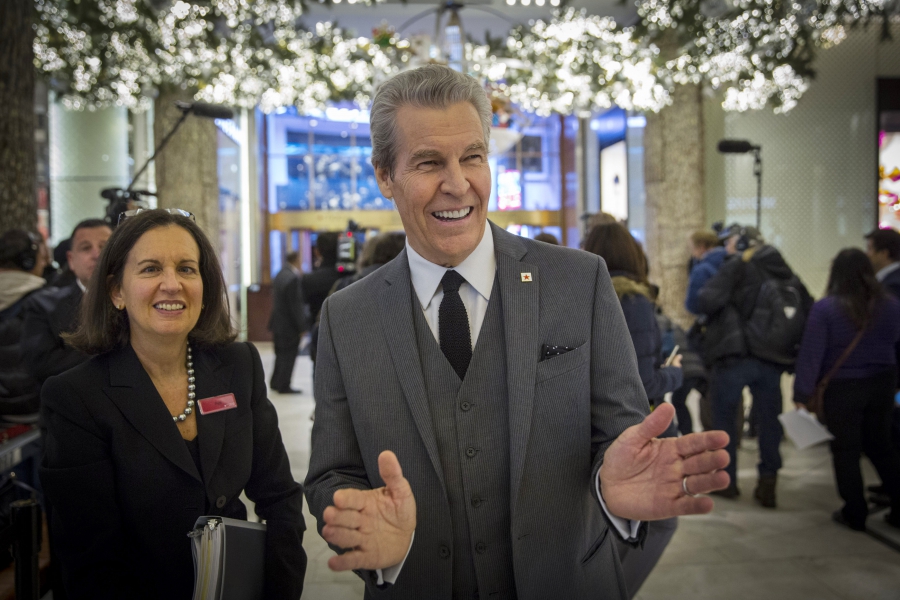 Macy’s, headed by Terry J. Lundgren, above, decided to pull all Trump merchandise from its stores. The department store faced an immense amount of pressure to end their relationship with Trump in the form of a MoveOn.org petition that had collected almost 730,000 signatures as of Wednesday morning.

7. Lupita Jones (and all of Mexico) 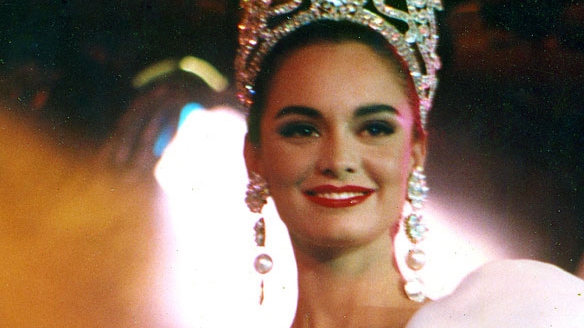 The country of Mexico, represented by 1991 Miss Universe champion Lupita Jones, has also abandoned Trump. The media company Televisa announced that they wouldn’t be sending a contestant to the competition to represent Mexico.

Mexico’s richest man and Ora TV head, Carlos Slim canceled a project he was working on with Trump. Slim’s spokesman and son-in-law Arturo Elias said in a statement that “working with someone so closed-minded was not going to work.”

Later that day, the Latin American owners of 5 Rabbit Cerveceria pulled their house beer from Chicago's Trump Tower lounge. In a statement to WBEZ, a local radio station, they wrote that they couldn't continue, as members of the immigrant community, to support Trump.

"We would be doing an injustice to the community we serve (and live in) by engaging in business with someone who does not accept our role in society and expresses a rhetoric of hate and ignorance towards us," they wrote.

NBC Universal, headed up by Burke, axed the businessman and Republican Party presidential candidate. This move means that the network won’t run the Miss USA pageant for the first time in a decade, but will also cancel Trump’s popular “The Apprentice” series. The show’s spinoff, “Celebrity Apprentice”, will continue, but Trump won't be involved.

“Dancing with the Stars” host Cheryl Burke announced that she wouldn’t host Miss USA either, citing Trump's immigration comments as the reason. Her co-host, MSNBC anchor Thomas Roberts, hasn't released an official statement, but did publish a tweet.

Best of luck to all #MissUSA2015 contestants this year & THX to the good people behind the scenes @MissUniverse - been a joy working w/you! 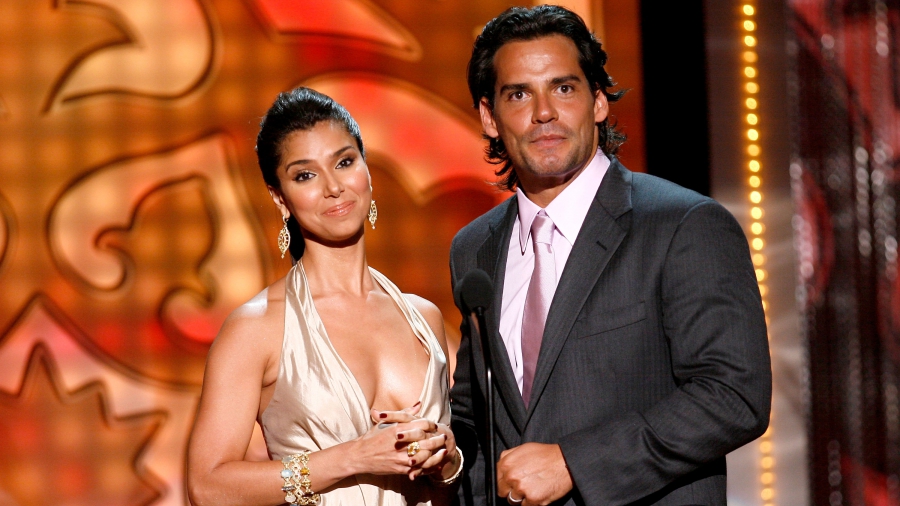 De la Fuente and Sanchez also backed out of their agreements to co-host the Spanish-language simulcast of the Miss USA pageant.

“I was very excited and proud to have been invited to participate in Miss USA, but as a Latina, that is now inconceivable,” Sanchez said in a statement. “Although I am not Mexican, I am Puerto Rican and a proud Latina, and his comments were an insult to our culture.”

Falco's Univision dropped its telecast of the Miss USA pageant and severed all other business ties to Trump on June 25. Trump has since filed a $500 million lawsuit, accusing the company of breach of contract and defamation.

The Colombian singer was slated to perform at the Miss USA beauty pageant, held by Trumps’ Miss Universe Organization, on June 12. Balvin had never performed on national television before, but said he stood by his decision.

“We’re talking about our roots, out culture, our values,” he told Billboard. “This isn’t about being punitive, but about showing leadership through social responsibility. His comments weren’t just about Mexicans, but about all Latins in general.”

However, Trump isn’t completely alone. He still has his Miss USA pageant — albeit without a television broadcaster to show it. And he has “Fox & Friends,” as well as a cadre of right-wing supporters including Sean Hannity, Bill O’Reilly and Megyn Kelly.

“The thing with Donald Trump,” said Steve Doocy of Fox & Friends, “after it was announced that NBC was severing ties with him, he didn’t back down. In fact, he doubled down. People like that about Donald Trump.”

For more information about just some of the companies that have cut ties with Trump: