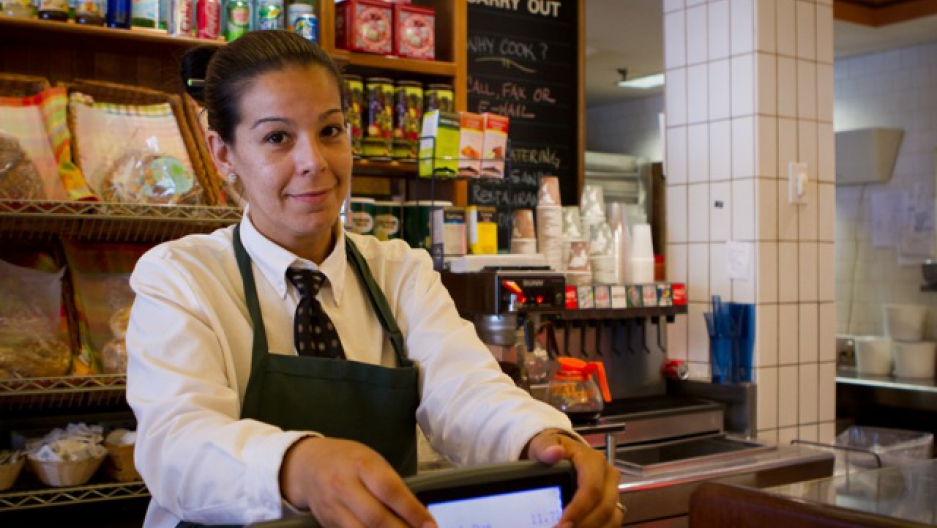 Sally Teixeira studied to be a medical administrative assistant, but she now works at a deli in Cambridge, Mass.

The federal government is poised to forgive college loans for thousands of students who attended Corinthian Colleges, the now defunct for-profit giant under investigation for misleading students about graduation and employment rates. Secretary of Education Arne Duncan called Corinthian a "wake-up call for consumers across the country about the abuses that can exist within the for-profit college sector." Unfortunately, for the thousands who attended Corinthian, that call was too late. Many of them not only have loans, but are also unable to find jobs.

And they are feeling very, very misled. Lied to, is the way Massachusetts' attorney general has put it.

For Sally Texeira, the promise was to become a medical administrative assistant. The reality: working the counter at a deli six years after graduation from Corinthian's Everest Institute.

Teixeira hasn’t been able to find a job at one of Boston’s many hospitals. She has $10,000 in student loan debt, and worries she’s being passed over in favor of other candidates because she has a degree from an institution under federal investigation.

“I don’t know if it’s because they see Everest on there. I’m not sure,” Teixeira says. “I’m fluent in two different languages. I have experience in medical records. So it’s like, ‘Why can’t I get the job?’”

As Teixeira continues to look for work, she might be off the hook for loans she got from the federal government. That's because she's among 15,000 former Corinthian students across the country — 4,000 in Massachusetts — who could qualify for loan forgiveness.

At its peak, Corinthian had more than 100 campuses and 72,000 students. In Boston, Corinthian once had two campuses — one in Brighton and another in Chelsea. Both closed earlier this year after the Education Department found the college guilty and fined it $30 million. Corinthian says it didn't do anything wrong, and plans to appeal.

The government has appointed a monitor to oversee claims. Students eligible for relief will have to apply individually, and demonstrate that they were deceived.

Healey says Corinthian isn’t the only school that misleads.

Brittney Patient says that's exactly what happened to her. The former Corinthian student remembers sitting at home, watching midday TV when the Everest commercial would air.

“And every single commercial is the guy standing in front of Everest Institute,” Patient says. “'Get off the couch. Call now. Make the best decision of your life. Go to college. Eight months. You get the certificate. You're done.' And then they repeat the number like 17 times."

Patient was a young, single mom, with no high school degree. She says she called the number because she wanted to make her son proud.

"I wanted more than anything to show him that the way of life isn't the way that I was brought up,” she says. I wanted him to know you go to school, you learn, you get a degree."

At Everest, Patient says a recruiter pushed her to enroll and promised her a starting salary of at least $22 an hour.

“I just felt very rushed and I said, 'Well, Brittney, if you don't do it now, when are you gonna do it?' And I did it and it was one of the biggest mistakes of my life."

Patient has since defaulted on her $9,000 in student loans. She hopes that mistake might be forgiven later this year when the Education Department makes recommendations on debt relief claims.

Last week, a federal judge cleared the way for regulation making sure students who enroll in career training programs earn enough to repay their student loans. The so-called gainful employment rule went into effect on Wednesday.

Former Corinthian students can find out more information at studentaid.gov/corinthian or by calling (855) 279-6207.