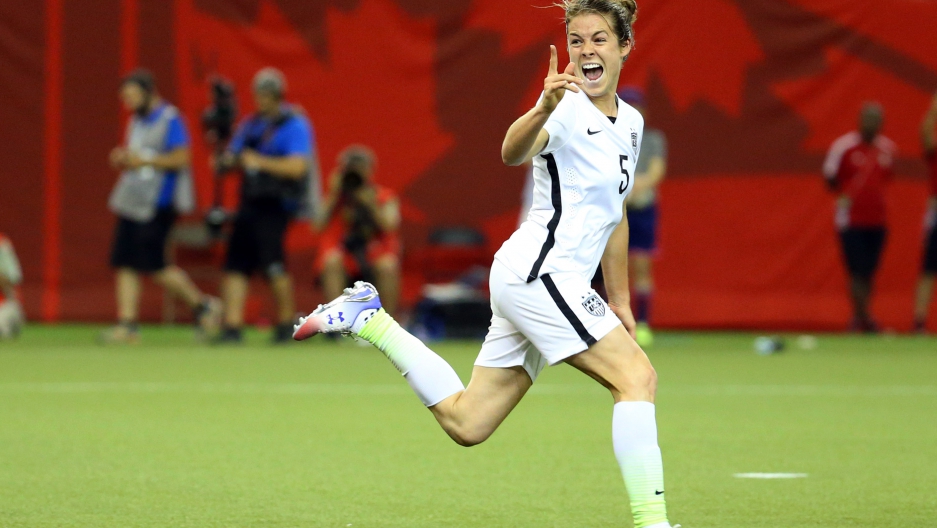 Kelley O'Hara of the US Women's soccer team celebrates her one-touch goal in the 2-0 semifinal victory over Germany. The US advances to the Women's World Cup finals on Sunday in Vancouver

Who needs the boys? After watching the Women's World Cup in Canada this week, I'm struck by three things:

1) How much more enjoyable it is than the men's World Cup, or at least last year's event in Brazil.

2) How much younger the crowds are.

3) How much room there is for growth.

If the corruption-riddled poobahs who operate world soccer were smart, they'd recognize the huge opportunity they have with women's soccer — not just for gaining fans, but for cleaning up their own muddied act by embracing the relatively controversy-free side of the sport. Of course this is the same organization whose former head had two Big Ideas for improving the women's game — tighter shorts, and shorter shorts.

The US team gets $2 million in prize money after its 5-2 victory over Japan on Sunday night. That's double the winner's take for Japan from 2011, but pales in comparison to the $35 million that the German men's team took for winning last year's World Cup in Brazil.

In Brazil, the pressure always seemed to be on. The stakes were so high, as were the demands to maximize cash. Did that pressure produce the odd decisions to award the next two men's World Cups to Putin's Russia and steamy Qatar? (On the women's side, France will host the 2019 cup. No muss, no fuss.)

In Canada, watching a noisy, flag-waving crowd cheer on the United States, there was tension, to be sure, but it was where it should be: On the outcome of the match.

Oh, the beautiful game: The US team improved throughout this World Cup. And Carli Lloyd showed the way for a new generation of players to step forward from the stalwarts of competitions past, such as Abby Wambach. And on Tuesday, the US viewing audience was the highest ever for a non-final women's World Cup match, part of a steep rise in interest.

How did the game compare with the men's competition in Brazil? I’m lucky that last year, I went to the most important US game of the tournament, a playoff against Belgium in Brazil, and this year, there I was for the semifinal with the US women against Germany. The matches were equally intense. The crowds were packed with Americans really screaming their lungs out so in that way they were very similar.

But I did notice some differences, like the fans. Maybe it’s because we’re so close to Canada. Or maybe it’s because it’s the US women, who attract a crowd that is much much younger, basically a lot of girls, teens and under. In Brazil, there were not that many kids in the stands.

And that's the promise for FIFA, if it would ever take women's soccer seriously. If FIFA did put more of its vast funds into the women's game, it could have a big effect beyond sports worldwide.

But because it's FIFA, those are big ifs.