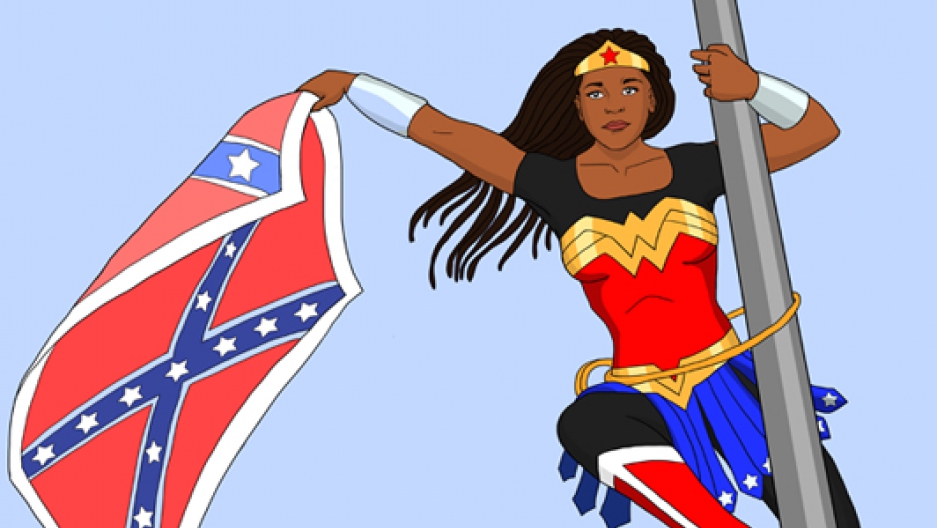 Bree Newsome became an Internet and media sensation when she did what many were longing to do but didn’t dare. She scaled a flagpole outside South Carolina's statehouse and brought the flag down, while police officers waited to arrest her below.

Her actions, and the instantly iconic photos that accompanied them, inspired scores of retweets, headlines, conversations and debates. They also inspired artists.

“Seeing her do that, and then when she came down and they were putting her in custody and she had a smile on her face because she knew she was doing the right thing, it touched me, so I was like I had to do something about that,” says Niall-Julian Watkins, a 25-year-old illustrator who lives in Oak Grove, Kentucky.

A single image fundamentally changed the national debate over the Confederate flag and its meaning: Dylann Roof posing with it before he went on his murderous, racist rampage. The photos of Newsome, taken by James Tyson, captured the nation’s attention in a different way. Both Newsome and Tyson are facing charges of defacing a public monument and could spend up to three years in jail, if convicted.

Watkins drew Newsome without her helmet and ropes, holding the flag in one hand and gripping the pole with the other as she looks down. He posted the drawing on Twitter. It was shared more than 3,000 times and featured on Upworthy.

He wrote the word “still” below the image. It’s a reference to rapper Lupe Fiasco’s lyrics, and a nod to the tradition of black women activism.

“I think everyone was kind of waiting for someone to have the courage to take that down, so when it happened, everyone looked, and was like ‘Thank you,’" he says.

Artist Rebecca Cohen took a different approach. She illustrates a feminist comic strip featuring female superheros, so it seemed natural for her to depict Newsome in the same vein.

“The photos of her were already iconic and historical in nature, everyone recognized that immediately. I was using the wonder woman iconography because it immediately invokes a whole number of ideas,” Cohen explains. “I liked the immediate associations invoked by the Wonder Woman iconography — the all-Americanness, the feminism, empowered women. All of that stuff sort of comes together really crispy with Wonder Woman. I like the idea of blending that established character with this sort of real-life superhero.”

As a white artist who is supportive of the #BlackLivesMatter movement, she felt it was a way she could contribute.

“As a white ally, sometimes it feels like there is not very much I can do, so this was a little something that I could.”

He was moved by the calm, serene expression she had as she was being arrested, and, like Watkins and Cohen, he drew her without the harness and ropes. "She became a mythical figure right before my eyes and that's what I wanted to convey," he says.

McGowan thinks students and historians will be looking at the images of Newsome for some time to come.

"It’s the shot heard round the world. It’s a sit-in. It’s burning bras. It’s the sort of thing that you know you’re going to read about in the history books,” he says.