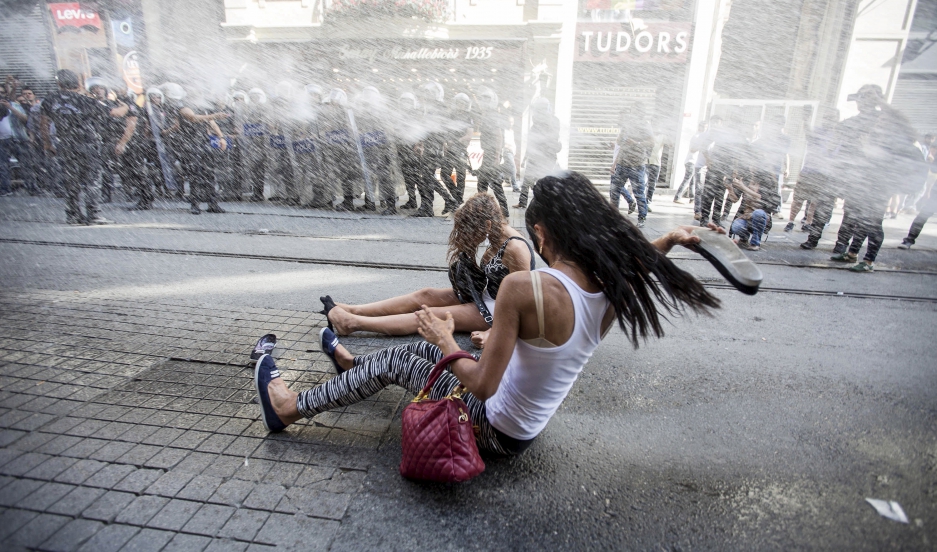 The Istanbul Pride Parade on Sunday seemed like it was going to be of special significance for the Boston Gay Men’s Chorus — and it was, but not for the reasons they would have hoped.

Instead of celebrating a successful performance in Istanbul the night before and the US Supreme Court’s Friday decision to legalize gay marriage nationwide, they were turned away from the parade by Turkish riot police after authorities cancelled the rally with little notice. The chorus members then watched as police dispersed defiant local marchers with water cannons and rubber bullets.

“Some of our members witnessed unprovoked violence and aggression toward pride march participants,” said chorus executive director Craig Cooga in a statement posted to Facebook. “That is why cultural exchange means so much to audiences in places like Turkey and around the world, where the promise of full equality still lies in the distance, and events from political action to cultural experiences can inspire hope.”

Turkish activists captured the scene as the chorus members were confronted by police:

On Saturday the chorus had become the first international gay choral group to perform in Istanbul, and not with little effort. Conservative media outlets had campaigned against the concert, causing the first show date to be cancelled, until a local university stepped in to host the group. Ultimately it was a peaceful event that went off without a hitch, with “concert-goers dancing in the aisles,” according to the group's statement.

But the good feelings were tempered by what the group witnessed the next day. The city’s governor's office said the pride parade didn’t have the correct permits. Organizers said they were told it was cancelled because it was scheduled to occur during Ramadan, though past parades, including last year's, were also held during the Muslim holy month.

Police used tear gas, rubber bullets and water cannons against the marchers, and the resulting images quickly traveled through social media. Lady Gaga and The Council of Europe Commissioner for Human Rights both condemned the crackdown.

Governor! Set an example for people to celebrate both Ramadan and Pride in PEACE, instead of dividing with violence! #OnurYuerueyuesue

Cooga said he saw a connection between the groups performance in Istanbul and the years of activism that lead to the historic Supreme Court decision on Friday.

“We join Lady Gaga and others who have expressed outrage for the way Pride-goers in Istanbul were attacked by police during peaceful celebrations of love, and we will continue to use our art to inspire social change, as we did during the marriage equality battle in Massachusetts,” he said.

For their part, local LGBT activists remained defiant. Yıldız Tar, a 25-year-old editor for a local LGBTQI news site, was among those detained by police at the pride parade.

He said police arrested him after he tried to take photo of officers, who kicked and punched him in the back. He was taken to a side street and held there until his lawyer arrived. He was released without charge or documentation.

He was there when police starting using water cannons on the marchers in Taksim Square. While the main crowd dispersed, he said other groups marched down side streets, shouting and laughing at police, many with rainbow flags in hand.

“This was a horrible day, but we won,” he says. "We won because we were in the street. We didn’t let them just get us out of the street.”

Gay pride parades have been held in Istanbul since 2003 without police interference. Among the widest circulated images this year showed another effect of the police water cannon — a rainbow.

“Next year there will be a bigger crowd,” he says. “If they attack, we will resist, and this will continue.”

After the Boston Gay Men's Chorus returned to Boston, Reuben M. Reynolds, the music director, visited The World's studios to debrief from the group's trip. He says it was eye-opening to see how long it takes to change people's minds. However, he says he hopes their performance helped to advance the cause of gay rights in Turkey, even if just by a small amount.

"Most of the people in Istanbul are just beginning that long journey," he says. "We've reached near the end and they're just starting the journey we started 35 years ago."

Moira Lavelle contributed to this report.